High winds and twelve foot waves described the weather conditions during the 20th year of the Spanish Town Fisherman’s Jamboree (STFJ) – Wahoo Madness tournament. It is said that the high winds and sea was the second worse weather since the tournament’s inception which was the cause for several other boats to pull out from the competition, including four from St. Maarten.

Despite the weather, the anglers all had a good two days of fishing with Lady Evelyn, stealing the spotlight at the Jamboree, after capturing the first and second prize for the heaviest wahoo, the heaviest overall wahoo and the heaviest other catch in the two-day competition.

“I feel really good, we went out there and we did a good job and win it;” Leslie “Shabba” Shortte one of the anglers of the Lady Evelyn vessel said at the prize giving ceremony at the Fischer’s Cove Beach Hotel in Spanish Town on Sunday 27 March 2016.

The famous vessel brought in the heaviest wahoo at 43.8 lbs which was caught by Trevor John and captained by Dr. Hubert O’Neal who is also the 9th District representative in the Virgin Islands. 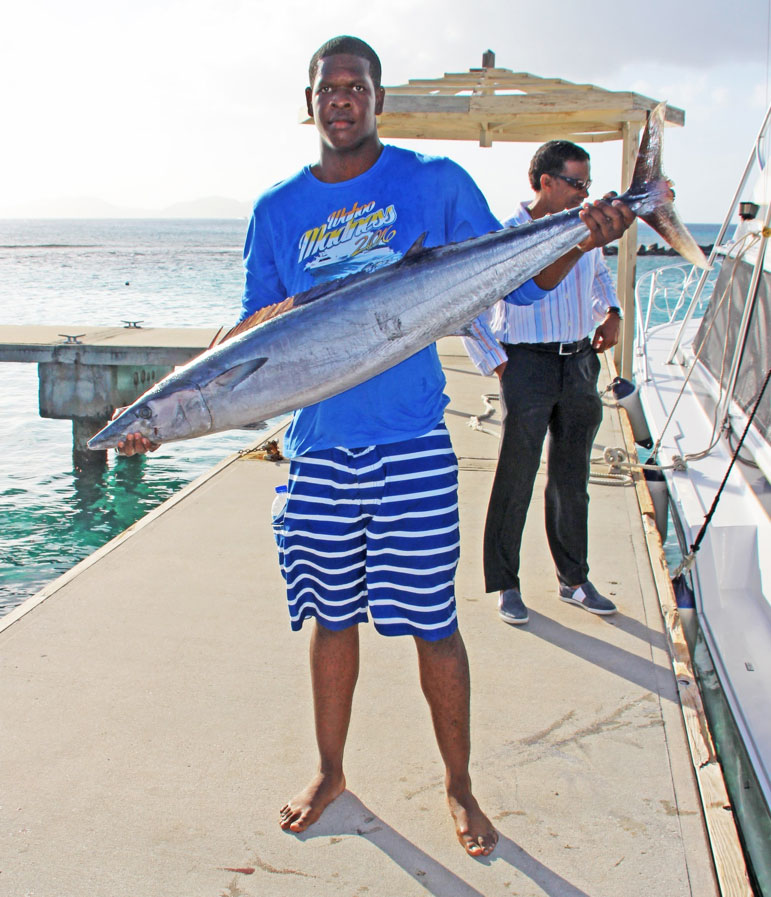 The second prize for the second heaviest wahoo came in at 36.5 lbs was caught by William Bridgewater, another angler from the vessel-Lady Evelyn, copped the second prize trophy, a monetary prize of $2,000.00, lunch for four at Fischer’s Cove, one haul and launch compliments of Virgin Gorda Yacht Harbor, Wahoo Madness 2016 gift pack and insurance valued at $250 from Colonial Insurance.

The third prize of the heaviest overall wahoo weighed 80.3 lbs was another catch that the vessel had under its hat. This time, it was caught by William Bridgewater and Trevor John.

That catch earned the third prize trophy, $1,000.00 as well as dinner for four at Rock Café Tree House, a Wahoo Madness 2016 gift pack and $250 worth of insurance thanks to Colonial Insurance.

Captain of Lady Evelyn, Dr. Hubert O’ Neal received $10,000 from the Captain Poll and indicated to Festival Forever Magazine that the Virgin Gorda Senior Citizens Home will receive the bulk of the cash for the purpose of acquiring new furniture.

There was an honorary mention of Captain Donnell Flax who owns the vessel BIG TING. He received a special trophy, a Wahoo Madness gift pack and $250 insurance from Colonial Insurance for participating in Wahoo Madness 2016 for the 20 years.

He is one of the founders of the tournament and an inspiration for other fishermen to join in the Tournament every Easter.

Flax said despite bad weather the Flax family intends on having the festival for another 20 years, for the competition gets better every year.

Other awards went to the following:

CATCH:  only female angler but had some adversities