Keeping it Cool with Princess Pops

These have got to be the cutest little entrepreneurs EVER! VI Life & Style caught up with them at their booth at Plant Wise, where they sat with all smiles. They were eager to talk in the microphone and have their pictures taken!

Let’s meet the young ladies and learn about them.

Majestic is five years old. She attends Enid Scatliffe Pre-Primary School and is in first grade. She immediately told us when her birthday is, but we aren’t sharing the little lady’s secret. Her favorite subject is Math. She doesn’t know how to count money yet, but her favorite thing is to study Math. One can surmise she is well on her way to being a true mathematician. She also LOVES Science and knows where her iris and the pupil are. Her favorite thing to do is play with her ‘pretty, big sister’. (You have to hear her say that. Her voice is so adorable!) She also loves her business.

Jubilee (whom we affectionately call in a song-like manner ‘Jubie-Doobie-Doo’) was anxious to be interview next. She is six years old. She also attends Enid Scatliffe Pre-Primary School and is in first grade. Her favorite subject is Language Arts. She likes writing and listening to instructions so she can write them down. She loves the sight words done in class. She loves making slime and reported that you need glue, an activator, and baking soda. You get your color (hers is galaxy blue) and mix it up. What she likes about being in business is just that: being in business.

Negesti is really prime and proper. She has the mannerism of someone much older than her eleven years. Considering she reported that her name means queen or princess, this must be why. She commands the stage when she speaks. You have no choice but to get lost in whatever she is saying. She has power! She attends Althea Scatliffe Primary School and is in the sixth grade. Her favorite subjects are Language Arts and Science. We think she might be a little poet. She loves learning words and understanding their meanings. In Science, she prefers experiments. She uses the skills she learns in Science to make the pops she is responsible for making. Negesti said her favourite part about being in business is making the customers happy. She loves giving them the Princess Pop they need to cool their bodies down. She uses her Language Arts skills to greet her customers and her Science skills to combine fruit to make tasty combinations.

Nahyamka is a cute 8-year-old in third grade at Althea Scatliffe Primary School. Her favourite subject is Language Arts. She loves compound words and learning new words. Nahyamka said she loves being a business owner and doesn’t find it hard to do. The hardest part, she disclosed, is counting the money. She said no one except Negesti and Deyonce can count the money because they don’t know how to count money. What was disheartening for this reporter to hear was that Nahyamka does not like Math! (Yes, I took it personally because I love Math.) She doesn’t like having to round numbers up. At VI Life & Style, we are sure this is what she is currently learning in school and will easily grasp the concept soon enough. Nahymaka did say she is getting better at Math and giggled at the idea of being a multi-million dollar businesswoman.

Deyonce is ten years old. She attends St. George’s Primary School and is in fifth grade. Her favourite topics are spelling and phonics (another one loving Language Arts). She finds these topics relatively easy. She finds that being a business owner can be difficult at times, especially when she has to stay up after school and homework to make Princess Pops. She doesn’t shy away from work, though. She also helps as a cashier for the business.

The cool thing about this team is they are learning just that: how to be on an empowered team of GIRLS. Each person is responsible for making a flavour or two of pops. They make starfruit, basil, passion fruit, and pineapple. They keep up with how much money they make, take ‘tally marks of what they sell’ (inventory – which is a word they are familiar with), break up the work among themselves while on duty, and take the responsibility of selling their pops with pride. They are an exemplary example of girls working together and getting the job done.

The parents of the girls are very supportive. They are currently investing their money into the girls’ business. Sure, the girls are making money, but the money they are making is divided among them. When asked how they decide how much money they get each get, Negesti replied, “It’s complicated. We give out the money based on how much we have at a certain time. Once we reach [a number] (I’m not telling the amount, but it’s a lot for under 12-year-olds), we give each team member their cut. We spread it out like that. Our parents are the investors in our business.”

Majestic added to this, “Our parents are nice!” That they are, Majestic, that they are. 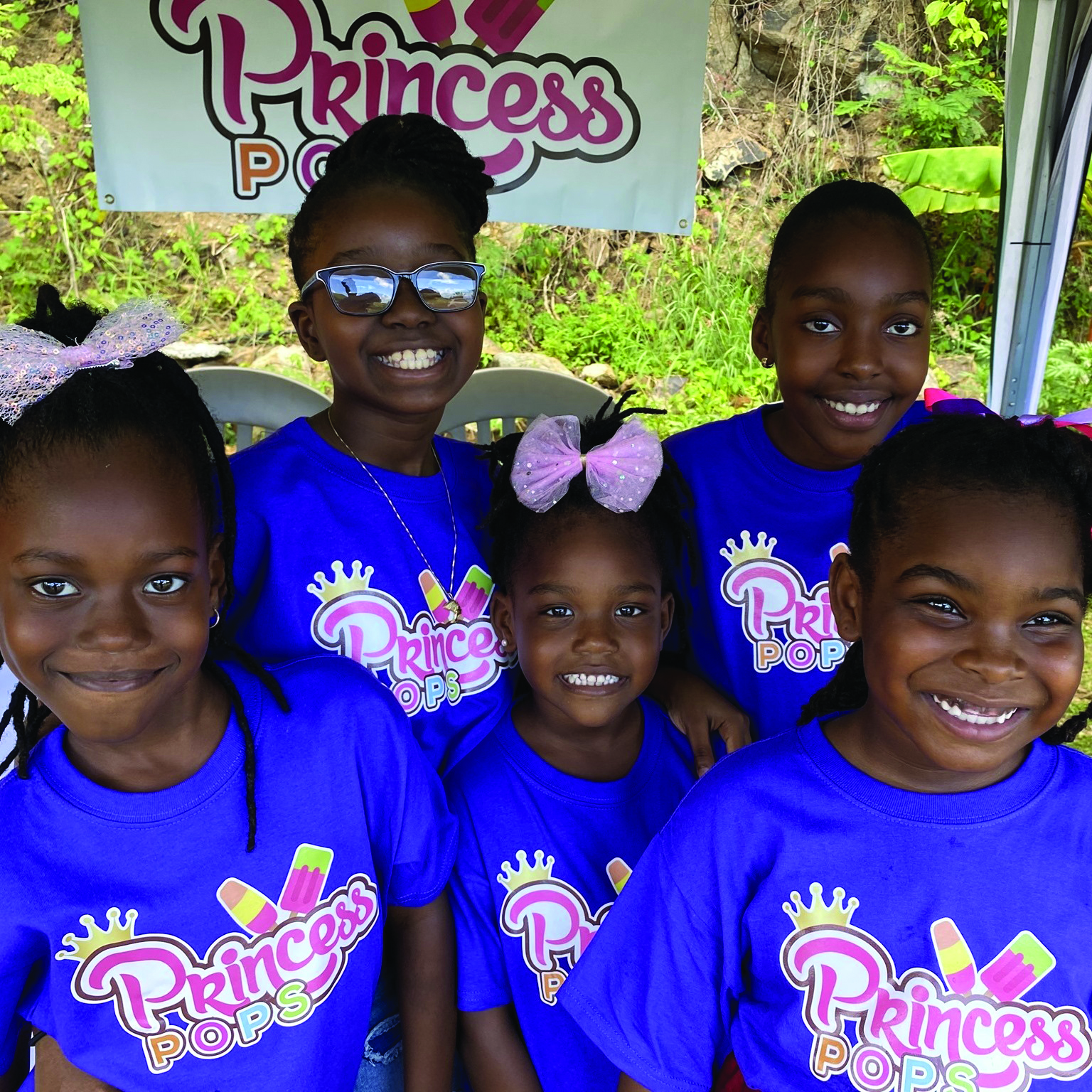 We at VI Life & Style enjoyed spending time with these little girls. They are full of energy and have such a positive light around them! There is no way you can end up at Plant Wise and not purchase from them as well. These Young Entrepreneurs can be found on Great Mountain at Plant Wise. You can make contact at (284) 346-8485 or via email at plantwisebvi@gmail.com.