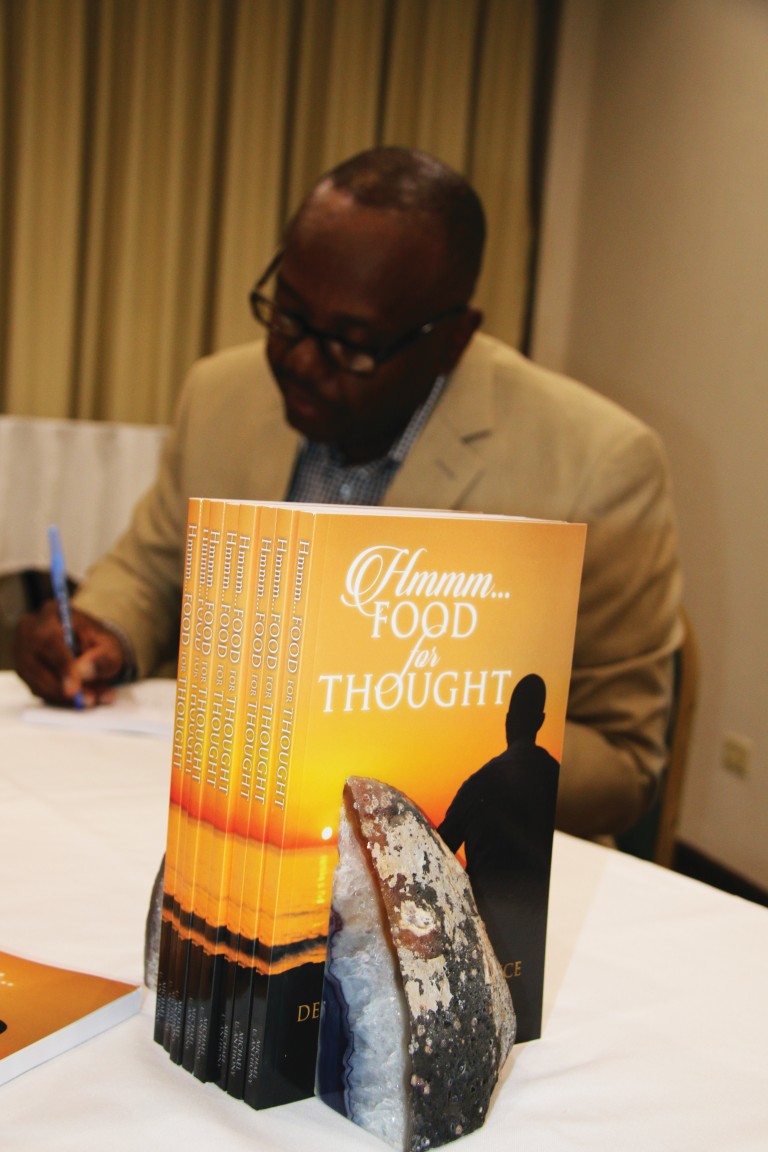 e you ever started reading a book from the back? Maybe not, because we are most times warned not to. I suggest, however, when you get a copy of Michael Anthony’s first book – Hmmm…Food for Thought – that you do just that, start from the back cover and I am convinced that you’ll be blessed in an instant.

It started in October 2004 when the BVI’s newest author, Michael Anthony, wrote his first devotional for the popular weekly broadcast ‘The Voice of Hope’. By the time he got started on the book, he had already written 42 devotionals and added an additional ten, which were all enhanced by adding declarations, which he said, “makes the work what it is” – Hmmm… Food for Thought.

Hmmm… Food for Thought was made available on Amazon Kindle on April 4th and on the first day it became available, the book sold in Canada and U.S.A. A church in Pittsburgh, when they heard of the book, down loaded 28 copies to use for bible studies.

The BVI was officially introduced to the devotional, Hmmm… Food for Thought, on May 4th  by way of a book launch held at Maria’s by the Sea Hotel in front of a large gathering who excitedly responded to the invitation. The ceremony in no way lacked comedy, inspiration and pride with the presence of the Holy Spirit in the midst.

Many spoke kindly of the author, Mr. Michael Anthony. In her remarks, Mrs. Jennie Wheatley, boosted with pride as she reflected on Michael’s past as a former English language student and being “an East End Man”.  She remembered him as a student who exerted little effort to achieve high marks.  Dr. the Hon. Kedrick Pickering, another proud East End man, in his tribute recalled his relationship with the author from childhood days going to each of their grandfather’s pasture and being in the same class with Mrs. Wheatley.

Pastor Mills informed the gathering that the devotional challenges us to face life’s issue as it relates to our faith, our family, our friends, our finances, our fears, our failures and our future. It also challenges us to make God the priority of our lives, put first things first, cultivate an ear to hear God’s voice and to seek God’s face daily. He mentioned that the segment of the book that speaks to him most is one entitled ‘Temptation and Sin- Abiding in the Law’ and the devotional that stood out most is ‘The Transgressor’. “In it, we are reminded that as human being we are prone to failure and to live lives tempered by many failures and few successes. Since successes, a so few, the great tragedy of life is going back to that which we have already conquered.”

In his closing remarks, Pastor Mills encouraged everyone to feed their minds with the Spirit, with Michael Anthony’s Hmmm… Food for Thought. “When you feed your mind, you are arming it to be victorious in life’s battles; for the battles we face are won or lost, upstairs.”

In speaking with the gathering, made up of family, friends and well-wishers, Mr. Anthony explained that most of the work on this first book was done during October 2015 to December 2016. “As my wife Monica was completing her Master of Science Degree in the Administration of Justice and Security, which she finally achieved in December 2016, her average bedtime was 2 – 3 am. Therefore, I decided to make use of the late hours keeping her company and complete my long-term projects. Staying up with her caused me to submit my first draft of this book for editing in January 2017.”

Hmmm… Food for Thought focuses on a human’s experience on his journey back to God. “In spite of the fact that I am the author of the book, I am so inspired with the book. I too use it all the time as my devotional guide and it blesses me each time at another level over,” Michael said.

Mr. Anthony explained that writing this book was like second nature, enhanced with moments of inspiration and reflection. “My greatest download of inspiration came while writing ‘The Bottle Neck’ and ‘I Love the Lord’. They were both written in November 2016 and were bases on experiences here on Tortola. “Each of them took no more than fifteen minutes to complete because when you are in that zone you cannot let the moment pass, you have to get it out and get it down,” he explained.

Mr. Anthony admitted that the hardest part of writing the book was adding the declaration at the end of each devotionals which was done after all the devotionals were written.  “This was a laborious task because you do not want to repeat the declarations and they had to be relevant to the subject matter.  One of the interesting things I learned after writing this book is that there are no restrictions to the naming of a book. Many books can have the same name, what is restricted is the content. There are other books with the name Hmmm… Food for Thought, but they are recipe books, so my version does not threaten any copyright infringement.”

What surprised Mr. Anthony most was the quick acceptance and overwhelming support of his first book. He said, “I did not realise that so many people held my ministry in that level of regard and it is quite heart-warming. Over 90% of the persons who heard of the book said if Michael Anthony wrote it I must get a copy.”

Mr. Anthony expressed his happiness of God’s help and guidance in producing a tool which is a great method of outreach. The e-book version, especially, is being pushed to students overseas which offers the convenience of having this book portable with them. The Kindle e-book version is available on Amazon and the I-book will available in June in the Apple Store.

The book is non-denominational because it is intended to reach souls for Christ. “My hope and prayer is that this book will bring a light of hope to the community no matter your station in life,” he said.

Hmmm… Food for Thought is the first of several works to come.  Other publications that Mr. Anthony would like to pursue are a book of poems; his experience as a District Superintendent; and how to turn your trials into stepping stones; all of which the Lord inspired him to go with initially.

Mr. Anthony’s formal training is in Digital Electronics Robotics and he is a qualify software engineer. After obtaining such accolades in the late 80’s, he got a good job in the US and was making a base salary of $40,000 a year, but his parents were getting old, so he decided to move home. He taught Computer Study at HLSCC at nights which he found was a great way to meet with many young people and to assimilate back into society. He suffered a huge pay cut with that decision, but the value of adding quality to his parent’s life far outweighed any amount of money or career. In 2004, Mr. Anthony started in ministry and in 2011 he was installed as the Superintendent of the Eastern Caribbean Circuit.

“The benefits of moving home are invaluable. To work with my parents for the last 20 years of their lives; to secure and improve the family business; being around my siblings, nieces and nephews; meeting and marrying my life partner and of course meeting the Lord personally, was all worth it,” He said with all certainty.

In 2015, Mr. & Mrs Michael Anthony established a Dona Advise Fund for Charitable Giving. The fund is managed by Water Stone Inc. who distributes the donations to entities that are US 501C3 approved charities. As a result, they will be donating 50% of all the book sales to our Dona Advise Fund. “This is something that helps to honour the virtues instilled in us by our parents,” Mr. Anthony ended.

In closing, Mr. Anthony admonishes aspiring writers to just start. “You must always have a note pad or an electronic device to capture those thoughts, for they will not come back to you later on.”

Previous Article
THE PINEAPPLE
Next Article
Meet Model: Michael Heverly, the man with the golden mane