VI Companies Pick Up the Pieces in Style

Since the beginnings of the tourist industry in the British Virgin Islands, a handful of signature firms have been whisking would-be sailors away to enjoy painkillers, dive the reefs, stick their toes in the white sand and share with guests the natural beauty of the BVI–both secret and not-so secret. Now, they face their biggest challenge yet–picking up the pieces from Hurricane Irma in time to welcome guests for the 2017-18 season. Here’s a snapshot of the recovery.

In a territory with almost as many charter boats as people, The Moorings is nearly synonymous with the British Virgin Islands, having begun in Road Town in 1969.

General Manager, Josie Tucci, said that having their own boatyard was one of the things that allowed them enough time to recover from Hurricane Irma in time to open December 9. For their guests, it wasn’t a moment too soon.

“Right away, guests began calling about the itinerary,” she told VI Life & Style. “They asked, what’s open? Which beach bars, which resorts, which anchorages? We are relying on local web sites for news, and we’ve sent out skippers. Our team in the BVI has been working around the clock. Every day, we hear more good news about things that are opening.”

She said The Moorings team has been in touch with popular attractions like Foxy’s and Hendo’s on Jost van Dyke, Leverick Bay Resort & Marina on Virgin Gorda, and Pirates Bight on Norman Island, all of whom are open and ready for the season.

“On starting day, we’ll have 200 guests,” she said. “By Christmas, we’ll have 100 boats ready, and 130 in total.” Because of the hurricane they’ve doubled their order for new yachts.

Will it be business as usual? Not quite. “Most of our guests are longtime visitors to the BVI and are big advocates for the territory. We know it will be emotional for them to come back,” said Ms. Tucci. “The taxi ride to the base may be shocking. However, we know that most of our guests are tuned into the situation here. They are positive but realistic.”

In the meantime, as they prepare for the season, The Moorings has helped guests engage by using the hashtag #CaribbeanComeback, encouraging fans of the BVI to the post photos and memories of the great times they shared over the years.

“Everybody is trying to take the good from this situation,” said Ms. Tucci. The staff has also been busy fundraising, having put on a massive event at the St. Pete Yacht Club in Florida. In just three months, their site on YouCaring has raised over $100,000 to help their employees recover. We’ve had some great support from the government.”

Looking toward the future, Ms. Tucci said the company hopes to bring the fleet back up to pre-Irma levels within two years. With almost 50 years of sailing under their belt, The Moorings isn’t going away anytime soon.

MarineMax Vacations, which operates the newest fleet of powerboats in the British Virgin Islands, spared no expense in their rapid recovery from the hurricane. In time for their opening December 1, they rolled out the MarineMax 362, a customized Aquila 36 power catamaran model, as an addition to their charter fleet.

“Her sportiness and conveniences combine to create incredible days out on the waters of the British Virgin Islands,” said President Dave Bigge.

Mr. Bigge said they are also partnering this season with Scrub Island R 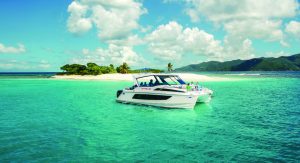 esort, Spa & Marina, an Autograph Collection Hotel, to serve as their home base in the BVI, which means guests will get an exclusive resort experience prior to their trip.

“This well-known destination is another component of our commitment to providing excellent vacation experiences in the islands with an award-winning private island retreat,” he said.

On top of these new initiatives, the company has also pledged to donate 10 percent of all charter booking fees from this season to hurricane recovery, in an effort to help residents rebuild their homes and livelihoods.

“The British Virgin Islands are, and always will be, paradise and home to some of the world’s premier travel destinations,” said Raul Bermudez, MarineMax Vacations Vice President. “Favorite island watering holes are undergoing restoration as the island shores are preparing to welcome guests this season overflowing with island vibes and cold beverages that the BVI is known for.”

Mr. Bigge acknowledged that there is still a lot of work ahead to help the territory recover and be able to welcome charter guests at the same levels it once did, and they are committed to playing a vital role.

“Donating 10 percent of new reservations…feels like the right step to support the rejuvenation and economy of the British Virgin Islands and those that live there,” said Mr. Bigge. “We are all united by water, and the dedicated support of our team, the islands and our guests is an extension of the MarineMax family and boating passion.” 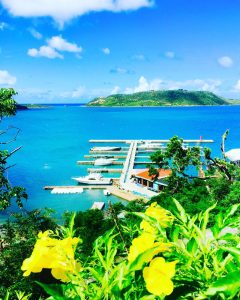 Meanwhile, on Virgin Gorda, Leverick Bay Resort & Marina owners Nick and Monica Willis rushed to open up by October 9, opening up the Cove Restaurant, the Chef’s Pantry, and the spa, in plenty of time to cater to yacht brokers for the annual BVI Charter Yacht Show, where they impressed them with the elegant tables and green surroundings. “You’d never know a hurricane had recently passed,” said one broker.

Restaurant manager Rebecca Lewis added, “We had all employees (wait staff, dishwashers, cooks, maids, office staff, etc) working the day after Hurricane Irma hit Virgin Gorda. It was a wonderful team effort made by all.”

Given that the resort is the only port on the North Sound, making a good impression was vital, ensuring that many of the brokers will return home to recommend the BVI to their clients.

Meanwhile, for fans of the legendary Michael Beans Pirate Show at Jumbies Beach Bar (also known as Happy ‘Arrr,’) never fear. The masts on the pirate’s boat were snapped off during Irma, but he is preparing to bring his rum-fueled antics back to delight guests for his inaugural show of the season in December. The marina is also welcoming vessels, said Ms. Lewis.

“There is progress seen daily and we are now greeting upwards of six to seven boats a day.”

3 Organisations that are Leading the Charge on Hurricane Recovery in the BVI
LifeStyle May 30, 2018