Faced with mountains of debris and oceans of money, many BVI residents didn’t know where to start to rebuild after the devastation of Hurricane Irma. But to get the ball rolling, sometimes all it takes is finding a way to help a friend or a neighbour in need. We talked to three organisations that are leading the charge. 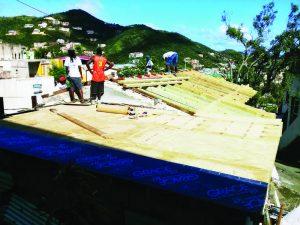 Adopt a Roof
Regis Bourdon, chef and owner of Brandywine Estate Restaurant, whose own business was partially destroyed by Hurricane Irma, remembers the exact moment when he got the idea for Adopt a Roof. A young woman he knew standing outside the BVI Red Cross. “She went to the Red Cross to get a tarpaulin for her grandmother, but she was too late.” Mr. Bourdon knew he had to help. He called up a builder in East End, who donated labour and materials. Together, they have completely rebuilt two people’s roofs in East End and have solicited millions more donations from abroad. Rebuilding an entire roof is not easy or cheap, but donors can adopt an entire roof or simply pay what they can. Mr. Bourdon, who recently opened up another temporary restaurant while his original one is repaired, said having a roof on a house changes a person’s whole demeanour. “You pass them on the street and you know, they’re different people, they walk straight and they smile and their life is back.” 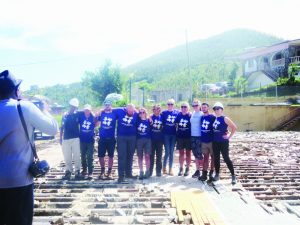 All Hands and Hearts
Schools across the BVI are being rebuilt from the ground up with the help of a U.S. tech entrepreneur and a supermodel. All Hands was the brainchild of entrepreneur David Campbell, who survived the 2004 Asian tsunami. This year, he teamed up with Happy Hearts, an organisation dreamed up by supermodel Petra Nemcova, to form All Hands and Hearts. Volunteers from as far away as Australia and South America arrived in the BVI in January, pitching tents in Nanny Cay and, every day, travelling to schools like Joyce Samuel Primary in Belle Vue and Elmore Stoutt High School in Road Town.

Volunteers have pitched tents in Nanny Cay, and are spending entire days clearing out debris, pulling out shattered windows and tearing up mouldy floorboards so that the government can have “a blank slate” to rebuild, explained Ms. Wood.

With help from a $2.5 million grant from Norwegian Cruise Lines, All Hands and Hearts plans to be in the territory for potentially years to come, and will soon start bringing in skilled workers to train local students from H. Lavity Stoutt Community College, so that they continue on the much-needed work to rebuild their home. “We’ll stay as long as we’re needed,” said Ms. Wood. 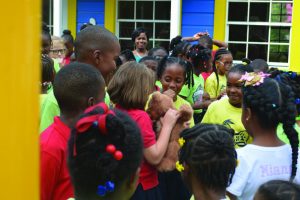 Travelling Teddy
From on top of a surfboard on the north side of Tortola, to a Hobie cat in Oil Nut Bay, to a newly reopened coffee shop in Road Town, a cuddly teddy bear is documenting every aspect of rebuilding in the BVI through his Facebook page. He’s a pet project of Carol Arneborg, a native of West End who now lives in the United Kingdom, who thought a stuffed bear would be an ideal character to provide healing and companionship after a disaster. “Travelling Teddy was designed for children, but adults seem to love him, too,” said Ms. Arneborg. “He shows the recovery in a positive way.” From Jost Van Dyke School to the temporary school set up in West End, and everywhere in between, Travelling Teddy has given hugs to children, listened to their stories and shared them with the world. In addition, children have cut out and coloured Little Teddies to send to schools abroad, getting messages of support and goodwill in return from as far away as Greece, France and the U.K. “Everybody needs a bear hug once in a while,” said Ms. Arneborg.

VI Companies Pick Up the Pieces in Style
Elton Callwood May 18, 2018

VI Companies Pick Up the Pieces in Style