Alzheimer’s Dementia is a devastating disease and when you know someone who is affected by this disease you either ignore the situation or become a staunch advocate. In 2012 when Edna Williams noticed a change in her fellow Rotarian’s behaviour, she immediately sensed that something was wrong. As soon as her friend told her that he had Alzheimer’s, she responded, “I know.” Soon after she noted that he was not attending meetings. “He was no longer driving. So I would pick him up from his place of business and bring him to the meetings because I knew his passion for Rotary,” she said.

What began as a favour for a friend has turned into a community-wide, non-profit awareness organization: VI Alzheimer’s Association.

It did not happen so easily. In 2013, Edna began attending Alzheimer’s Disease International English Speaking Caribbean Conferences. Upon return, meetings with relevant public sector officials were of no success. It became clear that the issue of Alzheimer’s and other dementias had to be approached from a different perspective. The Alzheimer’s Awareness Campaign began. Articles on aspects of Alzheimer’s were sponsored by various companies as full-page adverts in one of the local paper. Friends and other Rotarians began to express an interest in the Awareness Campaign. In 2015, the Rotary Club of Road Town took up the mantle and the President at that time, Ryan Geluk, made it an objective for his presidential year.

A meeting was held with the President of the Lions Club of Tortola, Carvin Malone, and that year the Alzheimer’s Awareness Advocates was formed. Over the next year, the Advocates developed a comprehensive strategic plan with a vision for a dementia-friendly BVI community. The group made appearances on local radio and television programmes, conducted awareness walks, and vigils in honour and remembrance of persons living with dementia. “We educated ourselves about Alzheimer’s and other dementias. At every meeting, there was a learning moment,” recalled Edna. The Alzheimer’s Disease International of the UK (ADI) website and conferences became critical learning platforms. ADI is the international Federation of over one hundred national Alzheimer’s Association members.

VIAA maintained a strong relationship with ADI and in June 2016 two members attended ADI’s Membership Development Programme in the UK. The focus was to be guided in developing a strong Association. Of course, like any movement, the Alzheimer’s Awareness Advocates saw their future as a Non-Profit Organization and in August 2016 the Virgin Islands Alzheimer’s Association came into existence. We were mentored for two years by ADI. 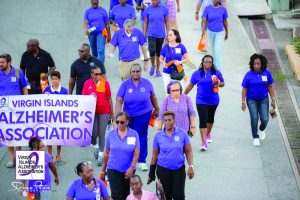 In adherence to ADI’s Strategic Plan, VIAA participated annually in World Alzheimer’s Month (September) activities with a vigil and walk. It soon became clear to VIAA that it needed to focus on prevention if it was to make any impact in the growing numbers of dementia cases presenting in the Virgin Islands. So, brain health and lifestyle changes became an additional central focus of its awareness programme.

In April 2019, VIAA was invited to apply for full membership in Alzheimer’s Disease International (UK). “The Executive Council approved our application and on 19 June 2019, we became ADI’s National Association of the Virgin Islands,” Edna Williams said with pride.

The association’s next step is to keep collaborating with ADI and grow within it, eventually twinning with a more established association; providing training for family caretakers, educating health professionals and creating awareness of Alzheimer’s and other dementia to the community at large.

“We have to thank the community because many companies and individuals have joined the movement. We started as one, now we are over forty providing awareness and advocating for the rights of persons living with Alzheimer’s and other dementias,” commented Ms. Williams.

Reducing your risk for dementia means a change in your lifestyle. “What’s good for your heart is good for your brain. Move, be physically active; change your diet- eat more fruits and vegetables; challenge your brains; learn a language or how to play a musical instrument; get 7 to 8 hours sleep; decrease your stress level; stop smoking and decrease your alcohol consumption.”

“One of the things we need to do is to assist in the development of a national policy which would address the treatment and human rights of persons living with dementia,” said Ms. Williams. “That is basically a mandate of Alzheimer’s Disease International and World Health Organization.”

The Association is moving forward with its strategic objectives. In September, it will launch the “You Are Not Alone” programme, which aims to support family caregivers. It also currently runs a youth support group for children or grandchildren of those affected by the disease. Eventually, the association will host trainings for large organizations to assist them in becoming dementia-friendly.