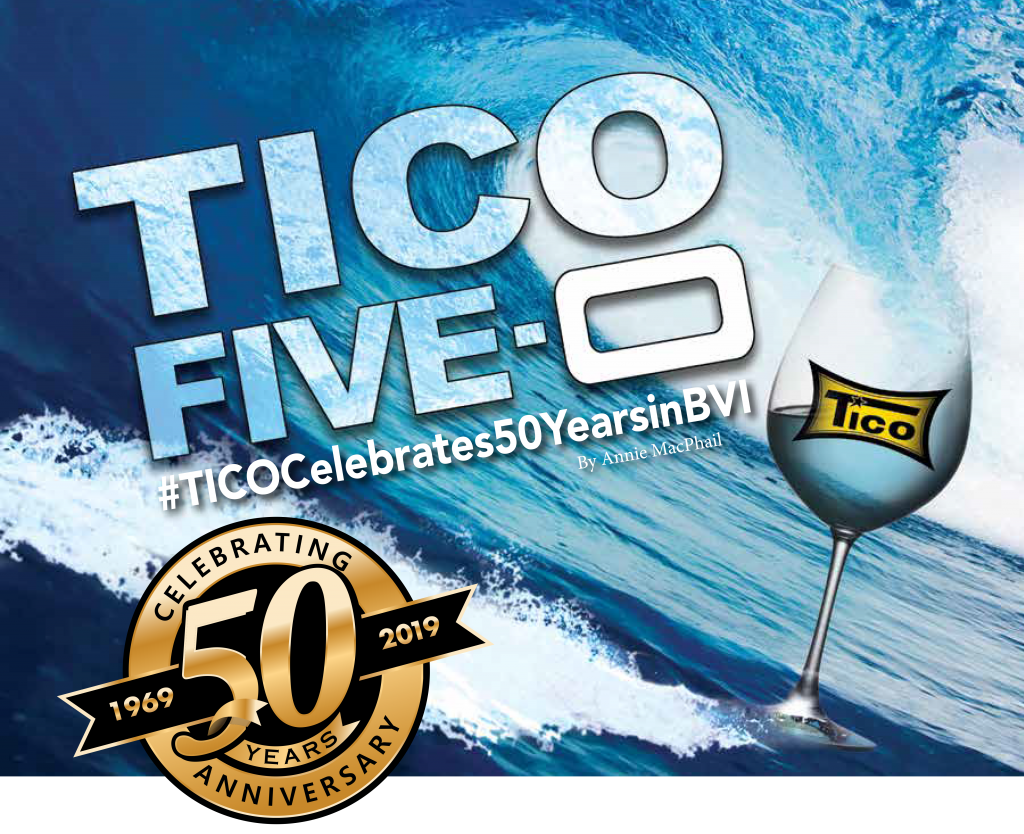 The tale of TICO is 50 years long this year, and going strong. It is an extraordinary legacy that has touched the lives of many individuals and families in the BVI. So, what better time to share the story that began in 1969 with John and Ginny Morrell and their sons Andrew and Adam.

TICO (the acronym for Tortola Importing COmpany), is synonymous with many world-renowned beverage brands in the British Virgin Islands. John Morrell opened the doors of TICO in 1969. Having graduated from Yale in the U.S., John relocated to London to join the family business, Wolfshmidt Vodka. For twelve years, John lived in London where married Ginny in 1963, started their family and made a life together in their family home. The late 60s was a period of baby boomers and the beat generation; a time when people began to question the society in which they lived and “stepped out of it”. For John and Ginny, leaving London during that time was a timely move, choosing to seek out a new life far afield in the Caribbean. After visiting islands such as the Caymans and St. Maarten, Ginny chose the British Virgin Islands. The attraction was obvious. It was a stable place to raise a family. There was access to travel by air from St. Thomas to Newark, New Jersey, close to Ginny’s family home and the place their boys were born. The BVI also had a US dollar-based economy. The Islands were beautiful and the BV Islanders warm and welcoming. 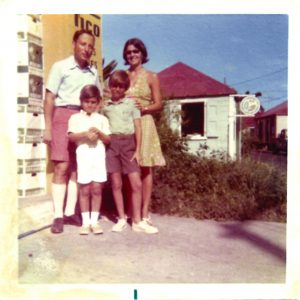 In August 1969, John arrived with his son Andrew, age five and with the STONE’S Ginger Wine agency already secured back in London, he was poised to start Tortola Importing COmpany. The rest of the family followed: Ginny and their youngest son Adam, age three. Ginny’s grandmother, Mrs. Grace Ward Armstrong (Daughter of Samuel A. Ward, musical composer of “Materna” O Mother Dear, Jerusalem) and Beaudry their beloved family dog, arrived in Tortola later on via the Chocolate Queen, the ferry that travelled from St. Thomas to Tortola at that time.

John purchased a piece of land from Mr. Blyden of Round Hill to build their new home. While Captain Hodge was building their new home, they rented a house on Soldiers Hill amongst welcoming neighbours such as Mr. and Mrs. Lloyd and their Round Hill neighbours, Natty Farrington and family, the Rhymers, and the Robinsons. Adam recalls the wafting aroma of Mrs. Lloyd’s homemade bread baking in her outside oven on Soldiers Hill, and of Mr. Robinson, always dressed in a jacket and hat and who was truly gentle.

Prior to moving to the BVI, John secured a location to start his business on Main Street, where life was bustling and businesses flourished. The first TICO shop was located near the corner of Flemming Street, opposite Road Town Wholesale, and next door to Mr. Martin, the Antiguan butcher. Adam fondly remembers the colourful life on Main Street in the early 1970s as a young boy. Mrs. Danny’s Bar and May, her assistant, on the corner and the library next to the butcher are just a few of the memories. He recalls the nearest telephone that serviced the area was by Radio Doctor. When a call came in for TICO, the reverberation down the street was: “Mr. TICO…. Mr. TICO….Mr. TICO…telephone!” and his father would scurry up the road to take the call. 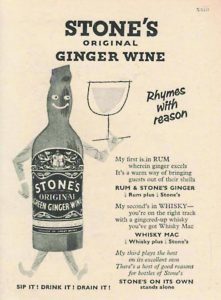 Ginny started a shop called Turtle Dove, seeking out and selling locally made crafts, baskets and home goods. Together, John and Ginny grew their businesses while the boys went to school. Up and down the hills they would ride in their Land Rovers, Ginny’s being a short canvas top and John’s with a long bed hardtop with the TICO logo on each door.

Rides were offered to all, most notably, on a daily basis to numerous school children from Soldiers Hill, Meyers and Harrigan’s down to the cemetery at the bottom of Joe’s Hill. The family became affectionately known as “Mr. TICO”, “Mrs. TICO” and the boys as “TICO Boys” with the older generation referring to them as “Daddy and Mammy TICO”.

The Rhymer family were neighbours when the Morrells moved into their newly built home at Round Hill. Allan Rhymer was an original employee of TICO in 1970. Brother, Dennis Rhymer worked at Caneel Bay (as did many others living on Tortola) and joined TICO in 1972. Dennis worked at TICO as Mr. TICO’s right hand, writing up invoices, making deliveries, clearing cargo, doing paperwork, banking and even driving the boys to school when Felix Norman, a long time TICO employee was pre-occupied. He laughs when thinking about how he stole Esther Crabbe Potter from Chase Bank to become employed at TICO. Dennis retired in 2012 and Esther is still at TICO today.

Mr. Jean Lloyd (AKA DJ Lloyd or now – DJ Love) worked for HM Customs during the 1970s. The port was located at what is now the Road Town Ferry Terminal. Cargo would arrive by tender and there were times pallets for TICO simply could not fit into the small warehouse at the port. Thus, they were left outside under a tarp. Mr. Lloyd remembers assuring Mr. TICO, “Don’t fret, all will be safe!” Sure enough, when TICO went to collect their shipments, all was safe. 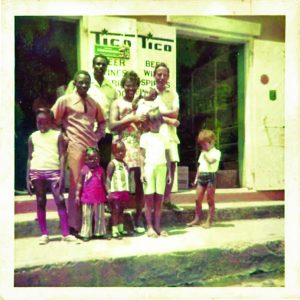 TICO took the opportunity to relocate across the street into the newly vacant premises, from the original location, where a long-lasting and fond relationship was forged with Mr. Audley Maduro, who worked for a Bermudian firm upstairs. Audley became a director of TICO from the early years, up until 1995 when Adam joined the company and Audley retired from TICO. Audley offered much inspiration throughout the decades as TICO grew.

In the 1980s, TICO was on the move again, this time around the corner on Flemming Street in the building below Virgin Queen. Turtle Dove and TICO continued to grow. More agencies were secured such as Tanqueray, Johnnie Walker Black, Malibu, and ABSOLUT for example. With space limited on Flemming Street, TICO purchased land and built a new facility that today still sits prominently at the entrance to Wickham’s Cay 2.

Moving to Wickham’s Cay 2 was seen as moving out of town, but was quickly seen as a smart move as Road Town was expanding outward at a rapid pace. For over twenty years, this was TICO’s headquarters; housing their offices, warehousing their imports and showcasing their brands in the retail shop.

After graduating from university, Adam spent one year working for TICO in the warehouse. He went on to study in London at the Wine & Spirit Education Trust then did apprenticeships with Allied Domecq in London, Harveys Bristol Creme in Spain and Cockburn’s Port in Portugal. He moved to New York City and continued working in the trade with a prominent wine merchant on Madison Ave., Sherry-Lehmann. In 1994, Adam returned to the BVI to join TICO. His father was thrilled. TICO continued to move forward acquiring even more agencies such as RedBull, Ting, Kahlua, and Goslings.

TICO expanded to the present location at Pasea Estate, building new offices, a second retail shop and a large warehouse. Both TICO locations withstood the storms of 2017. The modern warehouse facilities at Pasea Estate include the BVI’s largest subterranean temperature-controlled wine room. 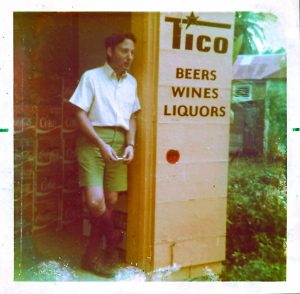 With over 40 employees and 50 years trading in the BVI, TICO is an integral part of the British Virgin Islands’ community. In January 2019 “Mr. TICO” – John Morrell passed. During his lifetime, he was able to see TICO into the 50th year. He was thrilled that TICO’s success and commitment to the future and to the community continues to grow and move forward with Adam at the helm as Managing Director.

During John’s memorial service, Audley Maduro wrote and spoke about John, “Early on, John also set the standard by which TICO would demonstrate its corporate responsibility to the BVI community as he supported a wide spectrum of organizations across the BVI.”

An essential component of TICO’s work ethics and business structure is the drive to integrate community service into many aspects of TICO. Post Irma, TICO reached out aiding many municipal agencies, providing beverage support as well as distributing generators (on behalf of DIAGEO and Heineken) to all fire departments and others. Adam kept his vehicle stocked with beverages so that he could offer them to utility workers in the field.

TICO frequently has wine tastings, donations from which are given to many of the community’s non-profit organisations such as the Family Support Network, the Adina Donovan Home and the Rainbow Home. In addition, TICO’s brand building and promotional efforts are international thereby promoting the BVI to the outside world. STONE’s Ginger Wine is also in its 50th year in the BVI. TICO hosts the STONE’s Dominoes Tournament that provides friendly competition and helps create additional revenue for the local businesses that host the matches.

To celebrate the 50 years collaboration, TICO is working to expand the event internationally and has been featured on TEMPO Networks, whose network spans the pan-Caribbean region.

Managing Director, Adam Morrell said, “It’s remarkable that STONE’s Ginger Wine was our first distributorship in 1969 and it’s still growing. It’s in a class by itself, as is TICO and the British Virgin Islands!”

To continue the 50th-anniversary celebrations, TICO will be hosting their official TICO EXPO in November 2019, including a half-day expo on Virgin Gorda, November 6th and at Maria’s by the Sea on the 7th. The Expo mingles suppliers with the local business and will be open to the general public on the night of the 7th as another fundraising effort. Suppliers will enjoy a half-day exploring the British Virgin Islands with a tour. Keep a sharp lookout for TICO’s biggest fundraiser yet…Old School Calypso Style!

TICO is the first major BVI distributor to take responsibility for imports and their effects on the environment. They are proud to be a leader in the recycling efforts in the BVI having a convenient recycling programme – offering a location for their customers to return their glass and cans.

In addition, glass, cans and plastics are collected from their warehouse in collaboration with their green partner, Julie Swartz of Green and Clean VI.

FantasTICO Future to the BVI and All…

TICO strives to be a household name in the BVI, is always on the ‘cutting edge’ of the beverage industry, and is committed to providing the finest quality beverages to the market it serves. TICO looks forward to many more years serving the BVI community and sincerely thanks the community for 50 years of continued support!

Previous Article
What Is Breadfruit?
Next Article
Art Scene: Matt Clark – Everything Happens for a Reason