Art Scene: Matt Clark – Everything Happens for a Reason

One of the newest artists on the scene in the BVI and represented in the Images Gallery at Nutmeg & Co. on Waterfront Drive is Matt Clark. Landscapes painted on exotic bird feathers, large acrylic and ink paintings on paper, and a scaled model of a cargo-filled Tortola Sloop (including functional rigging!) are just a few of the diverse pieces of Matt’s artworks which are as detailed and fascinating as his background.

The public’s reaction to his wide range of mastered media has been astounding and it is no wonder when you learn of his life experiences and the people who have influenced him along the way. From his parents and sisters, to his art teacher in high school in Alabama where he spent his formative years, to his partner Lisa Gray, he has taken each person’s advice and encouragement to heart and kept it close to him.

As a young man, Mat decided to enlist in the U.S. Military in 1985. Post-Basic Training, he went on to serve as a Technical Drafting Specialist (Architectural and Civil Engineer) with the U.S. Army Reserves; a choice which was influenced by his high school background in technical drawing and art.

After serving three years, “cabin fever” began to set in and Matt felt the need for a change.  It was then that he re-enlisted in the U.S. Army as a Blackhawk Helicopter Repair personnel. In his combined twelve years of Military service, he served in the Persian Gulf War/ Desert Storm and Somalia (upon which the film the “Black Hawk Down” was based).

After transitioning into civilian life and having accrued vast experience on helicopters in combat, Matt was employed by the U.S. State Department with the “War on Drugs Program” (Bureau of International Narcotics and Law Enforcement) and once again, found himself in a combat situation, this time in the jungles of Colombia. 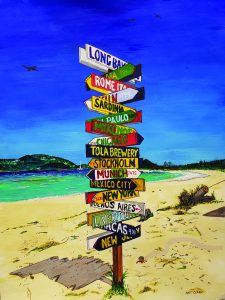 After thirty years of traveling and working around the world in his field, Matt found himself on Tortola, transitioning from St. Croix, shortly after Hurricanes Irma and Maria.

Throughout his life, Matt’s family encouraged him to get back into art and painting but the helicopter industry kept him too busy, until last year that is. In the back of his mind, he always had a dream to one day have his art hanging in a gallery.

“‘CAT 7, Smugglers Cove’ was inspired by a photograph that I had taken on our first trip to the beach after the hurricanes; a much needed day of sun and relaxation.  When we arrived at Smuggler’s Cove, we sadly saw that no trees existed except for one palm tree.  However, upon arriving, we easily noticed the newly erected directional sign that was next to Nigel’s bar.  I snapped a photo of the scene because of its colourfulness.  Later I decided to paint this scene,” says Matt.

“I decided I was going to find out who had made the sign and why.  After seeing another similar directional sign at Long Bay Beach on Beef Island a few months later, I did some research and was able to determine that someone associated with TOLA Beverage Co. was responsible for building both of them and placing them at the beaches.  From what I learned, this signage project was all due to the frustration of waiting for home building supplies after the storms, and the delayed opening of a new business.  Mr. Michael Kyne, of TOLA Beverage Co. wanted to bring some life and colour back to the beaches. Little did he know at the time how inspirating his work would become to so many others, especially me, who decided to paint a long awaited painting of such a peaceful, quiet and tranquil place.”

Matt’s painting of the sign at Smuggler’s also shows the storminess of that day and is suitably entitled “CAT 7”, which reminds us of that fateful time in 2017 during which so many suffered.  Mr. Kyne’s work inspired Matt to paint a second painting titled ‘Blue Skies – Long Bay, East End’.  Matt is not only grateful to those who kept up the encouragement to paint but to Mr. Kyne who willingly shared his story. 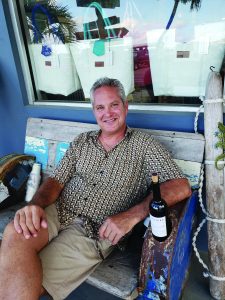 A true artist is one who can take what he sees in his mind’s eye and turn it into tangible reality. Matt Clark is exceptional at doing just that. His original works and prints are available at Images Gallery at Nutmeg & Co on Waterfront Drive in Road Town.