“Collaboration versus Competition: Because you need a business bestie,” was the theme surrounding a networking event for women in the British Virgin Islands.

CaribbeanPOSH magazine, a lifestyle brand dedicated to being a platform for Caribbean talent, held its fourth annual POSH Girl Power Brunch. This year, the brunch was extended from a one-day event into a weekend-long celebration of the empowerment of Caribbean women.

To kick it off, POSH hosted a Cocktail Welcome Party at the Coconut Lounge in Pier Park. The night featured a live acoustic performance by singer and media personality, and the 2019 Caribbean POSHgirl POWER Brunch host, Naomi Cowan.

Saturday was the main day, where women journeyed to Scrub Island for the power brunch. 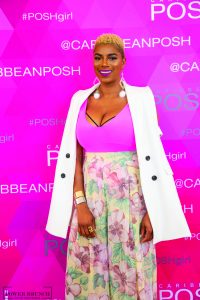 Another new feature this year was breakout sessions which allowed attendees to learn and grow with specific content relevant to them. Some topics included mastering executive communication, succession planning, and brand clarity. The day included a beauty bar where ladies learned different tips on how to do their makeup and a small fashion segment where designers showcased their products.

The ladies spent Sunday relaxing in Long Bay East End during the Soca Beach Brunch and Day Party where there were a few speaking guests. They held an honest discussion about money and power, as well as building brands. Chefs Jabari Stoutt of Tropical Fusion and Gorvey Henry of Gorvey Henry Cakes provided eats during the event.

“We really tried to hone in on the importance of us as Caribbean women working together,” said Caribbean POSH magazine founder Janette Brin. “It’s something we perhaps take for granted.”

She explained that the event highlighted the importance of combining talent to make something great. Sometimes people are afraid of failure or think that someone else’s ideas might be better, but if they are able to be brave enough to share their thoughts and talents, they may find that they’re the missing piece needed to go even further.

Janette came up with the theme after looking around and seeing a common issue with people, especially here in the Caribbean. She said many people tend to be entrepreneurial and a lot want to start their own businesses. But, we all go through some level of struggle, and we could find more success if we worked on how to work together.

The idea is to bring Caribbean women together. Originally a print magazine to celebrate Caribbean talent, Caribbean POSH began in 2005. Janette always wanted to do something entrepreneurial that would benefit herself and others. She often felt that coming from a small Caribbean island, her voice seemed small. Her intention with the magazine was to provide a platform to unite Caribbean voices. It blossomed from her sense of pride in being a Caribbean woman. Janette eventually tied in the POSH event with the magazine, creating an event that draws in nearly 200 women from all over the Caribbean. POSH itself is for the Caribbean as a whole, including the diaspora.

As for the future of the event, Janette said Caribbean POSH will continue to host a three-day conference and that she likes the current format which includes keynotes and breakout sessions. She’d like to add more content around business law and how women could do business better. Open to suggestions, Janette always encourages people to reach out to her and give her their thoughts on what they’d like to see or hear more of.

Previous Article
Be Disciplined!
Next Article
Celebrating the BVI’s Diversity