Peter Island – Through the Years.

Of all the emerald isles that constitute the British Virgins, Peter Island stands out as one of the brightest gems in the group. It has been blessed with wondrous beaches, protected coves, unsurpassed coral reefs, and an interesting topography for hiking and exploring; and except for its famous five-star resort, it is almost uninhabited. Not only that but Peter Island’s history is speckled with eye-opening stories, legends, and interesting characters ranging from the aristocracy to the simplest, God-fearing people. 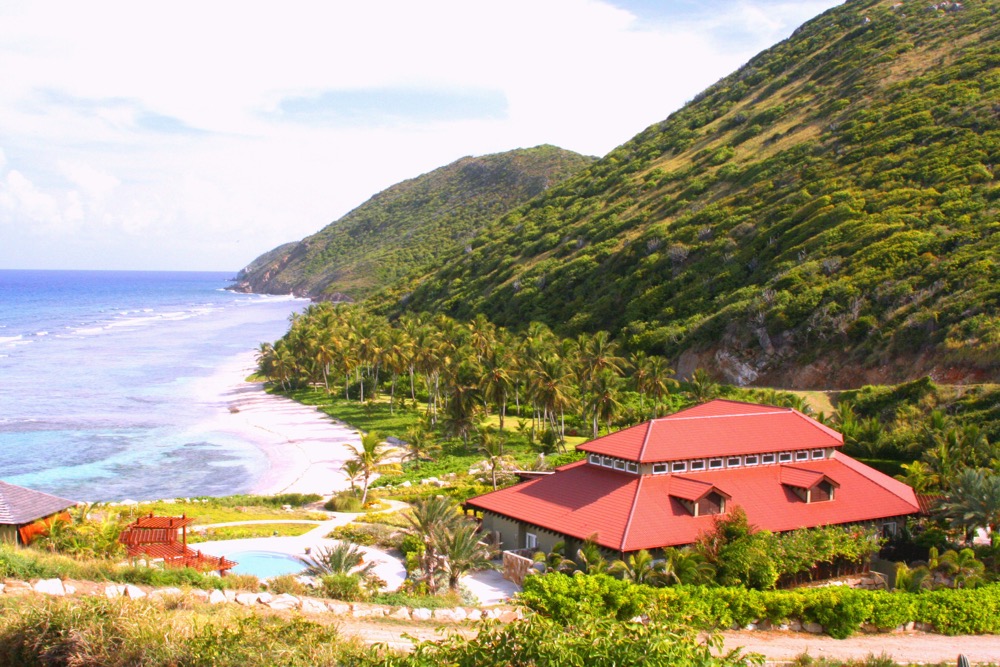 Peter Island was named for Pieter Adriensen, brother of Abraham Adriensen, “Patron of Tortola.” In the early 1600s, the Dutch laid claim to the BVI through the Dutch West India Company. With the help of a Dutch privateer, Joost van Dyke, Abriensen built a fort and established a small settlement on the narrow isthmus between Sprat Bay and Great Harbor. Later, in 1696, a German company from Brandenburg aspired to build a slave-trading station here but was denied permission by the Leeward Islands’ governor.

By the mid-1700s some planters from Tortola had modest success at growing cotton on Peter Island, the soil being unsuitable for sugar cane. The latter half of the 18th century was the apex of the plantocracy era. Captain Thomas Southey, a prolific writer, and historian visited Peter Island and in 1806 he wrote a vivid description of a Peter Island planter and his smallholding: “… a kind of Robinson Crusoe Spot, where a man ought to be a farmer, doctor, carpenter, fisherman, planter, everything himself. The owner’s house has only the ground floor, a roof of shingles projects six or eight feet beyond the sides, like a Quakers hat: not a pane of glass in the house, only shutters for the apertures. In the centre of the drawing-room or hall, or best room, were tied up ears of Indian corn, on a chair lay a fishing net; in one corner hung another, a spyglass, a fowling-piece, chairs, looking glass, and pictures of the four seasons composed the furniture; the library consisted of a prayer book, the world Almanac, and one volume of the Naval Chronicle. On the left hand was a room, with a range of machines for extracting the seeds from the cotton. Round the house was an abundance of goats, turkeys, fowls, a bull, cow, pigs, dogs, and cat…

“The old gentlemen were dressed in a large wide-brimmed white hat, which appeared to have been in use for half a century; a white night-cap covered his bald head; his blue jacket had lapels buttoned back; his duck waistcoat had flaps down to his knees; the trousers were of the same material as the waistcoat…the man leading this isolated life, with only his old wife, who looked more like an Egyptian mummy then anything human, was worth 60,000 pounds, he had lived twenty years on that small island and twenty upon Tortola.” (sic)

Soon slavery became a thing of the past, the slave trade was abolished by the British in 1807 and complete emancipation came in 1834. Peter Island’s fragile cotton industry failed and local families returned to a simple life of subsistence farming and fishing. Methodist religion became prominent at this time with ministers journeying to the island on a regular basis – according to a census taken in 1853 there were 153 persons living on Peter Island. By 1920 the number had declined to 40.

A severe hurricane in 1916 destroyed almost everything on Peter Island and this may have given rise to the introduction of tobacco as a crop worth trying. It was a crop that achieved modest success when a British diplomat, John Charles Brudenell-Bruce arrived in the BVI in the 1930s and acquired a substantial property (230 acres) at Peter Island’s Little Harbour. Bruce was a “Peer of the Realm” and became a pioneer legislator in the first Legislative Council in the BVI. He served for six years from 1950 to 1957.

One of Bruce’s children, Diana Bruce, owner of Little Denmark in Road Town explained that her father had had a lung disorder and was advised by his doctors to search for a warmer climate. He fell in love with Little Harbor and built a fine house on the point. Then he established a small tobacco plantation and manufactured cigars and cigarettes for export. The family had an island sloop named Blue Peter and Diana remembers having to hand-crank the one-lung diesel when the wind was from the south, and on their way back from Road Town, they couldn’t fetch the bay. Little Harbour was left vacant when the Bruce family moved to Tortola and later Percy Chubb, a retired insurance tycoon, bought the property after a time as a cruising yachtsman. He wrote a compilation of journals, and penned one of the first cruising guide books of the Eastern Caribbean.

During these middle decades of the 1900s there was a small community of fishermen and their families living at Sprat Bay. These Virgin Islanders had built up a substantial fishing business and with subsistence farming of livestock and produce managed to live fulfilling lives. Known as the Southern Cays, the islands of Cooper, Salt and Peter all had small but thriving communities. In a charming recently-published book, The Way We Were, author Andria Flax describes times during summer holidays when she spent happy days with relatives fondly known as the “Cay people.”

Ms Flax states in her heart-warming book, generously embroidered with island poems, that to have been lucky enough to have lived on Peter Island was to have been born with a silver spoon in one’s mouth. Daily lives were spent fishing with pots, lines and seine nets.

A crawl (corral) was constructed in Harbour Bay (Great Harbour) to keep the catch alive and fish were taken over to Road Town several times a week. There was livestock too: pigs, cattle (on Norman Island), goats and chickens. A coconut plantation at the edge of Deadman’s Bay produced valuable food for both humans and animals, and conch was plentiful on the grassy seabed.

Other interesting details that emerge from the book: “A Puerto Rican man named LaFontaine (Ned) married Ms. Flax’s Aunt Estelle and … “He brought … a motorized way of pulling in the nets … He took pride in the grapes he grew… He treasured the honey bee hive… had a very large chicken farm.” Much loved Aunt Estelle, “could throw out fry nets expertly… made shark oil and trunk oil… and made doilies and runners to beautify her well decorated drawing room.”

Percy Chubb, in his pioneering cruising guide, wrote of Sprat Bay in 1961, “It is generally chock full of local fishing vessels and is not often used by yachts.” Another account relates a story of a seaplane landing in Harbour Bay to pick up fish; all that has faded into the mists of history. Sadly, the once thriving little fishing community with its island way of life has gone.

The old LaFontaine House with the date, June 17, 1958, inscribed in the once wet cement is still visible on the steps. The kitchen, the bunkhouse and the old shop are still there and down in Harbour Bay the detritus from the once thriving fishing business can be seen – including an old winch used for hauling in the nets.

It was in 1968 that Norwegian millionaire Peter Smedwig bought most of the island and began development of the Peter Island Resort. Sprat Bay was dredged to increase the depth for yachts and reclaim land to build pre-fabricated “A” frame chalets, a pool, lobby, bar, dining room and offices. In the late 70s the resort was purchased by the Amway founders, Richard de Vos and Stephen van Andel. For years the resort was one of two premier luxury resorts in the BVI. It had a marina popular with mega yachts, a sophisticated spa and several self-contained luxury villas. Its long palm-lined sandy beach was considered one of the best in the world. The resort attracted film stars, music legends and sporting giants. One of the most recent upgrades was the installation of two large wind turbines in a progressive move to supply most of the resort’s electrical energy needs, be more environmentally friendly and save on fuel costs.

Now, with renovations from the devastating storms of 2017 and the more recent crippling effects of the CV-19 the resort, like several others in the BVI, is struggling to re-emerge. But have no doubts, with its unique and exceptional location Peter Island will rise again to be a shining star in one of the world’s most attractive archipelagoes.

Thanks are due to Andria Flax whose informative cultural and historical book, The Way We Were, provided valuable information for this article.

Life today can be super hard. If you aren’t orga

COVD 19 has ushered in multiple changes for everyo

There’s something I love about this time of year

With the constant growth and evolution of social m

What are you thankful for today? #begrateful #bet

A treasure chest of unspoiled islands, the Virgin

November is Gratitude Month! Take time out to app

You may have heard about celiac disease, an autoim

The history of the Caribbean is intertwined with i

We are what we eat.

It’s the most wonderful time of the year! Christ

The challenges of life can take a serious toll on

Being Emotionally Well The challenges of life can

Get on Track with Your Spending It’s the most w

The new Issue of VI Life & Style Magazine is now a

It’s the one thing most women dream about; their