For a little taste of France in Tortola, head over to the Royal BVI Yacht Club on any afternoon or evening for lunch or dinner. 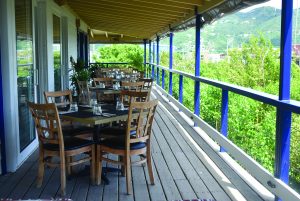 “Le Cabanon” serves traditional French dishes, as well as soups and salads in a relaxed atmosphere by the shore. The restaurant opened recently and is gearing up for the busy tourist season.

You’ll recognize the place by its logo and mascot: a frog.

Owner and chef Christophe Boisgirard said when he first came to the BVI from France, all the English people called the French “the frogs” while French people would call their counterparts “roast beef.”

So if you want to go to Le Cabanon, you could also say, “let’s go to the frog’s place.”

Le Cabanon is the traditional name in the South of France and is used to describe fishermen’s shacks where fishermen used to tie their boats. Their wives began selling food at those shacks and cooking what their husbands would catch for the day as they awaited them.

These were called le cabanon. In France, there are many restaurants that are called the same thing and serve the same purpose as they did years ago.

When Christophe wanted to import fish to Tortola, he set up a shop in Road Town called “Le Cabanon.” He opened this restaurant in 2007 and sold it ten years later when he decided to go back to the water as a boat captain.

But when he saw the opportunity to open a restaurant again, this time in the Royal BVI Yacht Club, he took it in 2017. In July, the restaurant opened its doors and the establishment was eager to make an impression on the community once again.

On any day, you could find ribeye steaks, cod and other fish, shrimp, lamb, and duck. And desserts include creme brulee, macaroons, and apple turnovers. All of the recipes are created by Christophe and his head chef, who is also French, and improved upon as the two see fit.

Previous Article
A Smile Is the Best Thing You Can Wear
Next Article
What Are the Health Benefits of Lemongrass Tea?