RFA Mounts Bay Remains in the Region Throughout the Hurricane Season

In the aftermath of Hurricanes Irma and Maria in 2017, many in the Territory felt safer knowing that UK military commandos, Royal Navy sailors and other professional first responders stationed aboard the Royal Fleet Auxiliary Mounts Bay were on hand to help distribute relief supplies, maintain law and order, and begin the immediate tasks of rebuilding.

The ship has one mission this summer: to provide speedy support for the duration of the Atlantic Hurricane Season. The first step is to carry out familiarization stops at the various islands, which allows local authorities and first responders and key Mounts Bay crew members a chance to meet in person ahead of any potential emergency. The Mounts Bay’s Virgin Islands stop on May 27 included meetings with representatives from the National Disaster Management Council including Police, Fire and Health officers. Technical advisors from the Department of Disaster Management and the Public Works Department also accompanied the aircrew on a “flyover” of the Territory to share advice on probable access issues and potential landing sites, should the need arise. 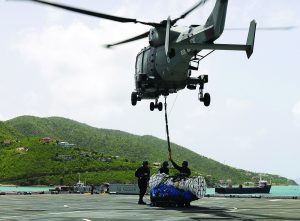 The visits also give key personnel a chance to share the latest information on preparedness and response capabilities and to strategize for the season ahead, according to the Mounts Bay’s Commanding Officer Captain Jeremy Macanley.

“Visits to the UK’s overseas territories, however brief, allows Mounts Bay to be better prepared to deliver help in the event of a disaster – my aircrew’s familiarity with the topography will permit a more focused response should we be called to assist,” Captain Macanely said.

The Mounts Bay is staffed by a variety of civilian and military crew including Naval Air Squadron and Commando Royal Engineers, plus medics and other first responders. Under normal conditions, the ship can accommodate a crew of 350. In “overload” conditions, the ship can safely accommodate 700. Known as a Bay Class because of its ability to launch and land helicopters, the Mounts Bay is just one of three Royal Navy ships of her size.

As a humanitarian relief ship, the cargo is focused on equipment most needed in the initial response phase after a disaster: tractors, diggers, trucks, quad bikes, command vehicles, all-terrain vehicles, and disaster relief stores. Many of these items can be airlifted by the Wildcat helicopter right from the Mounts Bay deck, meaning that even if port and docking facilities are damaged by hurricane or other disaster, the ship can still provide assistance informed Lieutenant Mark Finnie, the officer in charge of the Wildcat’s navigation, sensors and weapons systems.

“The ability of the Wildcat to carry equipment and also land in very small areas was key in the effort after Hurricane Irma in 2017,” Lieutenant Finnie said, adding that “the opportunity to work with the disaster relief team ahead of the hurricane season allowed us to identify key infrastructure pinch points and gave us an idea where we would be able to drop off stores and equipment, should the need arise.” 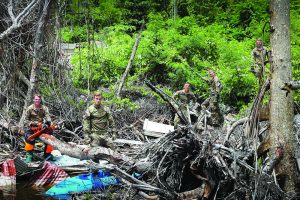 He added that the pre-season visit to the Territory was valuable in maintaining the Mounts Bay’s connection to the people of the Territory.

“It was important for us to continue the excellent relationship we have with the Disaster Management team and the British Virgin Islands as a whole,” Lieutenant Finnie said.