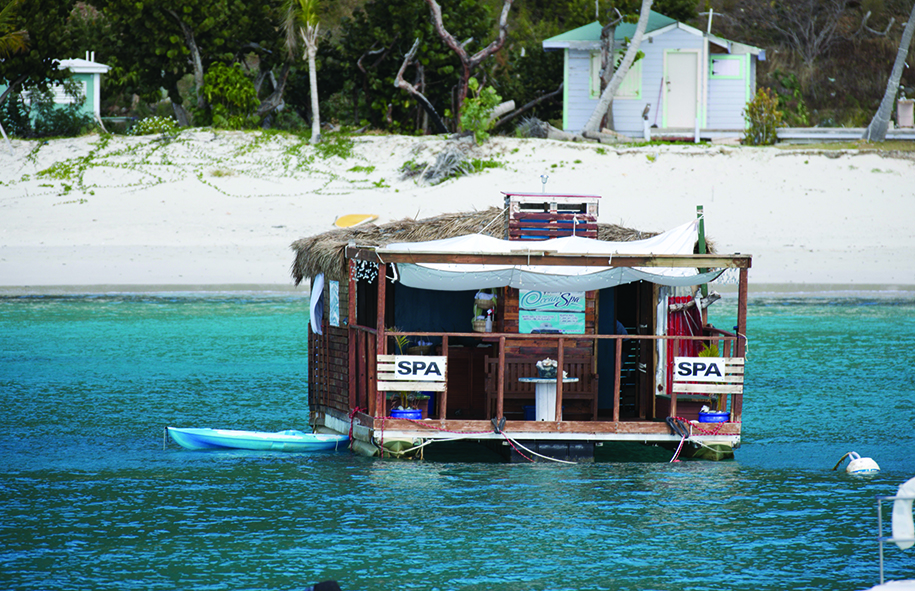 Sailing into the turquoise, pristine waters off White Bay, Jost Van Dyke in mid-January while covering the finish of the 14 miles Painkiller Cup, among the many boats, I saw what looked like a floating house, then spotted the name Ocean Spa. Wait, I said to myself, someone had sent me an image of the spa in a story, days before.

I saw the name Dale Mapp and my memory was jarred as I knew him, but at the time, I was too busy trying to get to the shore before the racers of the Painkiller Cup arrived in order to get great coverage.  Then was not the time to explore this innovative business marvel.

Finally, I called Mr. Mapp, who for ten years running, has been a fixture in the hospitality industry, starting in his native Barbados at Sandy Lane, with additional experiences at a St. Lucia casino, then Scrub Island and Peter Island. All that time, he had been harbouring the idea of working as if he’s on vacation. Mapp had a vision of what he wanted, but it was nothing like the finished Ocean Spa in White Bay, which he said evolved as each attempt with the idea kept getting better and better over the years.

“I was conceptualizing something that looked like a boat with massages on it but it needed to stand out,” he reflected. 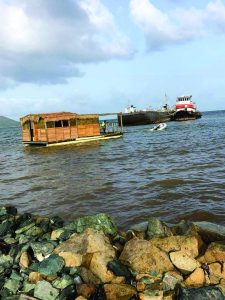 Working at Peter Island at the time, Mapp, at his September 2 birthday celebration with friends in 2017 explored the idea of getting a trade license for his innovative idea and the possibility of having a second income, by hiring someone to run Ocean Spa.

“I was celebrating on Saturday, Irma hit on Wednesday and my world got turned upside down,” Mapp noted of the devastating Cat 5 Hurricane, adding that he had choices including returning to Barbados and starting afresh or staying and looking for another job but then realized that option was difficult.

Unemployed and with the spa idea, he finally was able to move forward. “As long as my head was clear, I could focus on what I really needed to do,” he said. “I had listened to what people were asking for.”

After Irma, he had enough money to purchase the Pontoons to keep the boat afloat as well as aluminium and all the necessary frame structures before his money ran out. That’s when he turned to the dump from Irma’s debris, which provided all the necessary material to finish his dream.

“I found floor boards, siding boards, cupboard doors, someone’s gate, 2x6s to make the cross beams and plywood—pretty much everything after Irma,” he said, noting that all the materials were found on Tortola and it was built in Fat Hogs Bay, historically a place known for shipwright through the 80s. “I just wanted somewhere that would be safe, away from the public, build in peace and get into the water easily and that was the perfect place.”

During the process, Mapp was worried that another hurricane would come and destroy his work, so he tied it on to an old barge that had been lodged in Fat Hogs Bay since Irma.

“I said if any storm came, I’d ride it out in that,” he recalled. “After I got the all clear, I towed it down to Jost Van Dyke on October 21.”

Ocean Spa has two rooms but is large enough for four and one is able to see the fishes as they get their spa treatment on the massage table. Mapp said he chose White Bay on Jost Van Dyke because he wanted ‘the most beautiful beach in the BVI.’

“It also had to have a mixture of activity, plus peace and calm,” he explained. “And I found that over by Ivan’s Stress-Free Bar. That side is very, very quiet with the villa and is very calm.”

While opening hours are 9 a.m. -5 p.m., they can open earlier or later to accommodate guests and has done massages as early as 7 a.m.  “We also do moonlight and sunset massages as well,” he added. “Sunsets and moonlights are the two most romantic times ever that people celebrate. If you’re working, fishing, sailing, under stress, I just want to ease some weary muscles and tired souls when they come back home.”

Patrons feedback has been excellent, such as: ‘I’ve never done anything like it before, absolutely beautiful, heavenly, romantic, unique, sheer bliss, unimaginable.’

“I once asked myself, ‘What would be the ultimate experience for me in a spa?’ and I thought of the ocean and it didn’t exist,” the certified massage therapist fondly retorted. “So, I built it. It’s a craving that I envisioned and I was looking for, but it didn’t exist that I knew of. I couldn’t find it.”

The idea he harboured for ten years, has turned out to be even better that than he envisioned since its conceptualization and series of refinements. 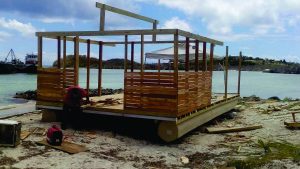 While leaving after Irma was an option, Mapp said there’s a certain thing about the BVI, a certain beauty, warmth, its people the atmosphere, that he’s just attracted to.

“It’s the most ideal spot. I couldn’t think of anywhere else,” he said noting that when he first came to the BVI and saw boats pulling up to docks for fuel and ice, he was simply amazed. “We have to learn not to take our environment for granted. I believe anything that can be one on land, can be done on water. The possibilities are endless. Every day, I had something written in my bedroom. The locations I wanted. Ocean Spa this. Ocean Spa that. Ocean Spar the other. I have designed this thing about fifty times already in my head. Use these screws. Use that nail, change it. It just went around in my head for years. It was an obsession.”

Mapp’s vision materialized to be bigger and better than he ever imagined.

“The appeal of it, the way it grabbed people, the story behind it made a whole lot of difference,” Mapp said. “People feel a connection. People that missed the BVI and were heartbroken by the way it was devastated, to come back here and see what we went through, every day is a reminder for everyone that comes to the spa. The whole concept, the mere fact that people go ‘wow’, how did you think of it; I’ve never experienced anything like it before, and it works. I just had an idea to build it and they’ll come.”

Mapp added, “We in the BVI have revolutionized the spa industry in the Caribbean. I won’t be surprised if someone else uses this concept.”