Get ready, set, and jump! 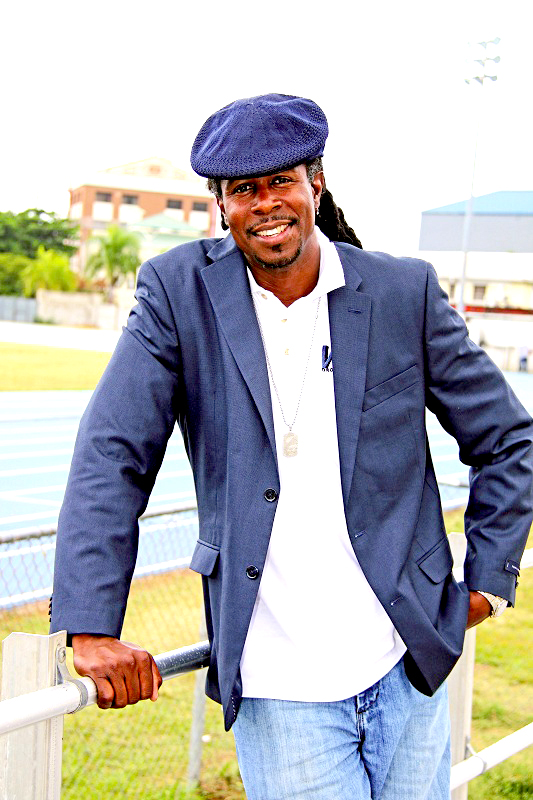 Exactly one hour before the powerful rays of the sun begin piercing the morning sky, Karl Scatliffe’s day has already begun and ends well after it sets. At almost 50, Karl shows no sign of slowing down as he sets aim on making the Territory healthier, beginning with our children.

Karl grew up in the Huntum’s Ghut and Lower Estate communities and was educated at the Road Town Primary, now the Althea Scatliffe Primary and what was then the BVI High School now renamed the Elmore Stoutt High. As a young boy, he enjoyed softball, volleyball, track and field, and basketball, but these sports were dropped along the way for a one-man sport, the high jump, which was encouraged by his coach Ray O’Neal who at the time was the President of the VI Olympic Committee.

Despite coming in at a time when most athletes are starting to leave the sport, in his late 20’s, he was determined to do well, and well, he did excellent actually. Karl broke several national records in high jump: six feet six inches, six feet eight inches, and six feet ten inches all in the same year-1984. He also placed two US-based colleges on the map when he received scholarships to study Physical Education. He has competed at the Commonwealth games, Pan American Games, Central American games, Organization of the Eastern Caribbean States (OECS) Games, California State Games (where he was ranked the second in that state), and has traveled the entire South American continent and India competing in high jump.

Delve further into Karl’s past and his fascinating story is one mixed with nearly abandoned dreams, dangerous neighborhoods, bullets, stardom and home sweet home.

As many young athletes, Karl was promised a sports scholarship by the government, that never materialized. Frustrated, he decided to abandon his dream of competitive sportsmanship and headed for New York. There he quickly got involved with the hustle of working and living in the big city, when he received a life-changing phone call and the chance to attend the Compton Community College on a sports scholarship.

A thrilled Karl quickly packed up his belongings and closed the door on New York-work-life and flew, two days later, to California to begin school where he stayed for one year studying Physical Education.

That year was not an easy one as he lived in a dangerous neighborhood along with a few other students from the Caribbean, and he joked that there were times they ditched their beds for the floor to protect themselves from any stray bullets that may come their way. Luckily, none came and after one year, the “island boys” moved to lime among the stars at Los Angeles City College.

During the year at Compton Community College, he began exposing his abilities and shone the spotlight on himself, the Virgin Islands, and the educational facility, where more and more students enrolled because of the publicity and breakthrough in sports that the college saw. It had been more than 30 years since Compton Community College had tasted victory in any sport or entered the state’s championship.

At the Los Angeles City College, he continued his hard work and determination and the media loved him, Karl’s victories were documented and published in newspapers all over the US. He was not only walking on the same pathways that the celebrities walked, but he was, in fact, a celebrity in his own right. Using his seniority, status, fame and working alongside the coaches, he opened the way for countless emerging athletes in the Virgin Islands and the Caribbean to attend US colleges on scholarships.

In 1992, Karl returned to the Virgin Islands after the Olympic Games and decided to remain home and help his father in the family business: Scato’s bus service. At the time, the company served the local line with three buses which also transported school children back and forth to school from West End to the city. He took over operations in 1993 and since then he has added four new buses to the route and included taxis, tours, and a website: www.scatosbusntaxiservices.com.

Despite being busy in the family business and his own family, he still found time for sports. Currently, he is facilitating a Hoop it up Foundation where over 18 athletes from the Caribbean have so far received the opportunity to attend US colleges on a basketball scholarship. Out of the 18, at least 11 have graduated, including Kimani Stevens, whom he had the chance to witness his graduation this year. He admitted that it was “a very touching moment.”

Still on the constant look out for an avenue to give back to the community in the area of physical education, he initiated the VI Sports for life in 2015 which is an sports organization that organizes leagues, games and tournaments for all ages including school children and the 40 plus games for adults.

The VI Sports for life started as a Pre -school game and was expanded in 2016 to include the primary schools, thus changing its name from Pre-School games to the Pre-Primary games, and from a one-day event to a two-day event. The 40 plus games for adults, came about to afford older players to compete among themselves and be more comfortable while doing so in netball and basketball.

In the near future, he intends to spearhead the Paralympic Games for the Virgin Islands, to give persons who are in one way or other disabled a chance to be not only physically active, and to be able to interact with others, but to compete.

Karl is currently an International Association of Athletics’ Federation (IAAF) High jump coach and trainer, which means that he can train on a global stage. Now residing at Haver’s Estate, he is the father of five and  recalls the highest moment of his life was when he attended the Olympics and had to walk with the VI flag held high being cheered on by people from around the world and competing on the big stage.