From Images to ‘Irmages’ and Back 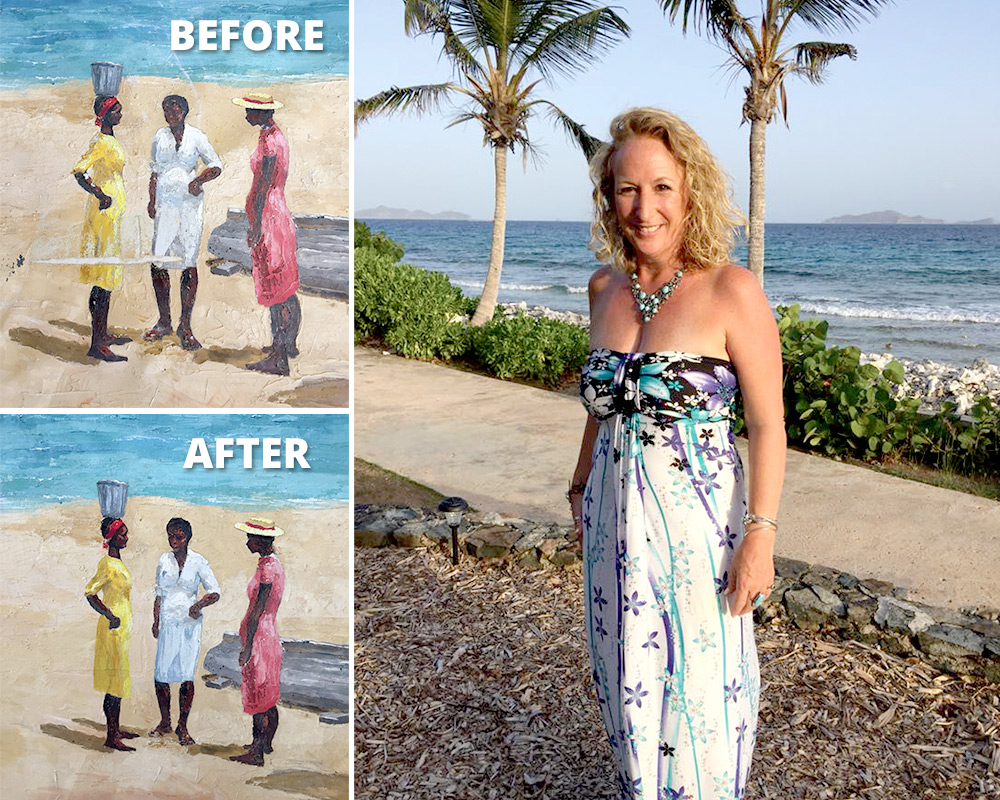 im·age: a representation of the external form of a person or thing in art.

In the British Virgin Islands, most residents relate the word Images to a fanciful framing shop and Caribbean-style art gallery owned by BVI Belonger, Lisa Muddiman Gray.  But before Images, many will remember The Gallery – a small fine art gallery and retail shop located in one of the many characteristically charming and historic West Indian buildings on Main Street in Road Town. Established in 2003, Lisa displayed and sold her own paintings and those of several local and resident artists. As the popularity of The Gallery, and, simultaneously, the population of the B.V.I. increased, Lisa realized that there was a demand for picture framing which led her to open a second location on Wickham’s Cay 2 where she founded Images Custom Framing. Meanwhile, back on Main Street, The Gallery became more and more successful as Lisa curated art exhibits featuring local art & craft.  The Gallery remained there for 10 years until, in 2013, Images Custom Framing & The Gallery consolidated and moved fully over to Wickham’s Cay 2.

As Road Town and Lisa’s business grew, she took a leap to a new location once again in 2017 and one that seemed to be an opportunity not to miss.  To be back in the heart of Road Town in a building that had both Waterfront and Main Street access seemed ideal. In August of that year, she joined a casual co-op of shops that included Nutmeg Designs & Bleu Chocolat. Lisa had just finished unpacking her boxes and hanging art on the wall, when she dodged “the August Floods” bullet. But then the most unlikely happened: Hurricane Irma bestowed her wrath on the entire region. Enough said…

Fast forward, and after months of searching for a new location in devastated Road Town it became all too apparent that looking further afield for a functioning building with a roof and electricity where Lisa could start to put the pieces of her business back together was the only option. In February of 2018, she found a bright, spacious building in East End where she moved what she had left of her supplies and tools and reopened.  As soon as she opened the doors, the word was out and customers were filing in with their damaged artwork for repair or reframing. Lisa realised immediately that Images would soon take on another dimension and “art restoration” would be included in her repertoire of services as so many precious pieces of art throughout the Territory had been turned in to “Irmages”! Artworks streamed in, owners asking for help to save their precious collectibles: twisted and broken frames, paintings ripped open by flying projectiles, broken glass embedded in the works, mold infused canvases, each one “Irma-ized” in various unthinkable ways.

To customers brought in their treasured yet trashed art, Lisa became a listener, a consoler, as they poured out the details of their personal experiences during the storm. Some pieces of art thought lost had often been found far from their original locations, some sat submerged in water for weeks as Hurricane Maria passed. And sadly, Lisa also listened to the stories of pieces that were never found again.

As she methodically cleaned the surface of paintings, removed debris, broken glass, paper, vegetation, flecks of paint, she often felt heavy with emotion reflecting on Irma: the damage the storm had caused to so many mentally and physically, the displacement of friends, the new way of life that Irma had forced upon her victims.  Her interaction with the owners of these pieces made her realise how much each piece meant to each soul who entered her shop. Lisa and her assistant diligently added pieces of canvas to paintings and repaired the holes. They touched up areas, mixing the paint colours to match. When the customers returned to pick up their repaired art they were emotionally uplifted and even more so when they could not make out where the damage had been. Upon picking up their restored art, Lisa’s customers felt that the storm had subsided, many of them were back in their homes and had roofing on, windows back in place. They were clean, dry and had walls on which to rehang their cherished pieces: the final phase to make their homes feel normal again.

With lessons learned, love of art still fully intact, and a leap of faith, Lisa today prepares to return to Road Town and back into 164 Waterfront Drive with full framing and art restoration services, a fabulous ever changing art gallery and plans for upcoming exhibits. Look for the grand opening of Images Custom Framing & Art Gallery and her new partnership with Nutmeg & Co: a full one-stop shopping experience of art, gifts, furnishings and accessories with an important accent on the sustainable and locally and regionally made.