[blockquote style=”2″]We are just identifying the talent and giving them the platform on which to showcase their talent,” explained Acting Director, Department of Youth Affairs and Sports Brenda Lettsome-Tye.[/blockquote] 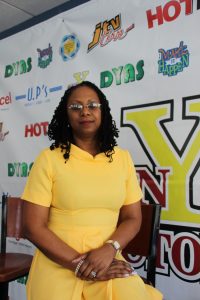 Acting Director, Department of Youth Affairs and Sports Brenda Lettsome –Tye told VI Life & Style Magazine that this year the department embarked on a kind of a promotional rebranding campaign with the focus on youth aged 15-29. “And we thought of what way could we highlight the positive that the youth do and we came up with the GEN – Y factor show. The purpose is simply to identify and showcase the talent of youth in the territory,” she said. According to Lettsome-Tye, the event is loosely based on the X-Factor show in the USA.

On Monday, 29th February 2016, an audition call was made where some 32 persons signed up to participate. At the end of the show, only 15 made it to the semi-final on Tuesday,1st March 2016, both events took place at the UP’s Cineplex. Those who made it to that round underwent a master class where they were taught stage presence and vocal training. On the 9th of April, another show was held and eight made it to the final round. The shows were only open to family and friends of participants and entrance was free. 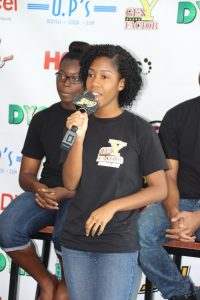 One of the participants-Kaywanna Pope performing acapella style at the JTV Studio at the U.P’s Cineplex.

Organizers are hoping to have a cash prize and so far major sponsor -Digicel will be providing the opportunity to be the company’s spokesperson for one year, free handsets with service, among others, HomeGrown Studios is offering to develop a professionally produced song and sunglasses, clothing, dinners also make up the prizes.

“We are not promoters. We are just identifying the talent and giving them the platform on which to showcase their talent. So it is up to the producers out there once we have identified them and they see the talent that they have if they wish to approach them and take it further and even if they are interested because some of them are not interested in that they just very happy singing and performing,” She remarked. “We are really excited about the show,” she continued, saying that this is the first event and she is hoping that it becomes an annual one. “We have already had requests for making it an annual show but our focus now is to put on the very best production that we can and keeping in mind that our target, our goal is highlighting our youth.”

The former X-Factor winner will also be performing.

The price is $15 per adult, and $10 for students in advance and more at the door, and the venues for purchasing tickets to be announced later.