Dr. Richard Georges – Giving Back to the Institution that Shaped Me: HLSCC

BVIslander Dr. Richard Georges, 38, has spent more than half his life working for the Hamilton Lavity Stoutt Community College HLSCC. 21years, in fact! 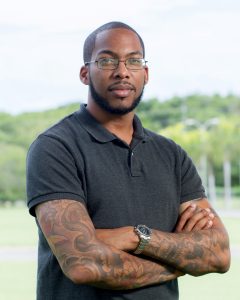 “I am extremely invested in the college; I’ve had some very formative experiences there,” he told VIL&S in this exclusive interview. “I owe it a great deal…I feel indebted to the institution.”

In fact, from studying Natural Sciences in High School and then getting interested in Graphic Design while on job-training, Richard quickly switched to Computer Science at the college before acquiescing to his inner self as an English major.

The son of William and Esther Georges is very proud of his affiliation with the college. He is from the Class of 2000, graduating with Associate Degrees in English and Government and Political Science.

Though he recalls some good conversations with teachers/lecturers, including the late Stanley Gordon, about politics, his interest in the political field remains purely academic.

These courses of study were pursued while managing a career as a Teaching Assistant and Graphic Designer, a Senior Lecturer and Head of the Humanities Department, and Director of Institutional Advancement at HLSCC.

Throughout this time, Richard was publishing poems, stories, and essays. He recalls writing his first book, ‘Make Us All Island’ in 2017 out of the research done for his doctorate. That book was shortlisted for the Forward Prize for Best First Collection.

His most recent book, Epiphaneia (2019), won the 2020 OCM Bocas Prize for Caribbean Literature. His second book, Giant (2018), was highly commended by the Forward Prizes and longlisted for the OCM Bocas Prize.

Richard is the recipient of a Fellowship from the Stellenbosch Institute of Advanced Study and has been listed or nominated for several other prizes, including the Hollick Arvon Caribbean Writers Prize, the Wasafiri New Writing Prize, and a Pushcart Prize.

“…(these opportunities) opened up a lot of doors for me in terms of networking within the region and further afield,” he said.

“It was emotional. I was very much humbled by it; I mean, I was amazed,” Georges said of that award. It was more meaningful than the others because he was being recognised by his fellows among his family and friends, making it a more intimate and personal experience.

With this 3-year appointment and as a Phi Theta Kappa certified Leadership Development facilitator, he is expected to create some workshops, do some mentoring, and work towards developing and publishing poetry and literature in the territory.

From pulling network cables through walls, Dr. Georges quickly rose from Vice President to Acting President and now the youngest President of his alma mater, the H. Lavity Stoutt Community College. He was appointed to the top post on October 1, 2020, and is the first alumnus to lead this Community College in the BVI, which was officially established in 1990.

HLSCC is now at a pivotal stage in its development, having just commemorated its 30th anniversary.

“I think it’s at an inflection point…there are several paths before the College (but) what I would hope to leave as a legacy is that I’m able to guide the institution, along with the support of the administration and the board, of course, the entire faculty and staff, into the next phase of the College’s development,” President Georges said.

He said that includes a buttressing of technical and vocational studies, broadening the scope of their institutional relationship with other universities, more aggressively pursuing grants and other opportunities to raise funds for the institution, and broadening the net outside of the territory into the region.

Under the previous President, Dr. Georges was tasked with spearheading the conversion of textbooks from physical to digital and developing partnerships with other tertiary institutions.

The dream of the college’s founder, the late 1st Chief Minister Honourable Hamilton Lavity Stoutt, and the college’s vision is to become a regional institution of choice. The new President is very mindful of that and wants to do his part in that regard as they seek to grow and market the niche training opportunities currently being offered, such as in the marine and culinary departments and the new solar technician training programme.

“So the legacy I would hope to leave at the point in time when I depart this post is that the college has made forays into the wider regional market, it has further solidified itself as an institution where excellent education can be gained, and that it has established itself as a truly international institution, both in terms of the students it attracts as well as the economic and development partnerships,” the new President said.