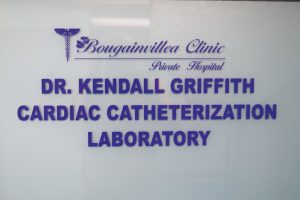 Bougainvillea Clinic, located in Road Town, Tortola, continues to make significant advances in the medical industry with the successful completion of the first-ever kidney transplant in the Virgin Islands.

On December 7th, 2019, one of the patients on dialysis in the Territory, Neville Salmon, took a leap of faith and to date, according to reports, he is now leading a normal life.

When local cardiologist Dr. Heskith Vanterpool, MBBS, FRCP, MSc. took over the Bougainvillea Clinic in 2010, his vision was to develop the existing facility specializing in plastic surgery into a state of the art modern hospital. He wanted it to be an in-patient hospital and outpatient facility to complement Eureka Medical Centre, which is purely an outpatient facility that started in 1985.

“I see my medical facilities as making an effort to provide modern state of the art medical services and procedures that previously could only be obtained off-island and I see the vision of Bougainvillea Clinic and Eureka as playing the seminal role of bringing these services to the people of the Virgin Islands right here at home,” he told Virgin Islands Life & Style Magazine.

Bougainvillea has in fact grown into a multi-specialty outpatient facility over the years, with eight doctors specializing in general and internal medicine, gastroenterology, cardiology, general surgery, gynecology and obstetrics, orthopedics and dermatology.

One of these specialists, Dr. Dwayne Thwaites, who has worked at Bougainvillea for the past seven years, has been instrumental in bringing new services in relation to his urology services. He was able to connect with two colleagues with whom he performs prostate screening and kidney transplants in Antigua/Barbuda and the team at Bougainvillea reached out to the local community seeking persons interested in pursuing a kidney transplant.

“Neville had kidney failure caused by uncontrolled high blood pressure and was on dialysis for a couple of years,” Dr. Vanterpool stated.

The kidneys perform the essential function of removing waste products from the blood and regulating the water fluid levels. Basically, the kidneys filter the blood of impurities and get rid of it via urine.

According to Dr. Vanterpool, while most persons are born with two kidneys, they may lose one through sickness or accidents. But he pointed out that it is possible to live a normal and healthy life with just one kidney.

“In Neville’s case, he had both kidneys damaged because of hypertension,” Dr. Vanterpool said.

The kidney transplant procedure at Bougainvillea Clinic was highly successful.

Dr. Vanterpool reported that both patients only lost minimal blood and never needed blood transfusions or to go into the Intensive Care Unit ICU. They were basically nursed in private rooms, with the donor being released after two days. The recipient was kept for only four days as the doctors conducted further tests to ensure that his immune system was suppressed to prevent any rejection of the kidney.

Speaking to VIL&S, Dr. Vanterpool reported that more than a month and a half after the procedure, Salmon’s kidney function is now normal, he is on medication and is being monitored on a regular basis to make sure he has the right therapeutic level of the anti-rejection medication.

But the patient has not been back on dialysis since the transplant.

A kidney transplant is one of the most effective ways to treat kidney failure.

The procedure can be expensive, but it saves money in the long term that is spent on dialysis and it dramatically improves the quality of life for the patient and their families who are affected.

However, there was no mention of kidney transplants in the benefits package or exclusion list. Dr. Vanterpool said the procedure at Bougainvillea Clinic did not qualify for coverage.

Dr. Vanterpool believes the local government can save millions of dollars allocated to dialysis treatment annually if more kidney transplants were done locally.

He estimates government’s spending to be over $100,000 on each dialysis patient annually. The average number of patients is between 40 and 60.

“By doing a kidney transplant and showing it can be done in the BVI, there’s clearly a need for the conversation to be had about the managing of kidney patients,” Dr. Vanterpool concluded. He said the costs not only include the medical procedure, but is extended to the productivity of the patients and their family members in the community.

Tags:
Previous Article
Leave Your Next Event with an Experience!
Next Article
Girl Up BVI

ZO To You: You Don’t Have to Live With Acne or Melasma!