Beef Island -Where there is no more sorrow

Have you ever heard the name Elizabeth Island? Well, this is the name that Beef Island was sometimes referred to in those days of long ago. It is said the name Beef Island came from the island’s earlier settlers (Buccaneers), whose main stock of trade was smoking beef (called Boucan) perfect for long voyages aboard ships. Beef Island is the main hub for tourist and visitors alike, with its welcoming airport and the bustling ferry services for several private islands and resorts, luxury properties. Boasting of inland entertainment and its own tranquil beach, Beef Island is a truly remarkable place! 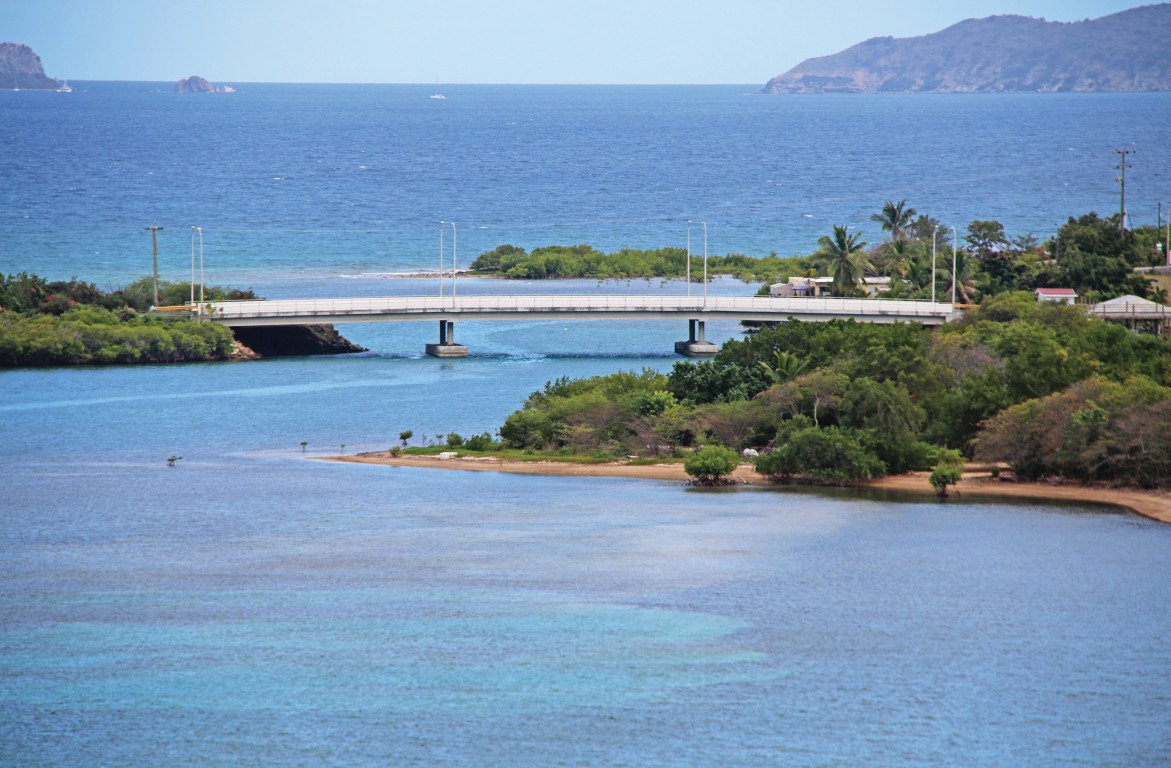 Entry to Beef Island via Tortola has quite an interesting history wherein a toll was required to cross a narrow one-lane structure called the Toll Bridge which was opened by Her Majesty, Queen Elizabeth II, during her visit in 1966. One had to pay a toll of between $0.50 and $2.00 which varied based on the number of persons per vehicle. In those days, an older gentleman tended the toll booth and would collect a toll by extending a stick at the end of which a painted coconut shell or tin can was attached. Once the appropriate toll was collected, permission was granted to cross the bridge.

Since such time a more modern concrete structure was built to replace the old structure which was made of stone and steel. This new bridge which opened in 2003 was a well needed and welcomed change for it allowed the flow two-way traffic across the 300 ft. channel. 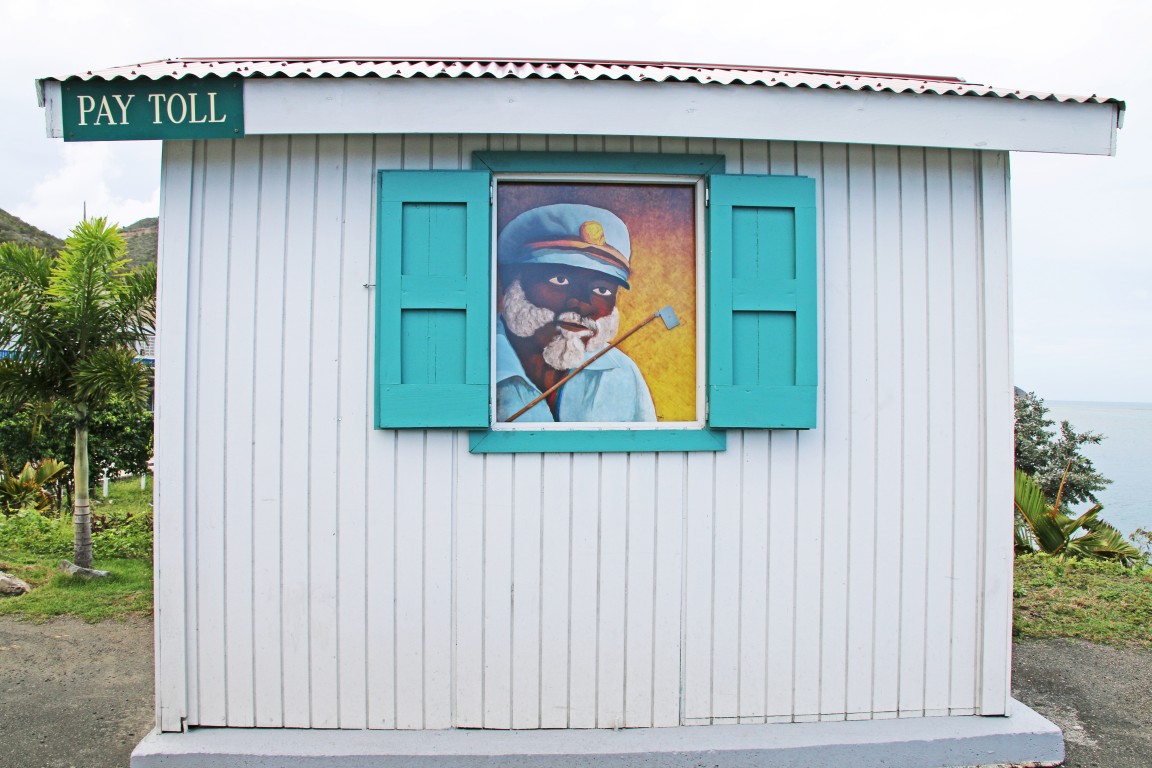 A painted portrait of Mr. Alton Turnbull (above) a former Toll Booth operator was completed in December 2016 by Artist Lutia Durante as per a request from the BVI Tourist Board, as a reminder of the past. 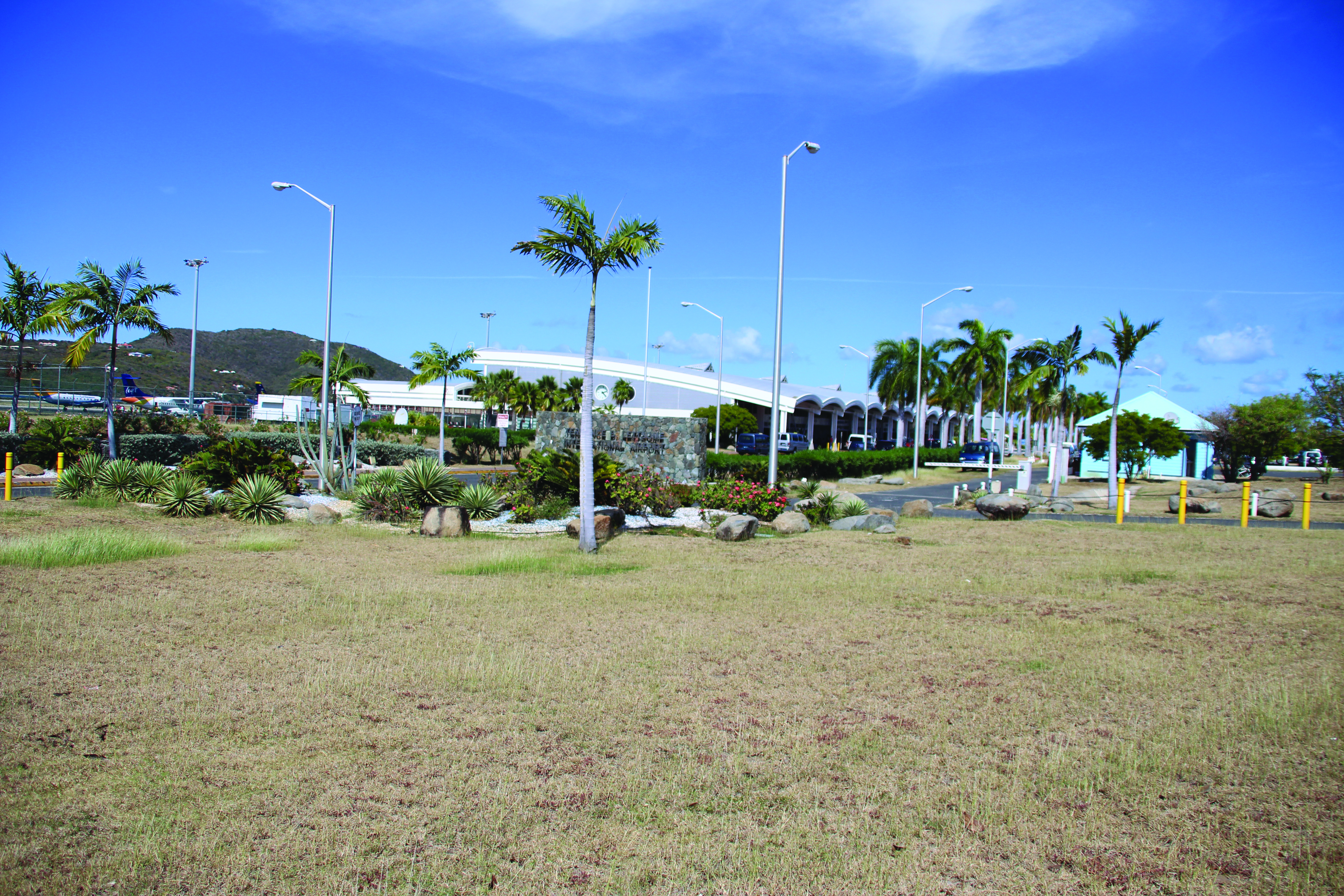 One of the most important places you will encounter on Beef Island is picturesque Terrance B. Lettsome International Airport.

In the year 2002, what was formerly known as the Beef Island Airport was renamed in honor of the late Terrance B. Lettsome, who was a former Minister of Communications and Works. In 2004, the T. B. Lettsome International Airport became the first of the Overseas Territories in the Caribbean to be certificated for the purpose of public transport and instruction in flying. 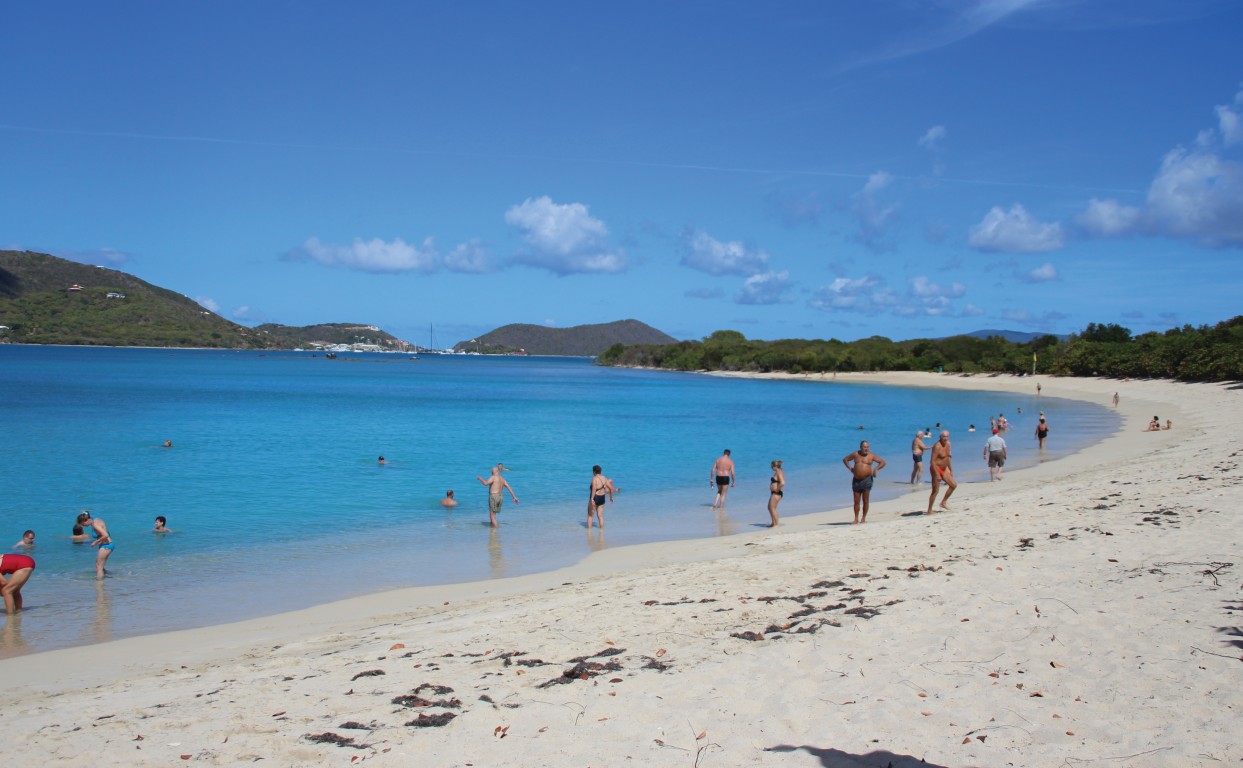 One of the hot spots of the island is Long Bay Beach.

With its ever blue hue water, washing up on white washed sand, it is no surprise that it is a popular spot for many, from the family getaway to the tourist’s recluse, to the occasional beach bash, to the wedding backdrop, to the exercise engine for the body builders.
Situated two minutes from the T.B Lettsome International Airport, it is also a great look out to the Camanoe Islands-Great and Little Camanoe.
Secluded, yet an open secret, is one way of describing Long Bay Beach. Getting there is easy, just look out for the second left opening from the main road immediately after leaving the QE 11 Bridge. 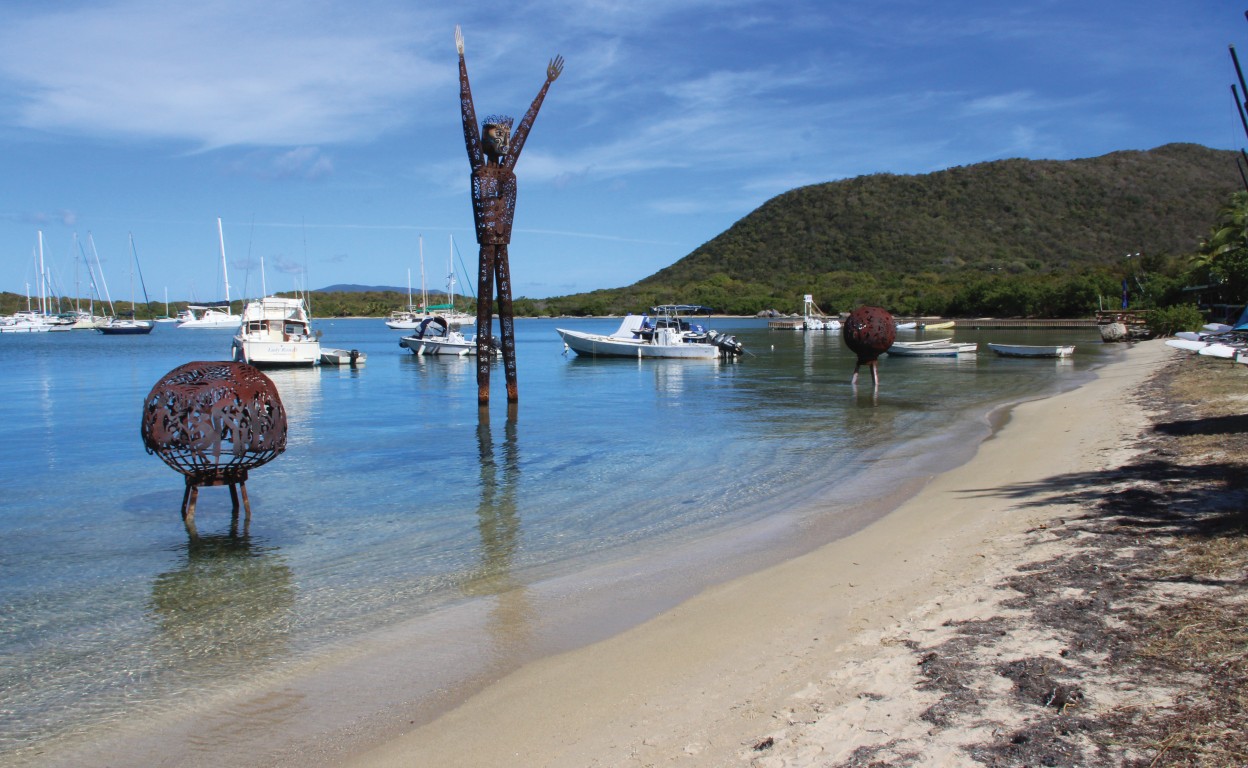 In everything, there is a pulse. Trellis Bay is the party pulse, or the non-stop action central on Beef Island.

Be it day or night, it’s fun filled reputation makes it an irresistible place with lots to see, do and eat! It is always buzzing with ferries to and from several islands such as Virgin Gorda, Guana Island, Scrub Island, Bellamy Cay Last Resort, among others, in addition to the other vessels that simply delight in being anchored at Trellis Bay.

Several restaurants offer loads of great tasting food and most are equipped with outdoor grills! It is always a pleasant sight to see the white smoke and take in the enticing aroma of barbecued meat that is a usual staple filling the air. Entertainment is always booming, as each restaurant or bar offers a variety of activities from movie nights to live entertainment, in the open, making it a lively little beach front.

Shopping is also made easy with the souvenir shops and the market place, where unique finds, souvenirs and fresh produce are in abundance. The water, which is usually in a calm and quiet shade of green is another major attraction for many. The sculpted fireballs and party man brings the party to the water when set ablaze with scraps and driftwood.

Rumor has it that Pirates also passed through and left their footprints in the sand at Trellis! According to Folklore, in the 18th-century, buccaneer Black Sam Bellamy, which it is said that Bellamy Cay is named after, looted islands of the Caribbean aboard his ship. He would then camp and pass the bottle around with his pirate friends on the Cay.

Bellamy Cay is now home to the Last Resort Restaurant and bar, the go-to place for anyone who doesn’t have a problem in taking a brief boat ride away for smashing food, great drinks, and entertainment.

Now, no one can speak of the action central and carved fireballs and party man in the water, without touching on Aragorn’s Studio and Local Arts Centre. 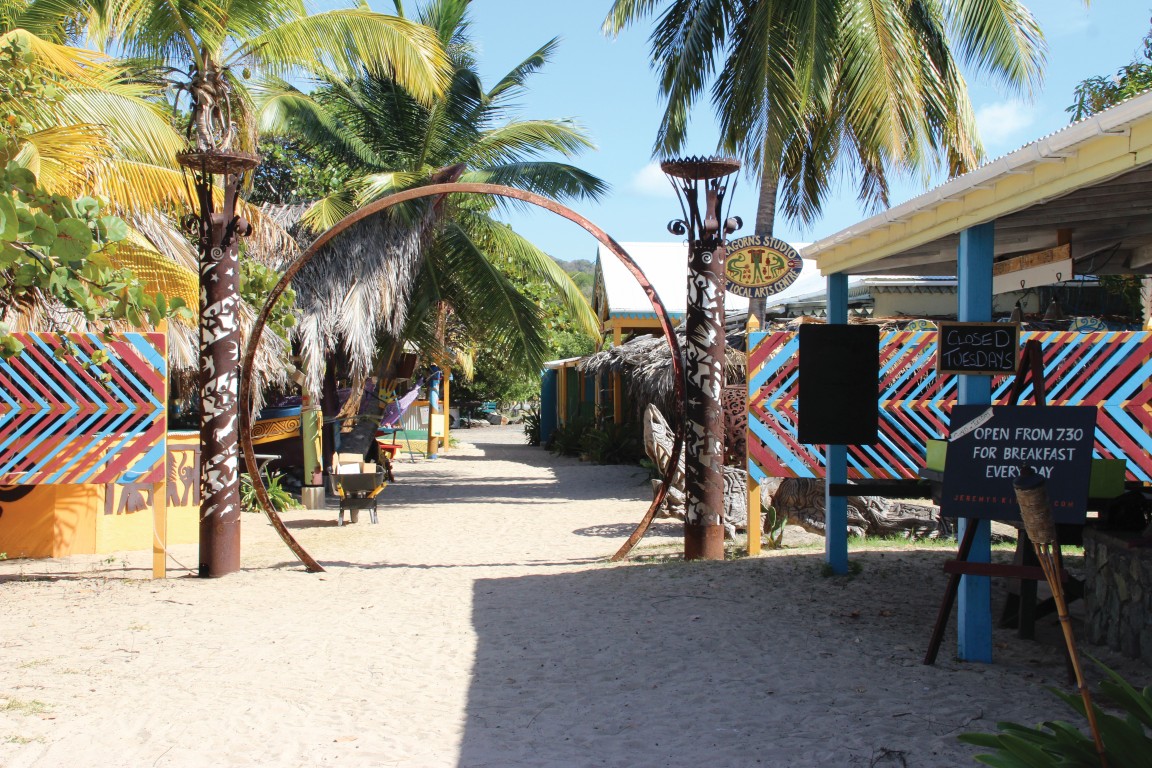 The art and craft extraordinaire, Aragorn Dick-Read, is the master artist who with his carving work has taken art to a whole new level with his pyramids, spheres and cubes that he uses to light up the full moon parties at Trellis, that he along with Jeremy Wright of Jeremy’s Kitchen host to welcome the full moon as well as the new year when it swings by.

From the broom clean streets to the sleeping turquoise ocean, to the air traffic hub, to the action central, Beef Island, is an area of a wealth of history and pulsating rhythms. It will surely captivate your senses, ease your mind and leave your worries and sorrows behind! 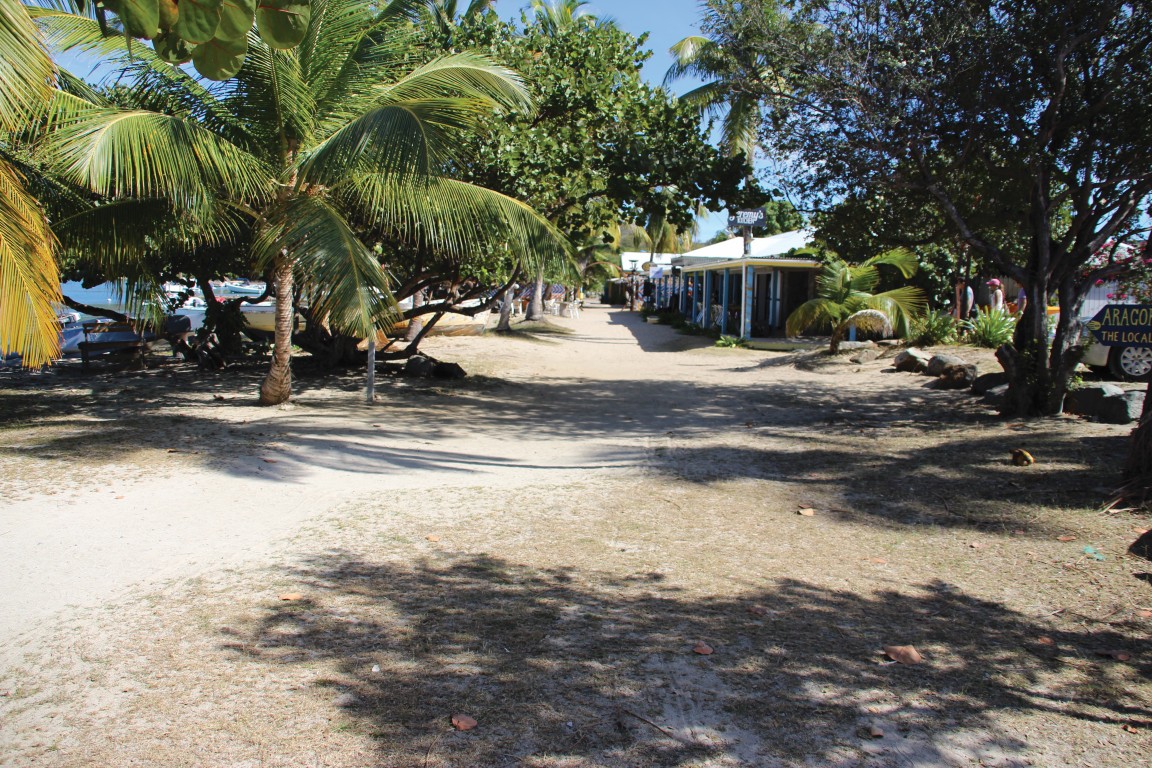