A Chat with the Virgin Islands’ First Local Dentist 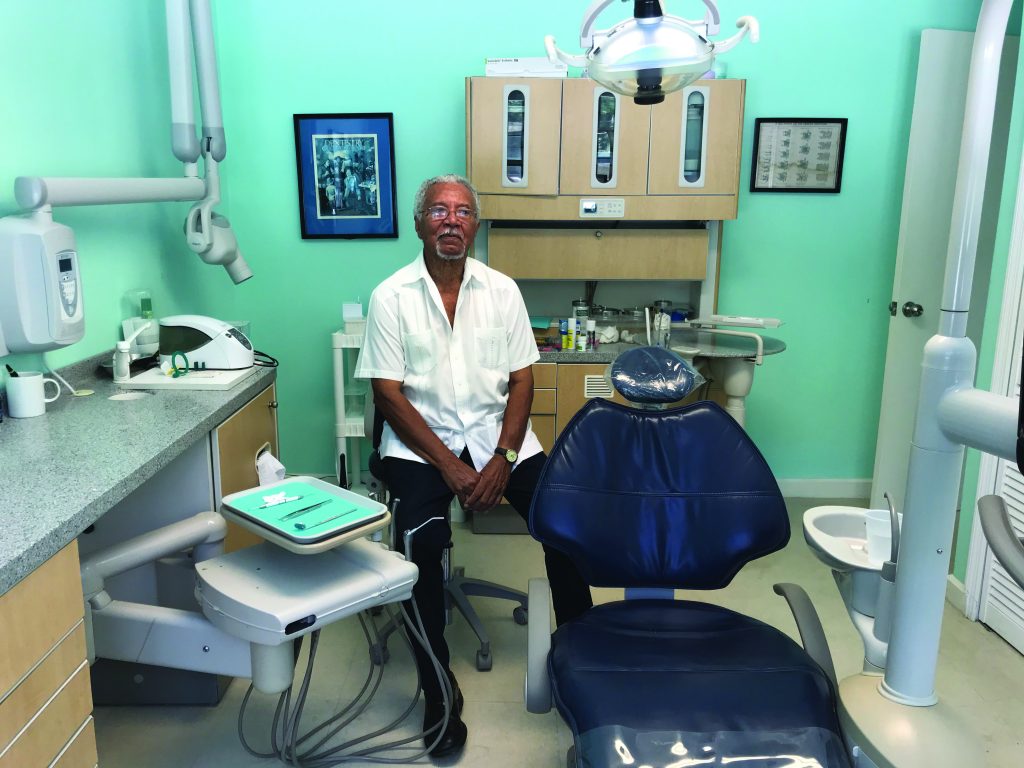 Dr. Marvin Flax DDS (Doctor of Dental Surgery) never really wanted to become a dentist! That fact goes against the grain of his early idea of what career he wanted to pursue. But the reality of his life sees him practicing in the field today, nearly five decades later, as one of the most successful and recognized dentists in the Virgin Islands.

As a youngster growing up on Virgin Gorda, the most exposure he had to dentistry was when a dentist from Tortola would visit the island and carry out procedures in his grandfather’s home or under the tree in the yard. His grandfather made these accommodations as the Government Agent.

In those days, dentists would come to the Territory on contract from the United Kingdom.

“I didn’t know I wanted to become a dentist,” he told VIL&S. “As a youngster, way back when I was five years old, I wanted to become a  physician, but I didn’t think about dentistry at all. In fact, it was around that time I acquired the name Doc because I used to play around with medical kits a lot.”

He began his working life in 1958 and gained some valuable experience at the Treasury and Customs Departments, the Administration Department and the Legal Department over a 10 year period.

Around 1967/8 when he was Clerk of the Legislative Council, Flax began getting a bit disgruntled with himself, as he realized he was getting older and he was somewhat dissatisfied with his life. He said he was thinking he had to do something more than just waiting to be transferred within the civil service where he possibly would have eventually risen to the level of Permanent Secretary.

He said he wasn’t sure he wanted to wait around for that, so he applied for a scholarship, got it and went off to study at Inter American University in Puerto Rico. There, he majored in Biology with a minor in Chemistry. He also did Physics and French and graduated in 1972 with a Bachelor of Science Degree in Biology.

Now empowered as he sought to fully establish himself in a career, Marvin Flax enrolled in Howard University in Washington DC in 1977, where he successfully pursued his Doctor of Dental Surgery DDS degree.

He immediately returned to the Virgin Islands to resume his civil service career, taking up a position as Dental Officer in the Health Department. While another local qualified as a dentist back then as well, Flax was the first and only local dentist to return home to practice. Since then, the Territory has seen a few who have trained and returned.

It was only after immersing himself in the study of dentistry that Flax said he actually began to like the profession and in practicing, he began to appreciate it more.

His job as the government’s Dental Officer (as the position was called back then) was to treat school children, prison inmates, indigents and the elderly, whose care was provided by the government free of charge. He also treated adults, but they had to pay into the Treasury.

Based on Tortola, he also travelled to Virgin Gorda, Anegada and Jost Van Dyke to treat patients on those islands as well.

Thousands of school children, many of whom are adults now, would recall having to regularly visit this dentist’s office. There was a particular period, one that he recalled proudly when he spearheaded the introduction of the fluoride programme in the Virgin Islands.

Dr. Flax explained that fluoride helps to strengthen teeth against decay and was commonly used throughout the world. Cavities were rampant in those days and in an effort to reduce the incidence, on specific days, students would visit the dentist’s office to get their fluoride rinse.

Dr. Marvin Flax stayed in the position of Dental Officer until he retired from the public service in 2005.

But even after decades in the practice, he can still be found eager and available to provide his services at his private office Crown Dental, which he established in late 2006, at Suite #1, Road Reef Plaza.

On reflecting over the decades, Dr. Flax noted that there have been many changes in the practice, as dentistry is a very progressive and innovative profession. He pointed out that the changes are remarkable in terms of the equipment used and methods of practice.

For example, while dentists are trained to try and save teeth as opposed to extracting them, the way of replacing lost teeth (implants) 40 years ago was not very popular and required more effort on the part of the dentist. Today’s treatment modalities using computers and cameras and other equipment are faster and easier.

“A patient wants when you come to the dentist to see what the problem is and no computer can tell you that; I still have to have a certain amount of knowledge even with the innovations,” Flax said. “As a dentist, I have to make a good diagnoses of the dental problems and I have to be able to treat it because if you can’t diagnose properly, you can’t treat. So I keep abreast and try to modernize as much as I can. In the final analysis, the procedure must be done right.”

Dr. Flax is happy to see more local dentists practicing here in recent years. He encourages others wanting to get into the field to consider specializing in major oral surgery, orthodontics or the diagnoses and treatment of oral diseases.

He doesn’t quite see himself retiring anytime soon.

“I can’t really say when I will retire, I guess another two years if my health continues to cooperate, maybe a bit longer, but I haven’t made any concrete plans to retire,” he mused. “In fact, I like what I do so much I don’t really want to retire. This is my life. It’s almost therapeutic for me. I’m not going to run away from it unless I’m forced to. But the time eventually comes for all of us when we have to call it quits.”

If Dr. Marvin Flax DDS has his way, he will be Dr. Marvin Flax DMD one of these days. He would like to see the degree changed to a Doctor of Oral Medicine to make it more inclusive of today’s trends and practices.

Previous Article
Stopping Hand, Foot & Mouth Disease in Its Tracks
Next Article
Beauty is Her Name