As most millennials typically do, I woke up on July 1, 2022, turned on my phone and got ready to catch up on the news via social media. My curiosity was peaked as I came across a video of what seemed to be a pod of Short-finned Pilot whales (Globicephala Macrorhynchus) navigating through the turquoise shallow waters off the coast of Anegada on their sojourn through the Puerto Rico Trench. 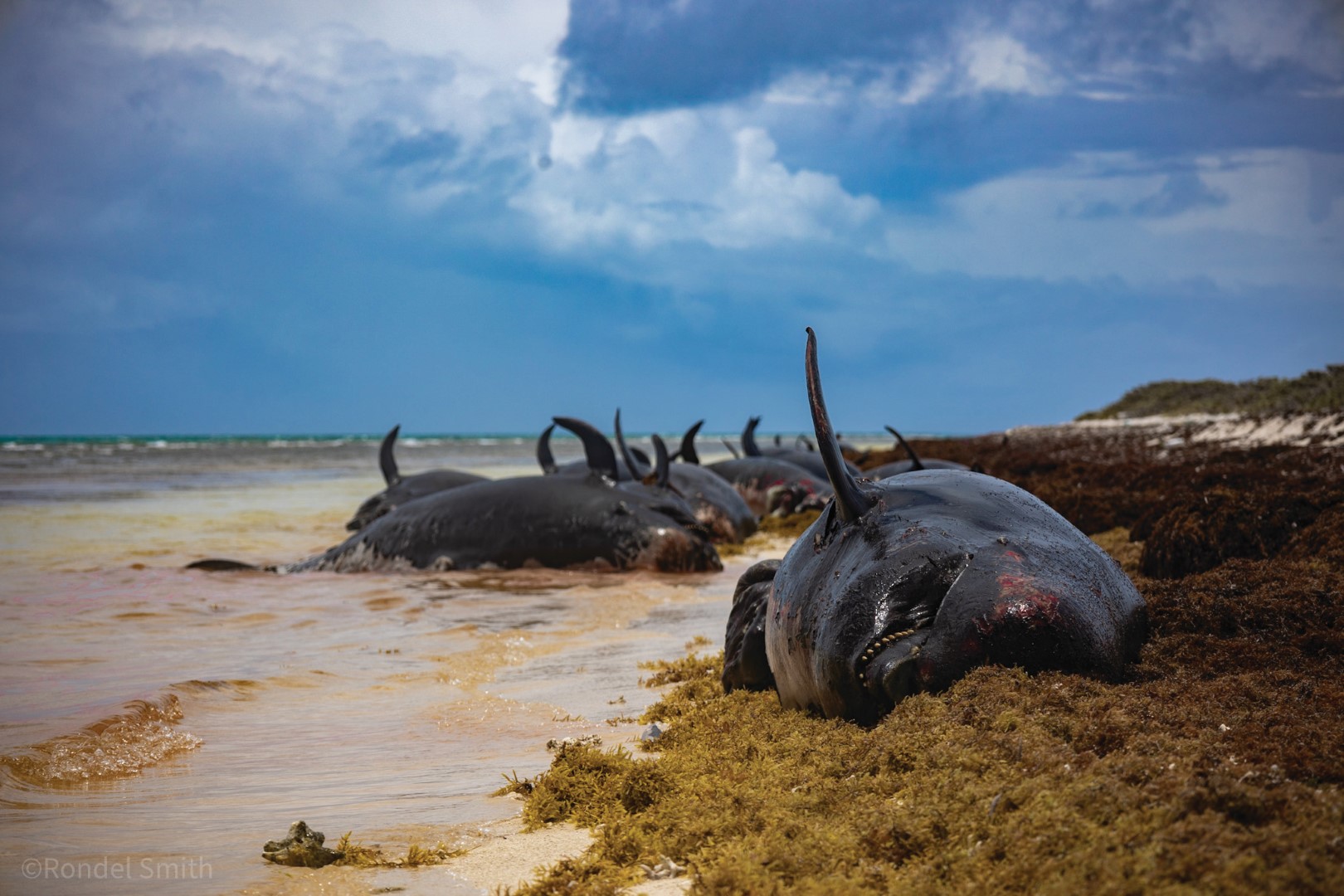 An unusual scenario,” I pondered. I vaguely recalled these species of whales were supposedly strictly pelagic species. I scan through my brain for the remaining knowledge I had of these Pilot whales and consulted Google as this occurrence seemed strange. These species are known to grow 13-15 feet in length and have a thick round head; their flippers are short and slender, and the colour is somewhere between dark brown and gray black with light gray or white patches.

The whales are known to frequent the tropical region, such as the BVI from December to May for their annual mating and breeding season. Pod sizes vary but usually contain 15-45 whales. As Google reliably informed me, these whales – unlike the bottle nose dolphins and other whales – are not very acrobatic and communicate through clicks (often loud enough to stun their prey).1

“Today was going to be an interesting day,” I whispered to myself. 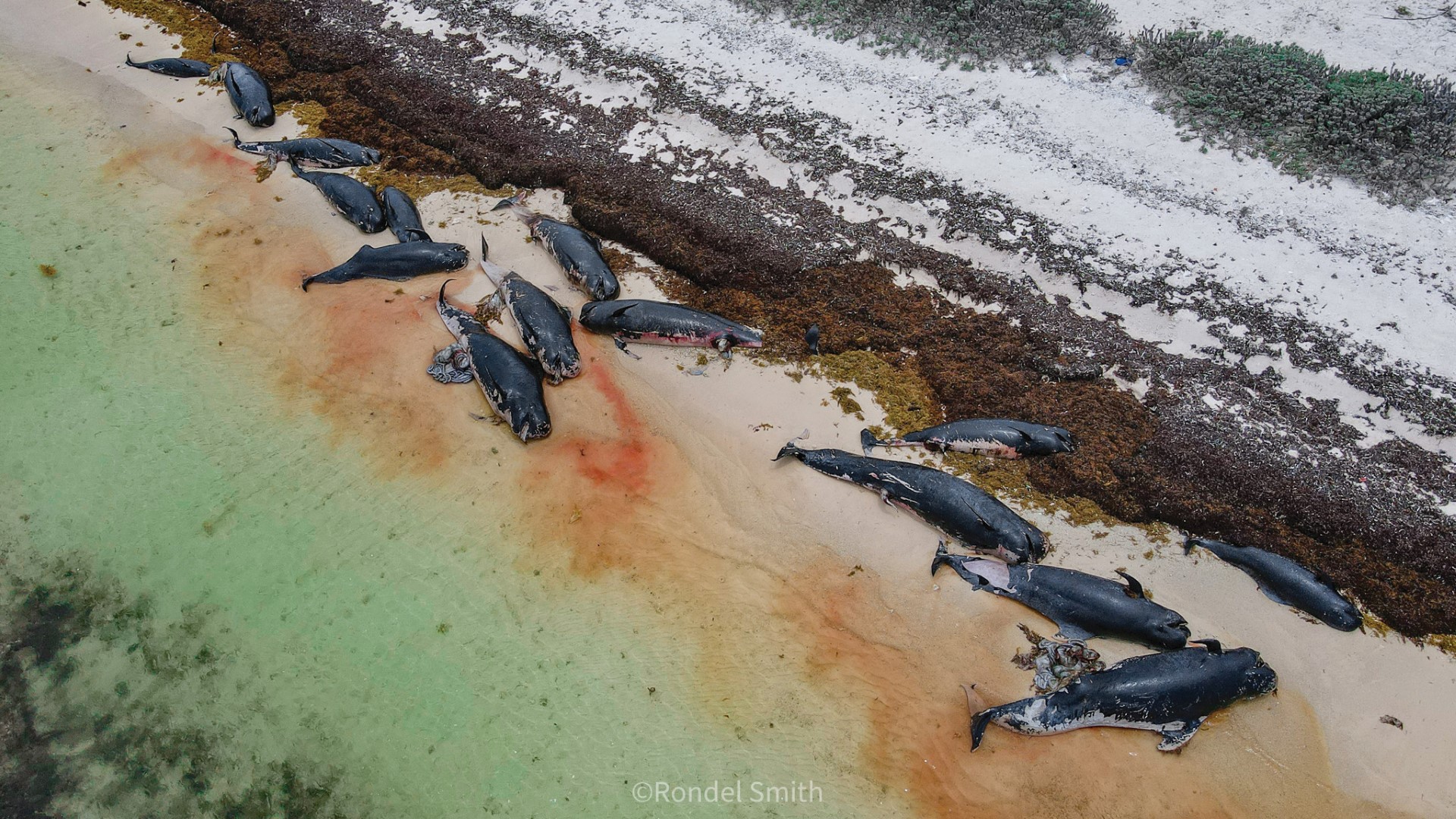 Being a local fisher and having spent an envied amount of time at sea, I have never had the opportunity to encounter these majestic marine mammals. So, understandably, I was eager to see them for myself.

On the morning of July 2 2022, my father, another adult, and I, departed the fisherman’s wharf on a small Boston whaler and made our way towards the eastern end of Anegada where, rumours had it, the whales were still located. Within five minutes of arriving, we noticed a large black mass against one of the smaller conch middens south of the island. As we got closer, the figure gradually began to take on a familiar appearance. Once we got even closer, the worst was confirmed.

Before arriving at the end of the island, we counted an additional six sparsely situated whales, all of whom had succumbed to a strange and unforgiving environment. I thought that we had passed the worst of it – that is until we finally reached the eastern end. The area unveiled the brunt of a massacre. A concentrated group of 23 dead whales along with several others were scattered along the east coast. All of them embellished with scrapes and scars which indicated a frantic struggle to navigate their way over the barrier reef. 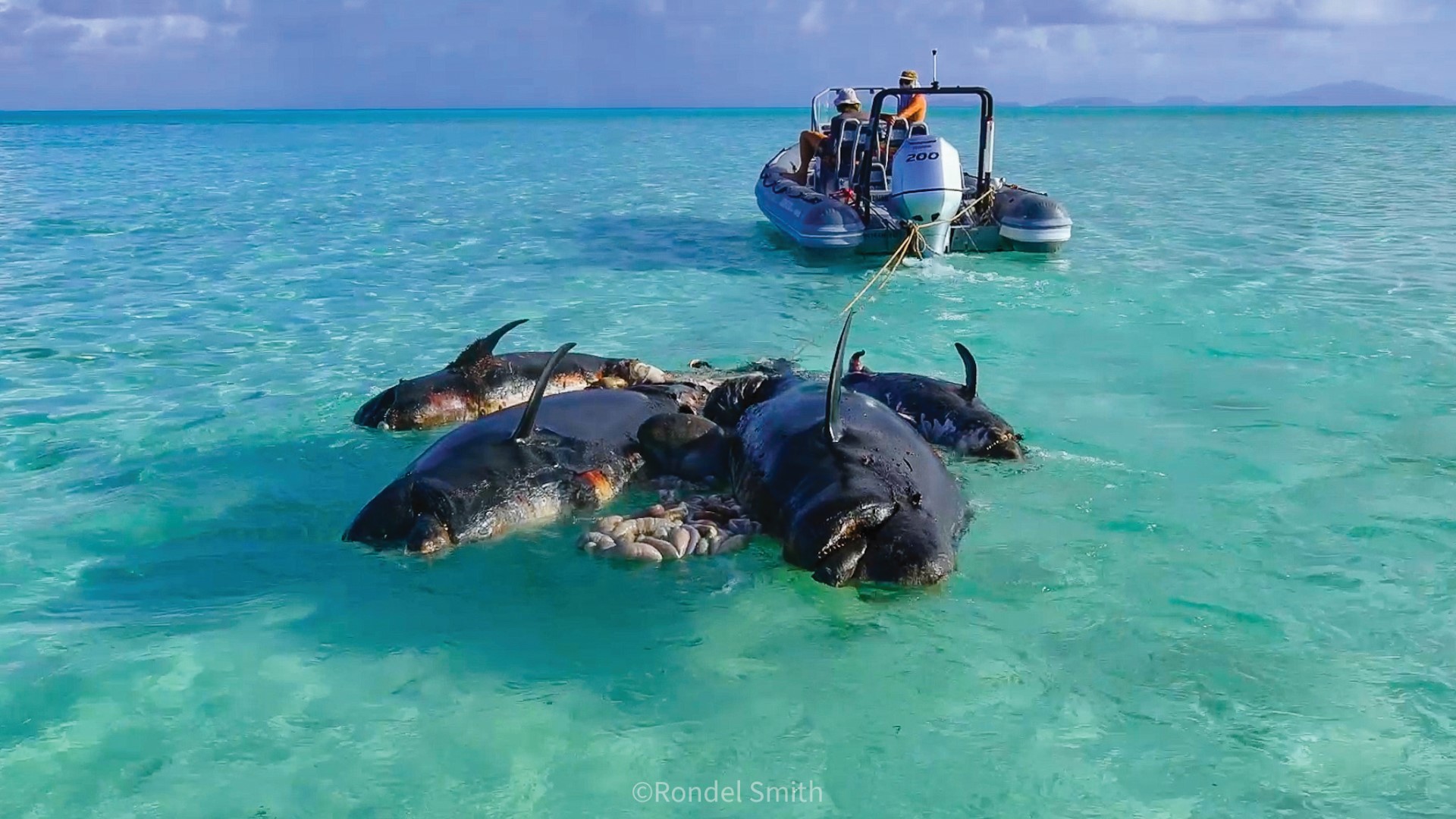 With a heavy heart, I deployed my drone and then utilized my handheld camera to document what was my first time witnessing these beautiful creatures in person. It was a confusing feeling as my emotions were all over the place. However, my eyes gazed over to a sight that cemented my grief. There was a deceased mother whale alongside her premature calf that most likely had been dispelled because of the immense stress she had undergone. We counted 46 corpses that morning.

The days that followed consisted of news sites and social media pages advertising blood-stained beaches and shark infested waters and hence the local fishermen and tour operators were advised to temporarily hold off on making their living until the corpses could be rid of to ensure everyone stayed safe. The entire weekend had passed before action could be taken as the officials and experts could only then make their way over to Anegada on the Monday morning ferry to assess and determine the best course of action in discarding the corpses.

Tour Guide operators, local fisherman and members of a local NGO “Beyond the Reef”, all came together and agreed on a set course of action that would be taken.  Other volunteers and community minded group working closely with the Ministry of Natural Resources and Labour included the BVI Rotary family, BVI Gin and Nanny Cay Chandlery. 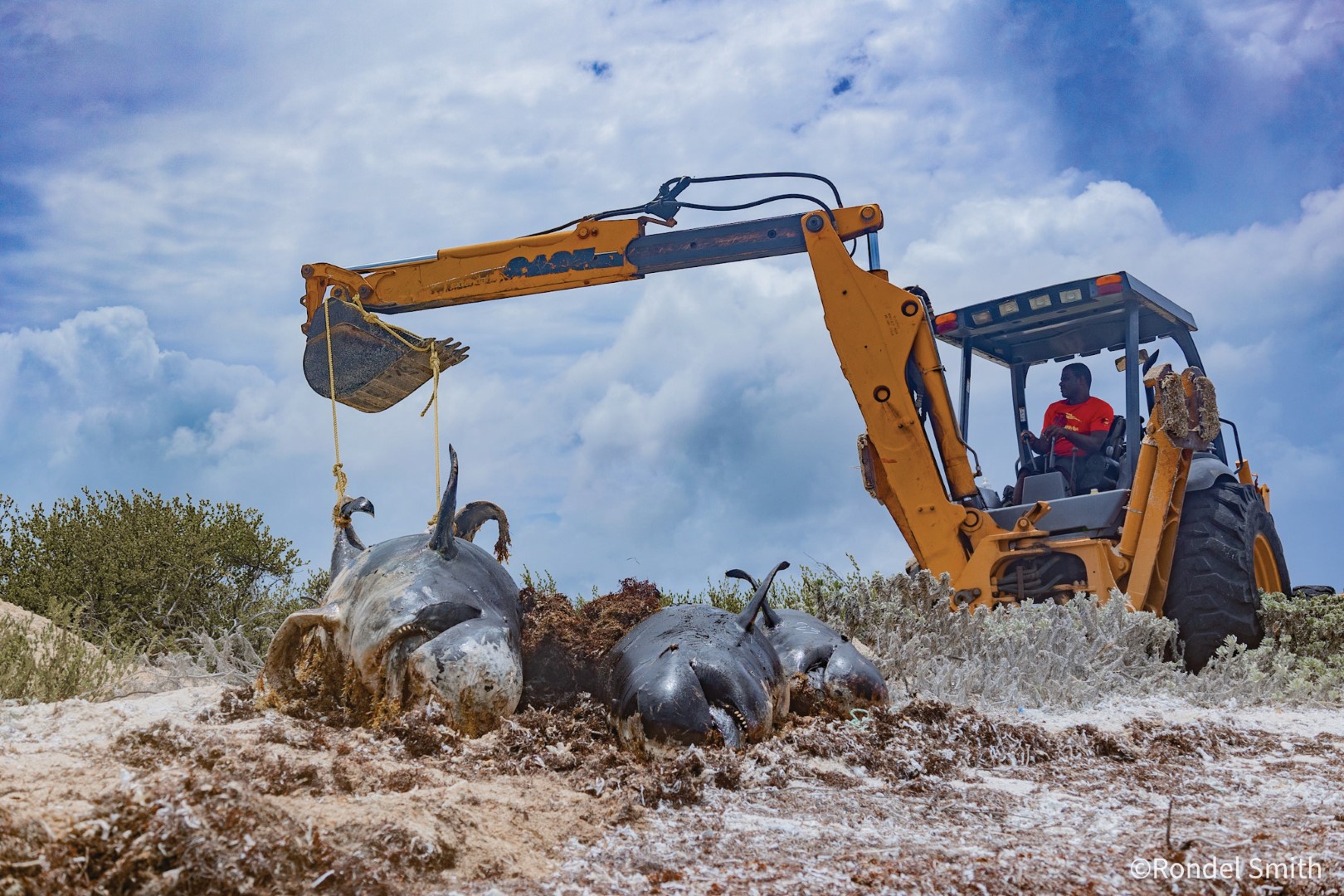 Afterwards, specialists from the Association of Reef Keepers (ARK) collected samples from the whales, we were given the green light to initiate the whale removal process. Several local fishermen came with their vessels and removed the whale corpses that were still in the water. The smaller vessels, that could maneuver through the shallow waters, dragged the corpses to the larger vessels.

I was tasked with tethering the animals by their tails, cutting a piece of rope to length, and then tying tailor-made nooses matching the whale’s size ensuring each knot kept their embrace during their departure back to the open ocean. Being wary we were operating in shark-infested waters, we proceeded until daylight became scarce.

With the whales stranded in the shallow waters addressed, the next day it was time to do something about the bodies that washed up on the beach. They were far too decomposed and fragile to be dragged out to sea because the bodies were exposed for too long in the tropical heat. Consequently, the whales were buried. That morning, a backhoe had made its way along the coast to the scene and each whale was placed into a cavity in the earth and laid to rest. From my estimation, upwards of 50 out of a pod of approximately 100 whales faced their demise in a place many people call paradise. Although the whales were out of sight, they were not out of mind. 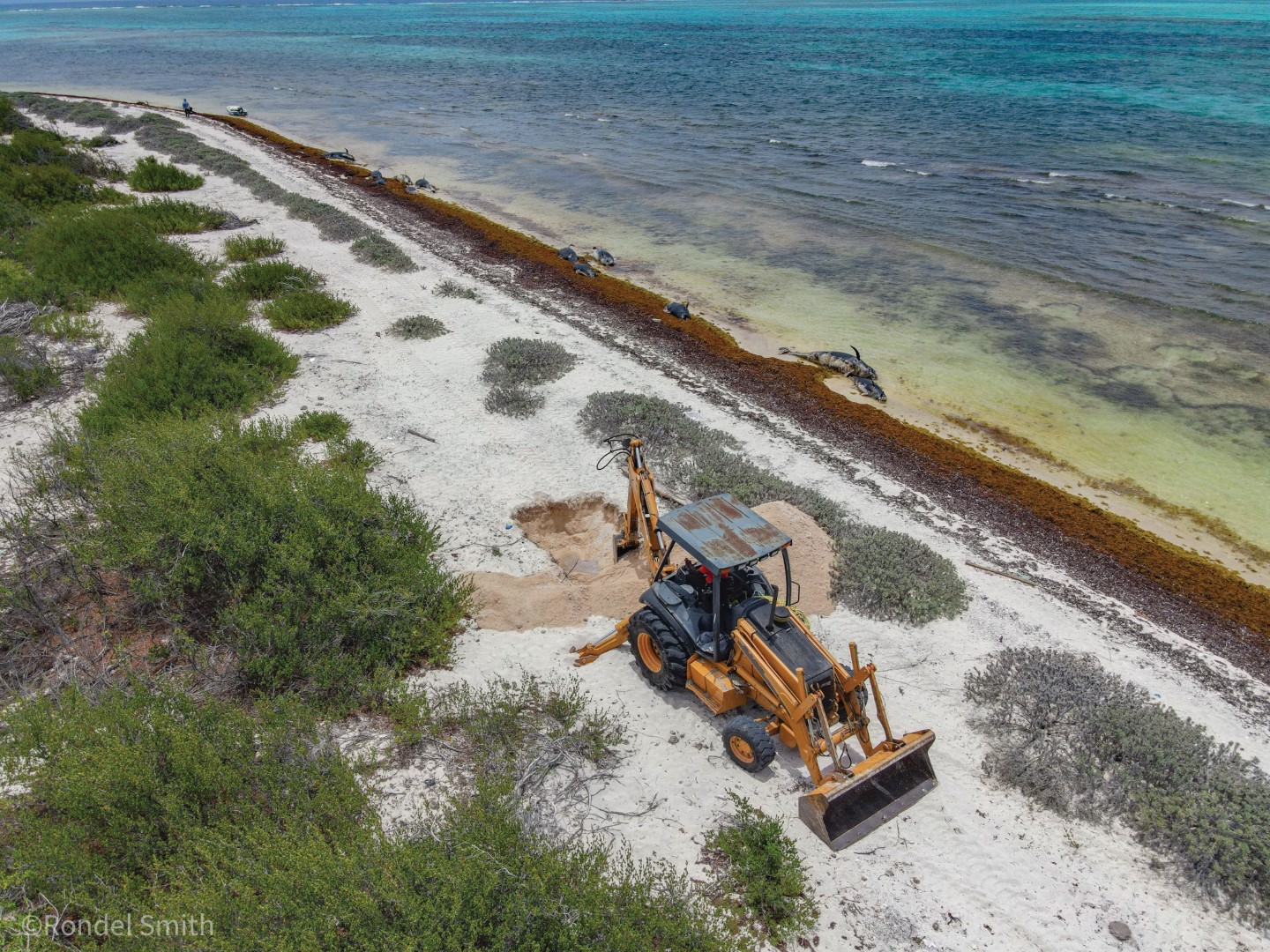 There have been several theories floating around regarding the cause of the stranding. Frequently. whales get stuck on the beach because of low tide. Others strand because of disorientation, parasitic infestation of the inner ear, or military sonar testing that cause the inner ear to bleed and or confusion of sonar signals in shallow waters.

Questions and assumptions ran rampant, “What caused it?”, “Sonar?” “Climate Change?”, but the answers remain untold.  What we do know is that Pilot Whales reside in our waters and are occasionally spotted offshore. What we also know is that Anegada has seen a Pilot Whale stranding before in the 1990’s and strangely enough, on that same coast.

The latter half of 1999 the BVI authorities reported the stranding of at least five pilot whales there.  A few weeks later, four whales were stranded in the US Virgin Islands.  Usually when a whale cries out for help, they cry out to their pods; but if they are other whales in the area and they hear it, they would then come and try to provide assistance.2

As a community we must engage in assisting the National Parks Trust and the corresponding Ministry by making a conscious effort to report sightings.  The whale watching guidelines is important information as the BVI is a breeding ground and the young calves and mothers are particularly sensitive to disturbance.

Further, the BVI is considered the sailing capital of the world so it is crucial that sailing vessels observe the following restrictions:

Meanwhile, Marine Biologist Argel Horton from the Ministry of Natural Resources explained that the samples taken by the Association of Reef Keepers will be utilized for necropsies which will hopefully give us some insight into what caused the tragedy. She mentioned that from the genetic samples collected, we would be able to learn more about the deep-water mammals that do not often venture into shallow waters. She added the Ministry will also be able to determine the gender, stomach content, age and so much more.

Moving forward, the Ministry will be organizing a local stranding network, working alongside our local NGO partners for clear and concise communication which will result in quicker mobilization of all members involved. Now, how do we report a stranding to possibly minimize this reoccurrence? Well, by keeping our eyes open and reporting when we see any unusual activities within these beautiful waters.

The Ministry of Natural Resources and Labour continues to administer the natural resources of the Territory in a manner that ensures long term sustainability and can be contacted via telephone at 468-2147 during regular hours of operation or at 468-9678 outside of regular business hours. The Ministry can also be contacted via email at nrl@gov.vg.4

It is important to state the exact location and direction to the strand site; description of the animals; number of animals involved; date and time of your observations; and condition of the animals, (alive, dead, or injured). Let us work together to keep our communities safe for humans and all the other animals that make up an important part of our daily environment.  The public is once again urged to notify the Ministry of all marine mammals that passes through the area. Be vigilant and let’s help the Ministry by being their eyes and ears.