One can easily drive through Carrot Bay on Tortola’s northwest coast, without even realizing they’re passing through a rich cultural lab. Few however, would take note of what’s really happening under their nose otherwise, as they pass by. Besides evidence of fishing, agriculture, farming and the making of traditional cultural beverages, are hidden treasures tucked away off the main thoroughfare. The sleepy village typically comes alive in August during the Carrot Bay Cultural Fiesta, displaying its rich cultural traditions.

When my cousin Linda Leonard called asking if I was the one enquiring about ovens in Carrot Bay, my ears perked up.

“Well, I went around the village and found about 12 or 13 ovens,” she enlightened me and before her final words were spoken, I requested a time when I could get a tour of the village’s outdoor ovens.  Meeting and speaking with at least two old time bakers was top of the list for this highly anticipated excursion.

Two days later, I made my way to Carrot Bay with bubbling excitement.  Such a treat needed to be shares and as such, I packed my family in the pickup and off we went.

A very resourceful Linda was ready and awaiting my arrival.  She presented me with a list showing me a paper with 13 different names she had unearthed for our tour and instructed me where to drive—in areas nested off the main artery—where you really got to see the true Carrot Bay.

By time our tour had ended, I’d seen 15 different outdoor ovens of varying sizes in varying stages of condition, reflecting a rich historical area of baking in the community. I let my mind wander as I envisaged the aroma coming from ovens filled with hot breads, tarts and cakes they used to bake. 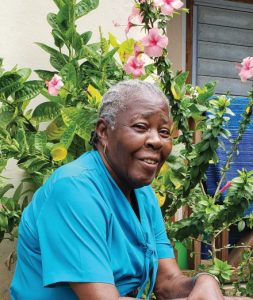 Iona Dawson now retired, said she wasn’t a baker but learned to bake growing up with her aunt and prominent educator Isabella Morris, who had the primary school at the foot of Windy Hill, named in her honor.

“I had to help with the oven. In those days, you had to,” Dawson who started out as she hit her teens reflected. “You had to help put wood in the oven, make it up and heat the bread to bake. When Saturday came, you had to get the oven ready for the bead. During the week, the men would go to work in the hills planting and then go fishing on Saturday. The ladies stayed home, did the baking, cleaning and washing. You had to have all those things already done when the men came to help clean the fish.”

As she got older, Dawson moved back to live with her mother who also had an oven and they baked all the time. “I’m not too much of a tart maker,” she noted. “It was easier to make bread than tart. People used to put their bread in a tray and go selling door to door in the community.”

Backyard ovens, visible in the inner sanctums of the community, were constructed from a combination of rocks, bricks and concrete. One of the most important things about an outdoor oven is having it covered to prevent weather from destroying it, especially if it rains after baking. The concrete expands in the process of cooling.

“They tend to crack up, that’s why I haven’t used mine in a while,” Dawson said, though it has been refurbished to pristine condition following Hurricane Irma. “The covering helps keep the water from going on the oven itself, because when you light it, the heat with the water that falls on it, cracks it up.” 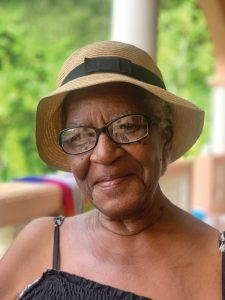 Lyra Parsons, another retired baker, recalled learning to bake from observing her grandmother, then took up where she left off after she died. She remembers using dry coconut palms and wood to heat up the oven. As the oven heats up, the roof of the oven with the bricks gets white and the bottom as well, she pointed out.

“That’s when you know the oven is hot,” Parsons said. “There’s an ash pit on the right side. You sweep out all the ashes and burnt wood, then you put in your bread and whatever else you have to put in and closed it up.”

During the process, the bread is checked to see how they’re coming along. If they’re turning black, then the oven is too hot. Parsons said the bread is taken out to cool off before putting them back in.

Besides bread—coconut was her specialty—Parsons made guava, coconut and pineapple tarts. “People’s favorites were coconut and guava,” she noted and she wasn’t one to measure the ingredients she used.

Both Dawson and Parsons said many persons within the Carrot Bay community baked for their own personal use. Parsons, however, used to sell bread and made items for the church’s harvest and there were persons in East End who ordered her goods.

“I baked tarts and potato pudding along with bread and coconut bread,” recalled Parsons whose oven held over 20 tarts.

What patrons said about her coconut bread?

“They were awesome,” she said with robust laughter. “I baked coconut bread to sell in the church during harvest and people were crazy about them. During Christmas, I didn’t have enough hands to bake. People ordered a lot. Some people ordered up to 12 tarts. People even ordered from St. Thomas. My tarts event went to the United States.”

The trip to Carrot Bay was definitely worth it.  I learned about the history of bread and tart baking in outdoor ovens from two seasoned “bakers”.  This heritage is one that needs to be passed on to the next generation as not to lose this part of our BVI culture.

Derelicts of a Baking Culture

Previous Article
Let’s Taco Bout It! Tradewinds Bar & Grill
Next Article
Beauty behind the Model with Mollee Donovan – From BVI to London