The Pottery Garden Is an Experience 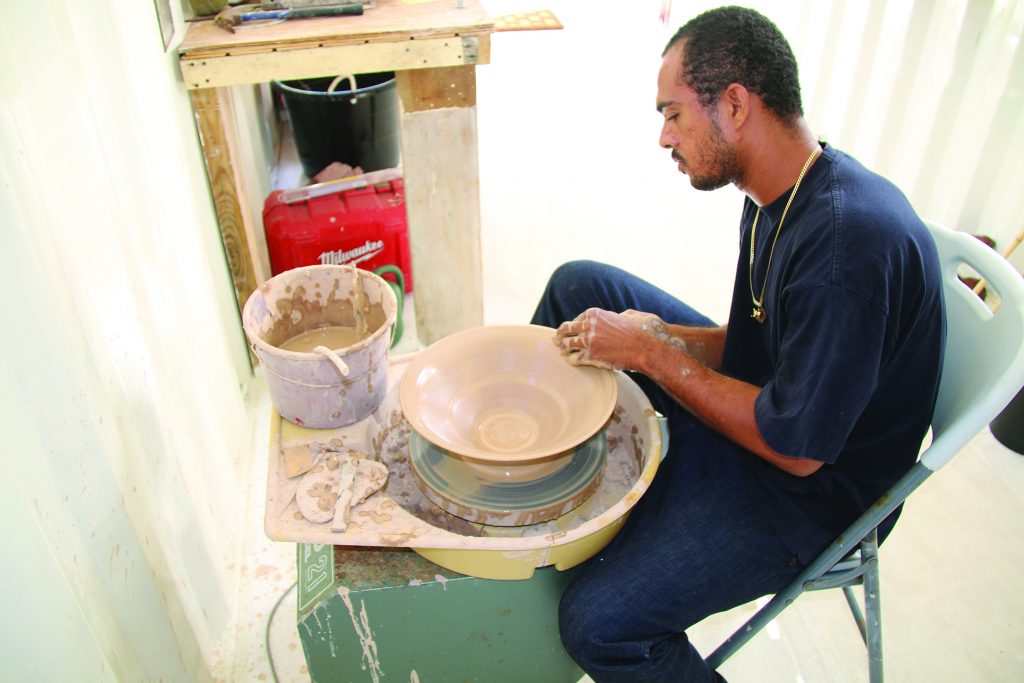 by Angela U Burns

Thirty-one-year-old BVIslander Karl Burnett loves the earth and, in particular, its features and products – nature. His passion is quite evident when you talk to him or visit The Pottery Garden.

It’s a new business that officially opened in Josiah’s Bay, Tortola on March 9, 2019, and one that is destined to become a major attraction for visitors and locals alike.

Karl has a fondness for pottery that is as strong as his determination to succeed in life doing what he loves.

He recalls his days at the then BVI High School in 2002 where he was first formally introduced to pottery, as he majored in Arts and Ceramics. “I immediately fell in love,” he said.  He noted that while he was the only one in 5th form doing finals in advanced ceramics, several other students spent time watching him as he worked. He, therefore, realized that a lot of people liked to see the process of making pottery.

Karl recounted that at the time, he was just doing hand building as there was no teacher who knew the Potter’s Wheel until his last term in 2004. But that didn’t stop him from honing his skills at home.

What’s more, his father was an artist and still had some clay left in the house, so he would do hand building and take his pottery to get fired at Aragon’s Studio. He also spent a lot of time in observation at Bamboushay.

After leaving high school, his family, recognizing his passion and talent, bought him some clay, a Potter’s Wheel and an electric kiln or pottery oven, which when fired up to temperatures of 650 degrees Celsius or more, changes clay into ceramic.

A super excited Karl plunged right into the learning process. “I did a whole bunch of practicing at home for many years, a lot of reading, some research online and more and more practicing,” he related.

He recalled that during his high school days, he built a small crude gas-fired kiln in his mother’s yard, but that wasn’t very successful as he didn’t have much experience.  After leaving high school, Karl worked on developing his own blazing, that coating over the body of the clay. “Through nuff trial and error, I developed a few on my own.”

This young home-grown potter said he always knew he wanted to make a living doing pottery, but was conscious of the fact that it would be difficult because of the small market here.  So, he decided to pursue the art as a hobby while working other jobs, mainly telecoms.

Around 2013/14, this nagging love for pottery got Karl back into practicing a lot more often and he decided to work on making this a full-time venture. So at one point when he was unemployed, he went about selling his works out of his vehicle.

“After doing that for about a year, I decided I wanted to do it more full time,” he declared. “So I decided to conceptualize a business idea where I can do what I love, sell it and make a living.”

He began working on building a proper display gallery or studio where he could make the pots and the dream become a reality, he spent the first day in his workshop on March 12. This was quite a labour of love for Karl, starting in 2013/2014. He used all of his spare time and savings and also his talents to achieve this milestone.

Hurricane Irma was not mindful of this when she ravaged the islands in September 2017 and Karl, who was very close to opening up, had to start all over again. But he persevered.

In addition to the setback caused by natural disasters, animals, in particular cows, had a run of the gardens on many occasions, stunting the growth of his trees and plants. Not to be daunted, he erected a fence.

What you see when you visit The Pottery Gallery is a vast improvement from the small tucked away spaces Karl worked in at his mother’s or grandmother’s houses. The new workspace gives him the freedom to be more creative and mass produce his pottery.

The entire area includes a workshop studio where the pottery is made. The centre piece of the ground is a massive kiln and then there is a separate building for the display studio, which is quite traditional, built as it is with wooden shutters.

The Pottery Garden, resplendent with nature, is also adorned with various trees, flowering and ornamental plants and tools of the trade, including his first wood kiln.

“The concept of the garden…I wanted to create an entire experience,” said Karl. “I want someone to take away the feeling that they just went somewhere naturally made from the earth. So it’s not just pottery, it’s an experience. It’s somewhere to come to not only look at pottery, but also enlighten the senses and embrace nature, with the butterflies and even the occasional iguana.”

No wonder the slogan for The Pottery Garden is “An earth made experience”.  Karl said the studio is almost always open and everyone is invited to come on down. He describes the pottery he makes as very much the earthy type.

The wood kiln hasn’t been fired up yet, but when it is later this year, one can expect to see lots of decorative and functional pieces or sets. These would include bowls, cups, jugs, platters, citrus squeezers, candle holders and incense burners and some artistic stuff like vases, trays, plates, etc.

For now, he is busy working on some one-off pieces using stoneware clay and his electric kiln. He does have another small kiln to be used for raku pottery. Learn more about this and other aspects when you visit.

Karl says the intention is for The Pottery Garden to become a premier visitor attraction in the BVI.  He envisages welcoming in particular cruise ship passengers who would come through as part of their scenic island tour. They would be able to tour the Pottery Garden, watch him work, get an explanation of the process and even pinch or hand build something themselves or buy a piece from the gallery to take back with them as a memento of their trip.  He is working with the BVI Ports Authority and the BVI Tourist Board to develop this concept.

Karl credits his wife who he refers to in this case as his apprentice. Cristal plays a major role in making and decorating some of the pieces.

The Pottery Garden is open. So be sure to visit. Find them just before you head all the way into Josiah’s Bay beach. There are directional signs.