The Latent Power of The Miss BVI Crown

Since the emancipation of slavery, the British Virgin Islands has shared significant moments in history during the first August Monday, Tuesday and Wednesday of each year.  For years, the fete on the field provided various entertainment for the populace.  However, the coronation of Her Majesty Queen Elizabeth in 1953 was one of the factors that influenced the beginning of Festival in the Virgin Islands.

During the first August Festival held in Road Town in 1954, the Festival Committee with all pomp and circumstance, decided to have a festival queen. The festival queen was selected and crowned based on selling the highest votes or tickets and Miss Ivy Chinnery of Jost Van Dyke became the first official queen of the BVI.  68 Years of Pageantry is now in our blood and during that time we have had a sleuth of pageants which are listed: Miss Valentine, Mother and Daughter, Miss Hal Jackson Talented Teen, Miss Teen BVI, Mr. G.Q, Ms. Earth BVI, Ms. Gorgeous, Mrs. BVI, Miss World BVI, Miss Universe BVI, Mr. and Miss Fifth Form, Mr. and Miss HLSCC, Mr. and Miss Junior BVI, Prince and Princess, Miss Easter Festival, Miss East End/Long Look and Miss BVI.

Of all of these pageants, the Miss BVI is the cream of the crop of pageants – the official ambassador, being under the auspices of the Virgin Islands Festivals and Fairs Committee, which is subsidized by the Government. 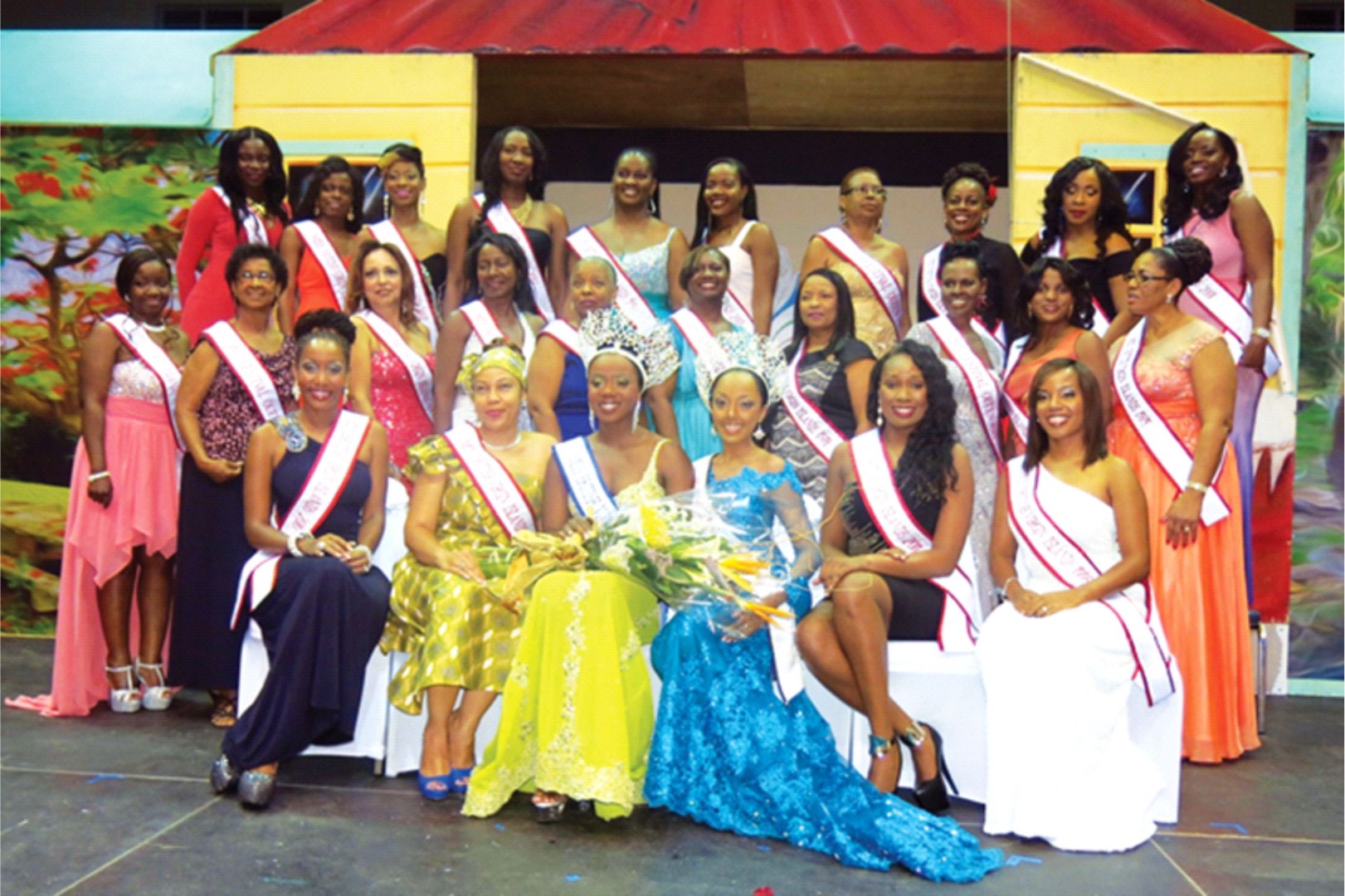 Leadership for the festival started with the Anglican and Methodist Churches who would take turns to orchestrate the events.  Another set of volunteers, the Jaycees and the Festival Committee 1975 Limited also assisted before it was formally turned over to the Virgin Islands Festivals and Fairs Committee.  Back in 1966, when the Jaycees were in charge, the criteria in which to select the festival queen was changed to include judging by 3 impartial judges.  The categories included 1) beauty, charm and personality; 2) Demonstration of talent; and 3) simple quiz of three questions pertaining to history or geography of the BVI.  This procedure is still in use today, with a few variations in the categories.  As the years progressed and under the influence of other regional and international pageants, in 1975, the title of Festival Queen was changed to Miss BVI; with Miss Irene Penn winning the coveted title.

In 1998, under the guidance of Mrs. Eileene Parsons, the then Minister of Education and Culture, festival was brought under the Government proper and the name of the committee was changed to  Virgin Islands Festivals and Fairs Committee, which is still in effect today.

As Pageantry evolved, we saw history being made.  Bria Smith served from 2019 to 2020; and 2020 to 2021 because of the several lockdown of the country due to COVID-19. For 2022, there were only coronations for the Miss BVI and Mr. and Miss Junior BVI due to time and financial constraints. Miss Jareena Penn, first runner up for the 2021 Miss BVI Pageant was coronated as the 2022 Miss BVI. This was not the first coronation of Miss BVI however; as in 2018, Ms. A’yana K. Phillips, one of 2017’s first runner-ups was the first coronated queen.

Brin, one of the former committee chairs has hailed the pageant as “the core of our Festival Celebration. The pageant is our pride, heritage and part of the fabric of BVI culture; one of our most prestigious events that must at all times be preserved as it is our legacy,” She has explained that the pageant is one of the many avenues to instill this sense of pride in our young women.1 Hodge-Smith, Current Advisor of the Miss BVI Committee concurs and expressed that “the Miss BVI pageant is a significant part of our history and must be carried on for generations to come.

The Miss BVI Pageant has given significant status to women within our community and they are now seen in all facets of business at various levels in our society; not just our Queens, but every participant who ever vied for that coveted title.

The emancipation festival celebrations is hailed as a tourism product and is very meaningful.  It is held during our slow tourism period as November to May is our regular tourism months.  We are in fierce competition with other countries in the region that are having festival at the same time and we get a chance to share an extraordinary gift, the culture of these islands.

Other ambassadors include our well esteemed group of athletes who has put us on the world stage.   When these athletes compete, persons around the world who didn’t know that the British Virgin Islands existed now speak with familiarity of our sport heroes.  These athletes are now getting well deserved press time for their commitment and discipline to their craft.  There is an ongoing debate and a call out by former athletes and sports reporters on the Government as to how serious they are about our athletes.  Shouldn’t there also be a call out to the Government and the Community at large, as to how serious we are about raising a Miss BVI from the ashes of the local Miss BVI Platform that can travel and represent the territory regionally and internationally? The Miss BVI is also an ambassador; just like we recognize our athletes for their ambassadorial roles.  According to the Meriam Webster Dictionary, an ambassador is 1.) a diplomatic agent of the highest rank accredited to a foreign government or sovereign as the resident representative of his or her own government or sovereign or appointed for a special and often temporary diplomatic assignment; 2.) an authorized representative or messenger or 3.) Unofficial representative traveling abroad as ambassadors of goodwill.  All eyes are clued to the television, when a young lady is chosen to represent the BVI in these pageants, here she is standing amongst some of the most educated, talented women in the world.  She must not only be able to speak about her goals and aspirations, she is expected to perform and paint a picture of the BVI that will open our borders to numerous visitors from around the world. Her knowledge of our culture and the dreams and aspirations of the people must be communicated eloquently.

So what is the Miss BVI brand?  When our ladies are on the world stage, what does it say about the people of the BVI?  Can we ponder exactly what our investment should be for this type of tourism to ensure that our participation is not just so that people realize there is actually a place called the BVI and it is located in the Caribbean, but that it has the potential to raise that caliber of women from amongst its small population?

The festival budget is one that is heavily scrutinized, as it is one pot that has to be shared between several activities, the Miss BVI show being one of them.  The cost to organize a successful pageant is approximately $50,000 to $80,000.3 Money, is a necessity in pageantry and even the employment of a coach and wardrobe selection bears this out.  Because of the extensive amount of hours of preparation required, these coaching fees quickly add up and one only need to take a look at the display of beautiful gowns in the evening wear segment to begin to realize it is an investment.  Let’s not forget that all the other segments are tied to wardrobe finance as well.  The cultural costume carries 90 points; the BVI Promotion Segment also 90 points; Talent category 100 points; and the Personal Interview and Professional Attire 150 points.  The Question and Answer Segment while not focusing on attire, carries 90 points, but of course you must be immaculate.  The application packet for Miss BVI is very clear that the contestant must dress attractively at all times.

Thankfully a lot of ladies who actually reach the stage has had this aspiration from a young age and so throughout their teenage years would also have garnered some of the other attributes required.  The mental acumen as contestants are put to the test through the committed practices required;  even the task of learning to walk in back-breaking stilettos.   It cannot be understated that this young lady’s whole upbringing would need to include an exercise regime and diet plan. Those of us on the health trail, knows that the budget of a wholesome plate most families cannot afford, and we always figure that growing children just need to have their bellies full.  Thankfully, the swimwear segment outside of the introduction carries the lowest marks; i.e. 50 points. It takes will power and motivation for our young contenders to remain focused.4

There has been visits to schools for the purpose of educating young women on the Miss BVI Committee’s mission to evolve their sense of pride, beauty, and culture.  Though these girls would not be of age, it was thought important to get them thinking about these types of opportunities that give them a chance to work on building their confidence, being empowered, and learning about social responsibilities.

Sacrifices become an everyday occurrence as Miss BVI contestants begin their preparation. We have mentioned membership in their chosen gym, but there are also etiquette classes and speech sessions with the Tortola Toastmasters Club.    Their ambassadorial role is expounded on by the committee while working with each contestant to bring them closer to self-actualization. Preparations also include keeping abreast of the news, mock interviews, and sometimes late nights especially if the contestant is from one of the sister islands.5 How can we ensure continuity so that plans made the Virgin Islands Festivals and Fairs Committee can come to fruition?  How do we ensure adequate funding and support for these ambassadors?

Marketing of any tourism product is key.  The pages that advertise the Miss BVI show as part of our emancipation celebrations should be constant with information that brings people repeatedly to the page not just during the months before the show.  The BVI is currently challenged with teenage pregnancies, female delinquencies, with the numbers on the rise of drug offenders and motor cycle victims.  Pageantry is at its liveliest when festival is approaching.  Even when the Queen is asked to come and cut a ribbon or draw a raffle ticket, the opportunity must be used to further her and the Miss BVI Committee’s platforms so that the little girl eating her snow cone may pause and say “I want to be just like her when I grow up”.  The former queens and other contestants will tell you how much the experience has changed their lives, but these conversations are few and in between.  Most times, the platforms that are chosen even by the reigning queen does not get adequate support by the community.  International reach with respect to that platform should be sought and there should be some tangible gain before that reign is over, or we are just playing lip service to this tourism product. With the increase in personal sacrifice that is required, as a country we should take good care of our title holders as we do our athletes.   The educational scholarship and car should always be a part of the prize.  The car should even carry the logo of the Miss BVI Committee so even as it passes a young girl on the street she sees the possibility of being an ambassador, of becoming a tourism product for her country.  Social obligations locally and internationally should be welcomed and practiced so that persons understand we take this role seriously.  There is a lot of power in this crown if it is truly marketed and invested in.