Where To Go
Tags: The Baths

The BVIs’ Natural Wonder: ‘The Baths’

There are few places on earth that are quite so stunningly beautiful, quite so awe inspiring as the Baths on Virgin Gorda’s south-west point. On a stretch of coastline that runs for about a mile it’s almost as if a giant has sprinkled boulders randomly onto a white sand beach and some rolled to a stop near the water while others piled high, some balanced precariously one on top the other, and yet others cracked on impact. In reality there is a geological answer to the spectacular formations of the Baths

The origin of the boulders has been the topic of speculation for years. The boulders were not hurled up onto the beach by a mighty storm; they were not disgorged by a volcano or carried here by a glacier of a long-gone Ice Age. The boulders and the wonderful natural sculptures they form are due to tumultuous geologic processes and weathering that occurred over eons of time.

Geologists believe the origin of the boulders occurred about 50 million years ago (give or take a few hundred thousand) when molten rock known as magma pushed its way upwards, cooled and solidified forming large slabs of mineral rich granite. This became exposed due to faulting and uplifting of the sea floor and today large parts of Virgin Gorda are composed entirely of granite

So how do you get boulders from slabs? The answer is that when the molten rock solidifies, it cools and on cooling it shrinks and cracks. At the Baths there are some great examples of unusually shaped cracked boulders. The rest of the story, which entails the formation of the natural sculptures, can be attributed to the process of weathering – over millions of years.

‘The Baths’ is undoubtedly the most popular attraction in the BVI and in order to explore it in depth at least two days are necessary. Many sailors, though, find that a few hours are enough to catch a glimpse of this natural wonder.  A dinghy is a useful companion for exploring the water’s edge because the trail does not always follow the coast.

For those on a yachting vacation the fee to visit the Baths is included in your national park permit provided by the charter company base. Tie up to one of the red mooring balls just offshore. Then dinghy in and tie up at the special line provided and swim in to the beach. The trail, the Devils’ Bay Trail, through the boulders is well marked and ropes, steps and walkways have been installed to make your excursion easy. On busy days the trail becomes one-way only to avoid traffic jams.

The entrance is at the southern end of the beach. Enter by crawling through a narrow cleft between two boulders and you come to the main cavern with a large pool of clear seawater. From here on, the more difficult parts of the trail have been fitted with handholds and strong wooden platforms and ladders. Along this section of the trail you will see some good examples of hollow boulders, the most spectacular being Neptune’s Hideaway. After the main cavern go up the slippery sloping rock with the help of a rope to hang on to. At the next ladder up look back and there it is: incredible, with a hole right through it.

As you approach Devil’s Bay look out for The Anvil, an impossibly balanced rock that looks like it would topple at the faintest touch… and it’s been there for 50 million years!! It is surrounded by crystal clear turquoise water and is a great snorkeling spot. Further on there is a great photo op. Look out to the anchorage through a triangular shaped aperture formed by three converging boulders. If a classic yacht is in the right place you’ve got a prize-winning picture.

Devil’s Bay is picture perfect and suddenly; there it is. The turquoise water is flat calm with excellent snorkeling around the perimeter of the bay – or just wade in for a cooling dip.

Other plant species you will notice on the trail are the pungent wild sage, frangipani, wild jasmine and the odd turpentine or tourist tree, so called because of its red peeling skin. Much of the island’s fauna can be seen on this wonderful nature reserve. You will undoubtedly see geckoes and lizards of all shapes and sizes; the anoles are easily spotted, with their bright red expanding throats, if they’re courting. A shiny brown snake may slither by – but don’t be alarmed it’s harmless. The Zenaida or turtledove is common in this area with its haunting “oooh, oooh.”  Wheeling overhead frigate birds may be seen and last time I walked this trail I spotted some of the less common, raven-like black anis.

You may be surprised to see a whelk scuttling up the path. On close examination, though, you will see that in fact the whelk shell has been inhabited by a hermit crab, which has scavenged the shell and now uses it as a temporary residence.

At the Top of the Baths, the place where land-based visitors begin their walking tour, there’s a small restaurant with a fresh-water pool and several shops. The lookout offers spectacular views over the boulders and down the Sir Francis Drake Channel with Tortola in the distance. Nearby is the famous Mad Dogs island bar and café. 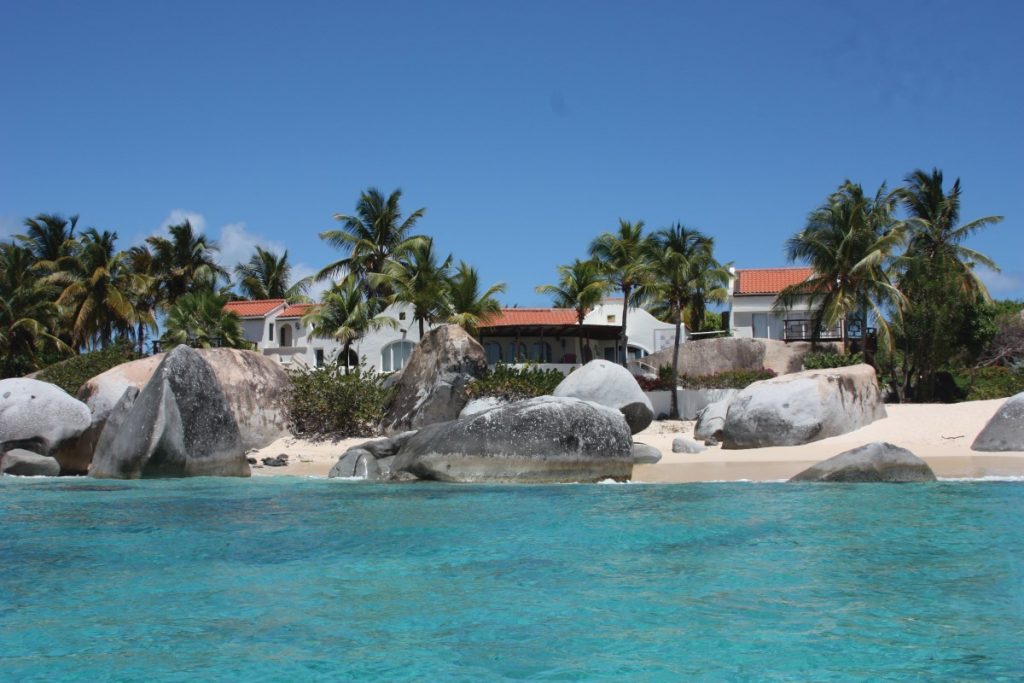 The area of the Baths and its adjacent beaches of Spring Bay, the Crawl, Little Trunk and Valley Trunk Bay provide unique snorkeling. The underwater boulders make for plentiful caves, hideaways and grottoes perfect for marine habitats. Corals and marine organisms that attach to rounded boulders present a very different seascape unique to the Caribbean.

The Crawl at the end of Spring Bay is perfect for a protected swim and as a pool for rock jumping. It’s not very deep but is perfectly calm. The name is derived from Corral, where in times-gone-by and before refrigeration it was used as a pen to keep fish. The Crawl has a separate access – it cannot be reached from the Baths, but by dinghy or separate trail from the road. It is so stunningly beautiful and makes a perfect playground for youngsters. There’s an area for barbecuing too.

Further up the coast towards Spanish Town is Valley Trunk Bay, commonly called Brochure Beach. The palm lined sandy strip is often used for yachting advertisements. The offshore area is sometimes used for anchoring when the mooring balls are all taken at the Baths. It’s within easy dinghy reach to that world-renowned destination. However crowded it is be sure not to miss it – it’ll be the highlight of your BVI adventure.

Tags:
Previous Article
An Honest Look at Spending Time with God (and how to do it)
Next Article
David Carson: Another Last Tourist