Residents of Anegada advised to evacuate as Irma looms

His Excellency the Governor Mr. Augustus Jaspert has sought to admonish residents of the 10-mile-long-2.5-mile- wide island of Anegada, to take precautionary measures ahead of the impending Hurricane Irma that is forecast to be a major Category 3 Hurricane and evacuate.
In his statement released moments ago, today Monday 4th September 2017, His Excellency Jaspert said the Government will be facilitating the evacuation process.
The Territory is presently on Hurricane Watch as per the 11 am advisory from the Antigua and Barbuda Meteorological Services which means that hurricane conditions are possible within 48 hours. Strengthening is likely as the system moves westward, which according to the forecasters’ latest track, the center of Irma may pass very near or over the northern Leeward Islands and the BVI and approximately 35 miles north east of Road Town near Anegada. 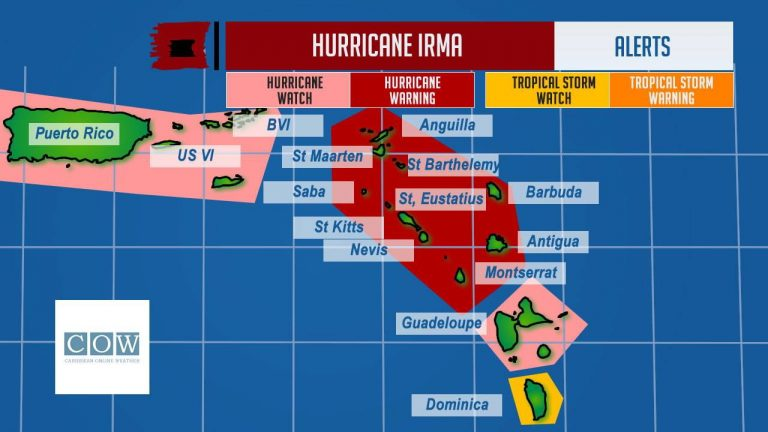 H. E the Governor noted that considering Anegada’s topography and vulnerability to storm surges and the predicted wave heights, “we are concerned about the impacts that this system may have on this island and we will initiate appropriate actions to support the residents”.
He continued, “At this point, we advise residents of Anegada to consider leaving the island and to find a safe shelter with family and friends. We will be making provisions to support this move and further details will be issued.”
Precautionary measures are being taken
He also mentioned that the authorities will be undertaking all necessary precautions to safeguard the people of the Territory, analyzing all the forecasts and they are making decisions in the people and the Territory’s best interest.
An emergency meeting was held earlier he added, with the Premier Dr. D. Orlando Smith, along with the National Disaster Management Council (NDMC) with key agencies, ministries, and departments to review the forecasts and discuss the BVI’s contingency and action plans. Among things discussed was the readiness of the emergency services, government and key sector agencies.
“We have fully activated the disaster response mechanism; all key players are fully on board and all critical assets are being secured to ensure that we have the ability to initiate an immediate response following the impact,” he said.
Following this meeting, the National Emergency Operations Centre (NEOC) was activated at 12 noon today, 4th September and they will provide a central point for the coordination of response actions.
Government Offices closed early today
All government offices will be closed from 4.30pm today to allow public officers additional time to finalize their preparations. However, the statement continued, essential workers who would be needed will be contacted by their Heads of the department to finalize Government’s preparations.
Be Prepared
He also urged residents to take the time off to be ready by finalizing all hurricane preparations and keep abreast with updates from the local authorities.
Meantime His Excellency the Premier of the BVI, Hon. Dr. D. Orlando Smith OBE also urged persons to be equipped and remarked that he was pleased with the level of readiness from the various departments and agencies of the government ahead of the hurricane.
Premier pleased with level of readiness
“Today, I co-chaired a meeting of the National Disaster Management Council (NDMC) with the Governor. I was pleased to receive reports about our state of readiness from the various departments and agencies. Our emergency services are ready, our utility services have escalated their preparations and have placed their response mechanisms on standby and our special attention has been given to clearing ghuts and drains throughout the Territory,” he remarked. “We are doing all that we can to ensure that information is getting to vulnerable communities and I urge you to act on these. Our response and recovery mechanisms are ready. I implore individuals, families, business, and mariners to make use of the time available now to secure your homes, businesses, boats and your property.”
Schools reopening to be further delayed
The Hon. Premier also mentioned that the Ministry of Education and Culture made the decision earlier not to reopen schools as originally scheduled, without saying exactly when it will be pushed back to. He, however, noted that the private schools that are opened should review their plans and determine when it is best to close.
A meeting is scheduled to take place later today with Cabinet will focus on the continued preparations he said. “Our resilience in the aftermath of Hurricane Irma will strongly depend on how prepared we are and I’m sure you will all agree that we want to minimise and avoid loss and be able to recover quickly from any impacts that Hurricane Irma may cause,” he stated. “We, therefore, need your cooperation throughout this period—before, during and after.”
Anegada is highest point at 28 feet and is the flattest island in the entire British Virgin Islands.