Cooper Island is a tropical island paradise. Its location close to Tortola and Virgin Gorda makes it popular with locals and visitors alike. From Road Town, a ‘go-fast-boat’ or water taxi will have you dipping in the warm, turquoise water of the sandy, palm-lined beach in 15 minutes.

Manchineel Bay’s main anchorage faces west for stunning sunsets, and the Cooper Island Beach Club hosts a fine bar and restaurant for tropical cocktails, meals, and much more. During the tourist season, the destination is nearly always full of yachtsmen and charter boaters who make it a first night or last night stopover.

Cooper Island has a little known but interesting history. The island’s name is somewhat enigmatic, but there are two theories: it was named for its first settlers, a Dutch family named Koop, or it was named Cooper for the coopers that came to collect the white cedar used for making rum barrels.

Many visitors and sailors know that Cooper Island’s superb snorkeling site is in the waters around Cistern Point and the rock named Little Carvel Rock. What is not commonly known is that on the shore adjacent to the rock are the remnants of a cistern once used for watering livestock and plantation land. A plantation existed here back in the 1800s and possibly earlier. On the summit of the promontory lies the ruin of a fort, now the base of the old Fuller residence. The walls were made some three feet thick to resist cannonballs fired from potential enemy ships.

Jack and Nancy Fuller, now sadly passed away, once told me that according to local lore, a dungeon existed under the fort for incarcerating trouble-makers but, it has since been converted to a cistern and has never been properly explored. During some 44 years of residency at their bohemian cottage above Cistern Point, the Fullers found many artifacts from the plantation era, including musket and cannonballs. So why would there be a fort on a small and insignificant island like Cooper? The Fullers explained it this way: “In the plantation era, there were no police and no military to protect the citizenry, especially on an outer island like Cooper. In the event of a pirate attack or Spanish incursion, it was every man for himself. Self-protection was paramount.” 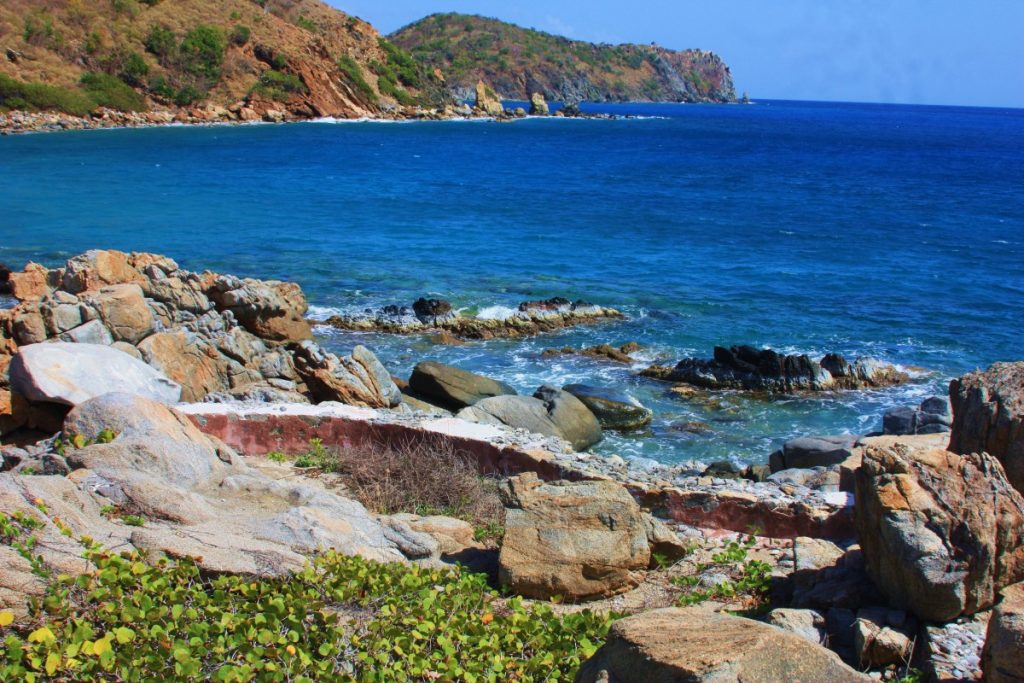 During the 1900s, Cooper Island property changed hands on a regular basis. The Abbott family owned the whole island up to 1910 when Samuel White bought the northern half, while the Abbots retained the southern portion. Cornelius Leonard of Salt Island became firm friends with White, helping him farm his property, which included the land at Cistern Point. Leonard later married White’s daughter Maria, a tall and stately lady, and they went on to have twenty children. Cornelius acquired 50 acres of land from White, a section that would later become the Cooper Island Beach Club. Leonard expended considerable energy building the beach with sand and planting the palm trees.

Several owners were involved in the Cooper Island Beach Club property before it became what it is today. A Mr. Eckert bought a large portion of the beachfront property from Cornelius in the 1960s and built a house on the hill, later to become the staff house for the beach club.

Then a yachtsman named McCord decided he wanted a land base and built a house on the beach, but this didn’t suit his wife, and it was sold to the Treasure Isle Hotel to provide a beach for Road Town’s land-locked facility.

By the early 70s, a few yachts from the fledgling charter industry would anchor off the beach. A yachting couple, Tim and Jan Short (now Nicholas), who had sailed from England on their Wharram catamaran, became the first management team of an alfresco restaurant on the beach.

On Tuesdays, the windjammer Flying Cloud would bring passengers, and Bomba’s Fungi Band would provide entertainment. “My two years at Cooper Island were the best years of my life,” explained Jan. “My daughter, born during our time on the island, is called Stephanie Cooper Short.”

In 1980, Toby Holmes and Steve Pardoe acquired the property, and with Chris Tilling as part-owner/manager, turned it into a successful beach bar and restaurant. The philosophy was to keep it low key and eco-friendly; the island had no electricity, and a generator was used very sparingly; even blender drinks were not available. Battery-powered lights and candles actually added to the ambience of a bohemian tropical island paradise. The view was, and still is, magnificent overlooking the Sir Francis Drake Channel with the sun setting over Tortola. Guest cottages were added to the property in 1992, with further additions in 1996.

Cooper Island’s main anchorage of Manchineel Bay has some 60 moorings with the convenient new ‘boaty ball’ system installed, a pre-book and reserve system all done on-line.

The bay is a central location for scuba divers with a dive shop ashore. Nearby are the shipwrecks of “Wreck Alley” where derelict vessels have been sunk to provide artificial dive sites and fish habitats. The internationally famous wreck of the RMS Rhone is also not far away. To the south of Little Carvel Rock, the island’s popular snorkeling spot, there is a well-defined isthmus called the Haulovers that divides the island, and here a small bay offers a good anchorage in the sand for one or two boats with close proximity to two dive sites.

In 2009, the Cooper Island Beach Club changed hands again, and the property, now owned by the Harris family, underwent major renovations and improvements. Probably the most salient feature of the upgrade is their continuing ‘green’ initiative. Ninety solar panels installed on the roof of the restaurant provide nearly 75 percent of the resort’s energy requirements, and the hot water to the cottages is also produced by solar power. Other eco-friendly features include environmentally friendly detergents, recyclable corn-based cups and take-out boxes, and a composting area for vegetable matter. Chip fat from the fryers is even recycled into bio-diesel for the generator.

The new-look resort has a delightful open-air lounge area under shade umbrellas, and several beach games have been provided. The restaurant continues to be popular with several new menu items, and the prices are reasonable by today’s standards. The accommodations have all been upgraded to a high level of comfort. The eco-resort has a full water sports facility, a rum bar, its own micro-brewery, an interesting gift shop, and a coffee and ice cream bar.

Cooper Island Beach Club has been completely restored after the devastating hurricanes of 2017. Now, after the debilitating effects of the COVID-19 virus, the resort will be in full swing by mid/late 2021. It still maintains a unique charm. With the husbandry and nurturing the island has received during its interesting history, it looks set to remain an enchanting port of call. 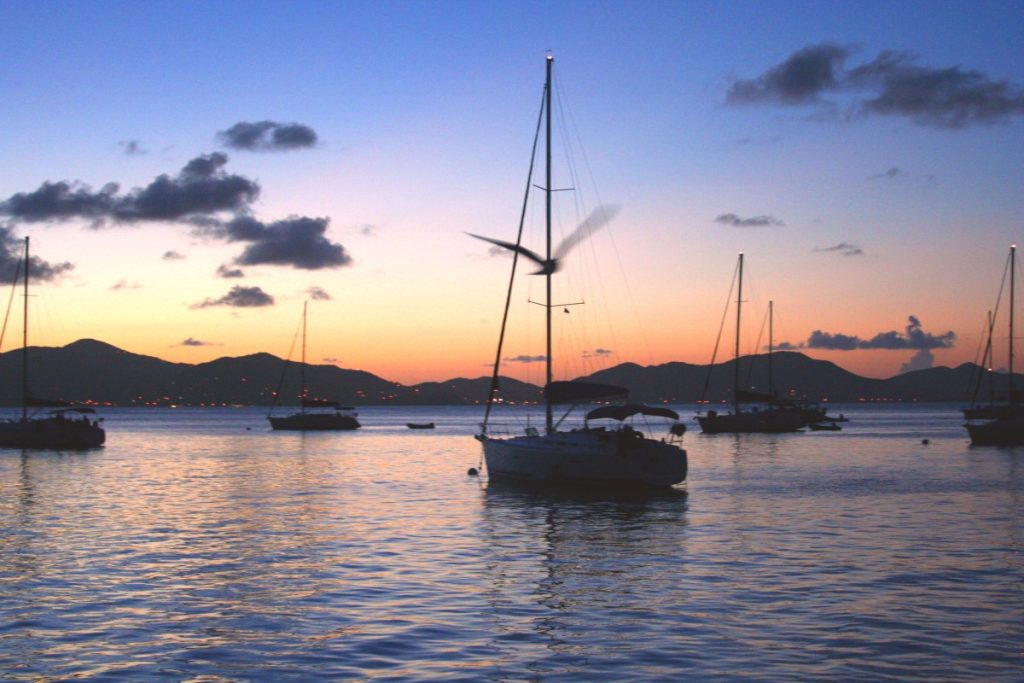 Note: In the interests of the islands’ conservation efforts, the Association of Reef Keepers reminds visitors of their slogan: ‘Take only pictures, leave only footprints.

Previous Article
31 MLK Quotes to Inspire you Toward Your Goals
Next Article
The Interconnected Ecosystem of Agriculture, Food and Health