The British Virgin Islands is widely known for its beautiful sun, white sandy beaches, and sailing adventures, but these islands have also been claimed as a bird sanctuary.

During the summer months, BVI Love is shared by over 210 bird species that inhabit our shores regularly and come to nest on the offshore cays and islets (1). As you continue to explore the BVI you should become aware and familiar with your beautiful neighbors. While some are more popular or pesky than others, we should be thankful that Nature’s Little Secret has taken bird preservation to higher heights.

The National Parks Trust of the Virgin Islands (the Trust) is a non-profit organization that receives an annual subvention from the VI Government and raises the remainder of its budget from park entrance fees, mooring permit fees, grants and donations to manage the various national parks within the territory. The Trust manages 21 national parks and protected areas, six of which are bird sanctuaries, including Great and Little Tobago, Dead Chest, Fallen Jerusalem, West Dog and Prickly Pear Island.

The National Parks Act (2006) provides the legislation to manage protected areas and control the activities that occur within these spaces. This is to protect the habitats’ biodiversity and conserve it for future generations of Virgin Islanders.

Now that we have outlined the importance of these national parks that protect the birds and their habitats within the BVI, and acknowledge the efforts to create, maintain and develop a vital element of the Tourism Product, let’s meet our feathery friends. 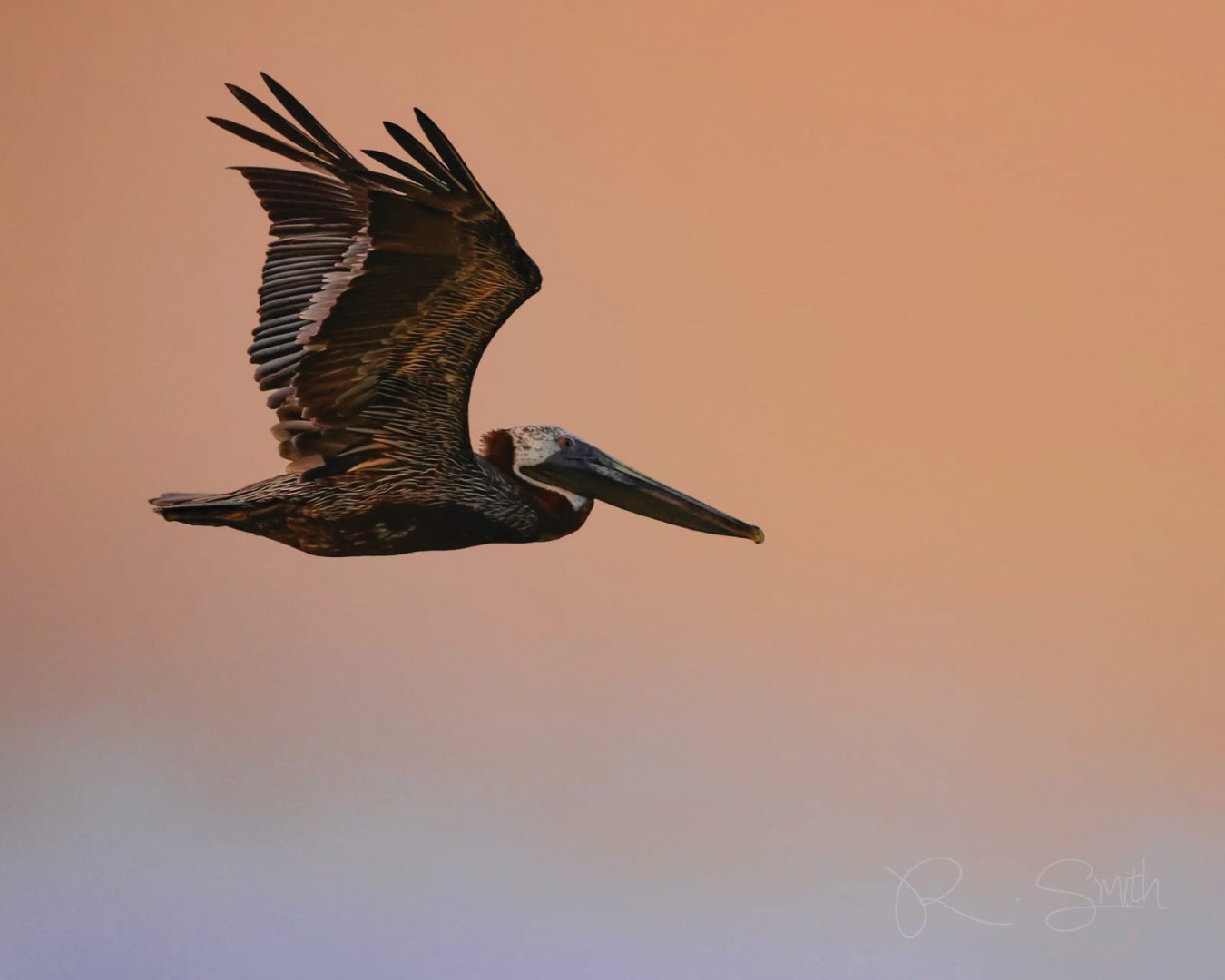 The Brown Pelican (Pelecanus occidentalis) is one of only 3 pelican species found in the Western Hemisphere. It is also one of the only two pelican species which feed by diving into the water (2).  On a beautiful beach day, these birds are not people-shy, they can be seen flying in long lines close to the water’s surface and diving alongside the locals who come for a dip.  These seabirds are found throughout the BVI.  They are usually grey-brown in color and have a long accordion bill which allows them to scoop up fish. 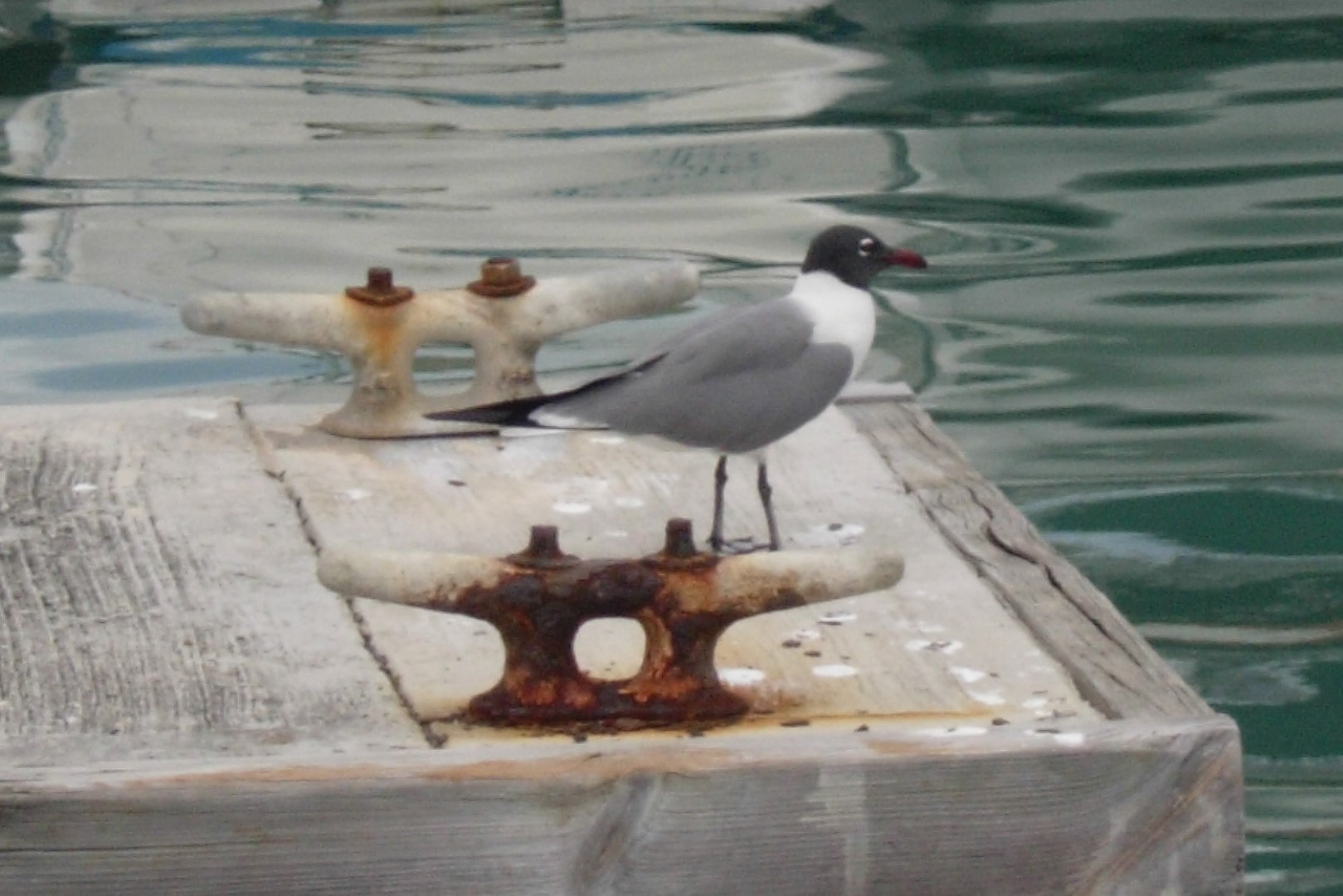 The Laughing Gull (Leucophaeus atricilla), or David as they are called locally, come to the BVI to breed and raise their young from April through October every year. This species nests on Fallen Jerusalem and other outer islands but be rest assured that if you are having lunch anywhere in the vicinity of the cruise ship pier, they will fly close by and beg you nosily for their share of the food. 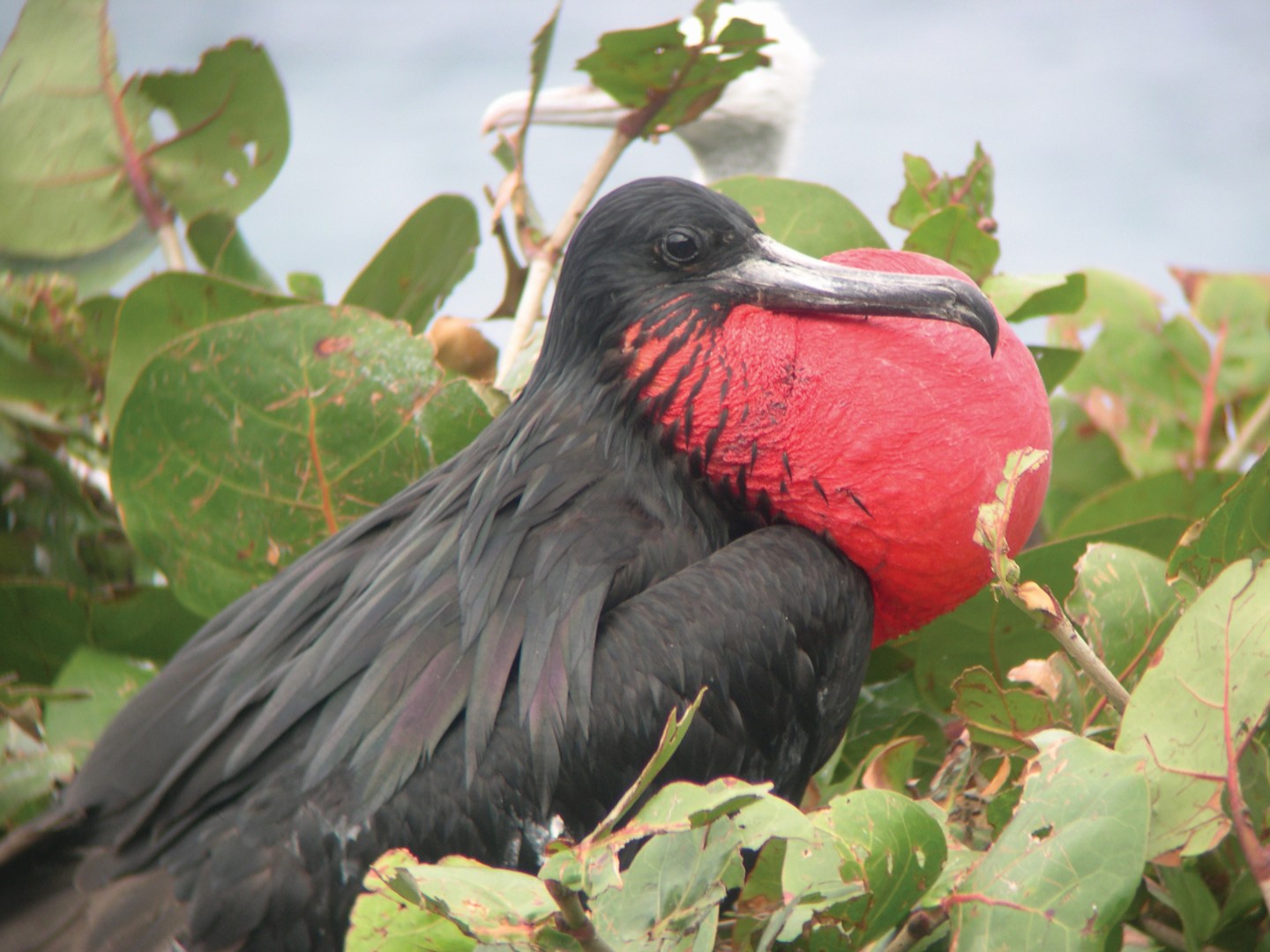 Besides the neighboring Caribbean country of Antigua and Barbuda, the BVI is the only other place in the Eastern Caribbean that can boast a rookery for the Magnificent Frigate Bird (Fregata magnificens), Man of War or Scissors Tail, as it is called locally. The parents raise their eggs and young on the outer island of Great Tobago National Park. Usually during the summer months when nesting, males sport a red pouch. However, unlike the Laughing Gulls, the Man of War bird is resident in the BVI and lives year-round fishing for fish to survive. This species is also called the “pirate of the skies” because of its habit of harassing other birds to steal their fish.

There are a few species of frigate birds, but the ones found in the BVI are the largest of its genus and spread about 7 feet from wing tip to wing tip, this species has the largest wingspan of any bird in the BVI. Look out for them in your travels when out at sea. Fishers must keep them from eating their fish while clearing a fish trap. While we advocate for line fishing, unfortunately, the Magnificent Frigate Bird can be hooked and drown if not unhooked quickly as the bird does not possess waterproof feathers.

Also, this species may catch a fish on a fishing line and the fisher cuts the fishing line for the bird. Unfortunately, the bird may take it back to its nest, but is unable to clear the hook from the consumed fish or its young becomes entangled in the fishing line.

From 2015 to 2016 Magnificent Frigate birds and Brown Boobies (Sula leucogaster) were satellite-tagged by the Jost Van Dyke Preservation Society and the Ministry of Natural Resources, Labour & Immigration of the Government of the Virgin Islands to learn about the flight routes of this species. This research showed that some frigate birds travelled as far as South America!

The Brown Booby (Sula leucogaster) looks like a smaller version of the Brown Pelican and is usually seen along the coastline. They nest at nearby Great Tobago and Little Tobago National Parks. The brown upper side, yellowish bill and feet, and the white underside are characteristic of this species. They hunt for fish by diving into the sea, with wings held back and close to the body, descending from 5 to 10 feet deep, as they try to catch species of baitfish, usually silvery in color.

You might recall travelling to St. Thomas, US Virgin Islands on the upper deck of one of the ferries in the morning and noticing a bird hovering overhead. It is a Brown Booby or the Fish Hawk, which has learnt the symbiotic relationship that when the vessel startles a fish as it sails along, the fish sometimes jumps out of the water, which the Booby sees and quickly darts to catch. Sometimes the Booby is successful. 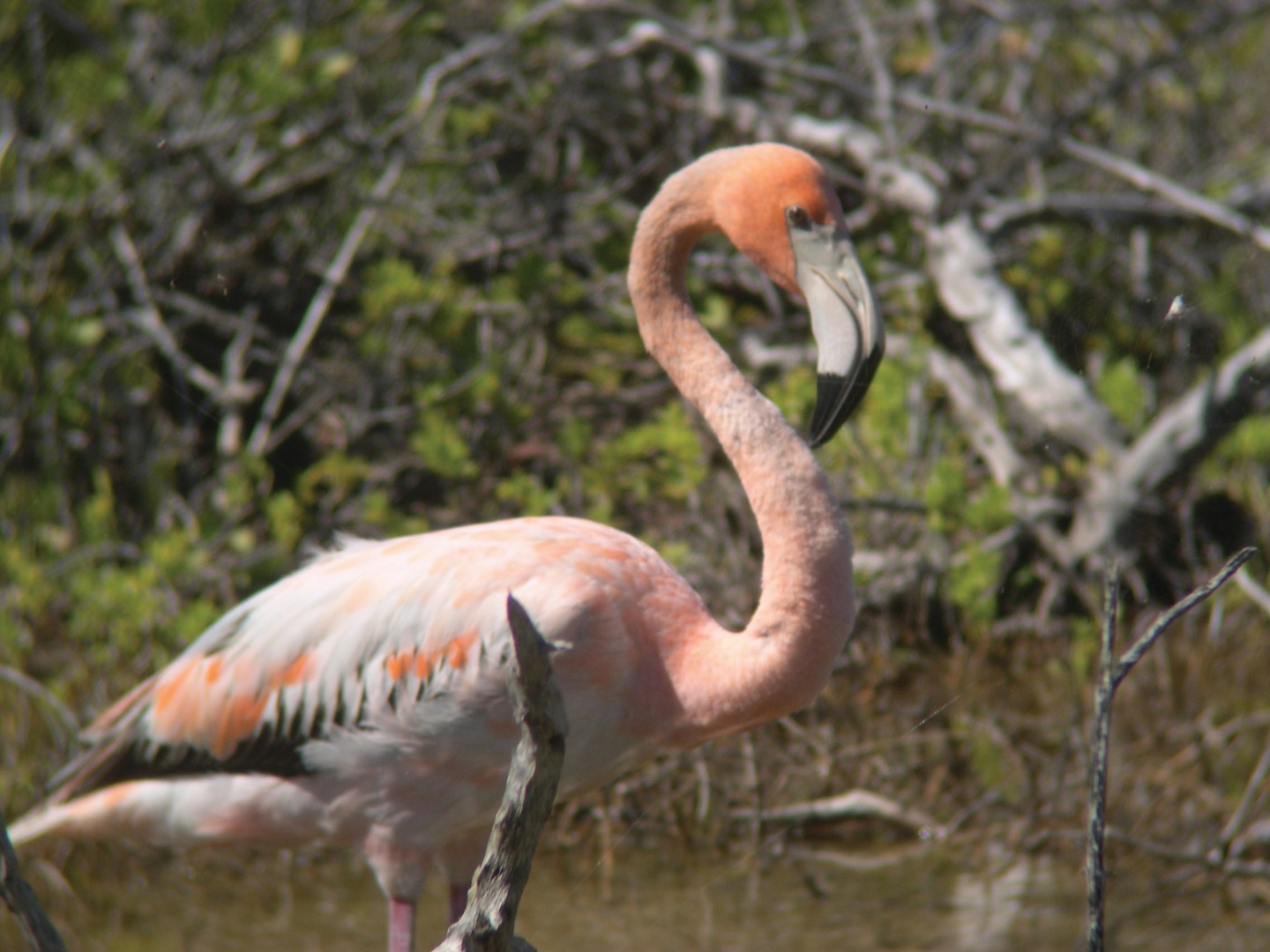 The infamous Greater Flamingo (Phoenicopterus ruber) were present in the BVI during slavery times. However, they were hunted for their beautiful feathers and became regionally extirpated, save for those in Cuba, the Bahamas and Bermuda.

The species were reintroduced to the Territory during the 1980s and 1990s when Dr. Henry Jarecki imported approximately 30 birds and placed them in a small salt pond on Guana Island. A small breeding colony was established and coupled with several birds imported from the Bermuda Aquarium Zoo, the flamingo colony was expanded to the larger salt ponds on Anegada.

Additionally, British billionaire and resident, Sir Richard Branson, brought in flamingoes and set up a colony over at Necker Island salt pond. These beautiful birds boast lush, pink feathers and black curved black bills and are seen wading Anegada’s salt ponds and shallow reef flats.  Today, approximately 400 birds live in the Territory. Some lucky persons while at the beach on Beef Island, may have seen the flamingoes flying in a V formation on their way to Josiah’s Bay salt pond. Recently, there was a report of a Necker Island flamingo being sighted at a salt pond in St. Thomas, USVI. 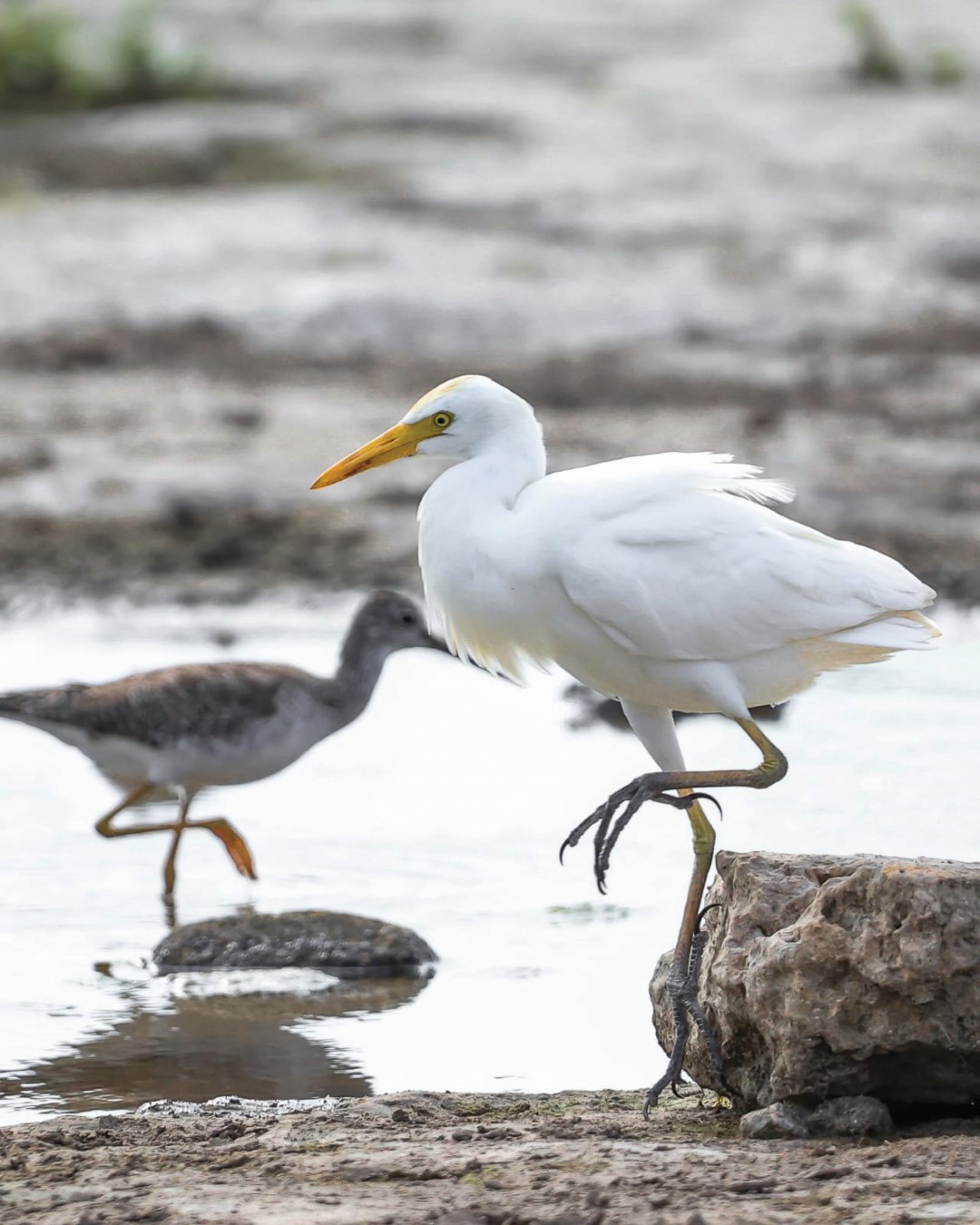 The Cattle Egret (Bubulcus ibis) is so named for its frequent association with cattle and other livestock, farms and rural environments. In the BVI, we rightly call it the Cowbird. The Cowbird is a large bird with all white feathers and a yellow bill. Local people normally thought that the Cowbirds fed on ticks found on the cattle, but these birds would prey on the lizards, large insects and snakes that were disturbed as the cattle passed in the pastures or bush. Decades before, cattle rearing was common in the BVI, and the Cowbirds were a common sight. However, with the fading of cattle production, these birds are not seen as often in the BVI. However, a small colony feeds regularly at the Pockwood Pond incinerator. Not to be confused though, with the very similar Snowy Egret (Egretta thula) that can be seen along our coastlines feeding on fish and has a black bill rather than a yellow one.

The Pearly-Eyed Thrasher (Margarops fuscatus), or Thrushie as it is called locally, is not your very friendly neighborhood bird.  As feathery neighbors, they continue to lay claim to the many fruits in your garden, often first eating or picking the special fruit that you have been eyeing and waiting so patiently to ripe. They are common throughout the island, even in Road Town, and especially around homes and hotels, with birds going into houses and restaurants, stealing food, being aggressive toward pets and chasing smaller birds. These brownish and white birds with dark spots are very agile, make tweeting sounds day and night, and return to nest in your house year after year. 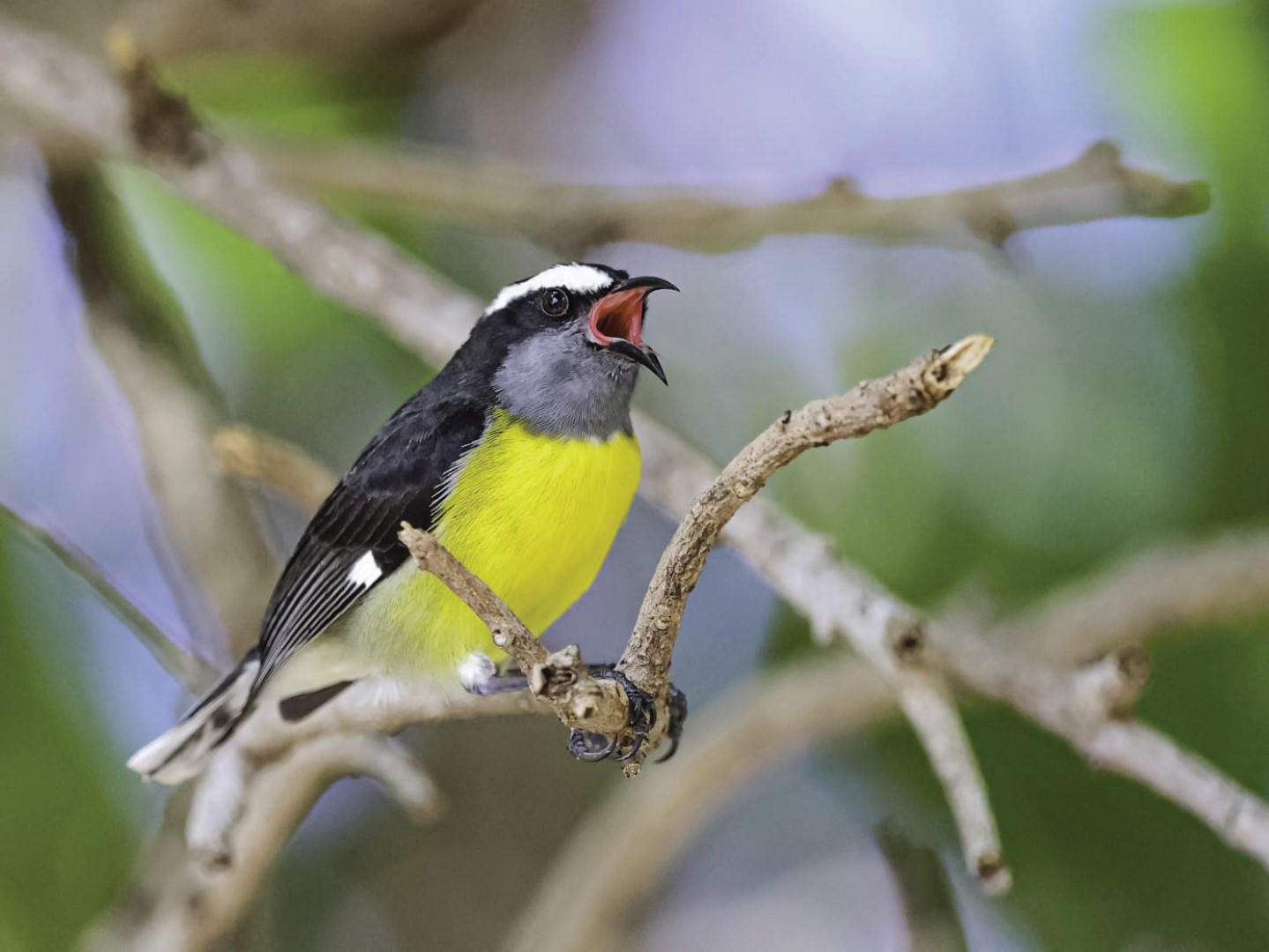 The Bananaquit (Coereba flaveola) is known for its characteristic bright yellow feathers. It is a very small noisy bird, measuring only about 2 to 3 inches long.  In the morning, their voices echo in the air as they feed on the flowers and fruits in your garden. The males attain a bright reddish crown and darker red and brown streaks on the breast during the breeding season. These birds seem to mate for life and the pair builds waterproof basket-shaped nests among Acacia or Cacti trees to help protect their eggs and chicks from predators.

If you are interested in starting the journey as a birdwatcher, the Merlin App is a free and useful tool to identify birds and keep track of all the species you have observed. Also, a pair of binoculars and a bird identification book can come in handy to identify birds further away more efficiently.

While there is no physical bird-watching group in the BVI, there is a Facebook group called BVI Birds and Wildlife where members post photos of birds or any wildlife that they come across in the BVI.  Everyone is welcome.

To learn more about birding in the BVI generally, please join the “BVI Birding” Facebook Page. Birding enthusiasts are encouraged to help contribute to regional knowledge by sharing their observations through the online database at http://ebird.org or seeing how they might become involved in bird surveys. More information about the Caribbean Water bird Census (CWC) can be found online at www.scscb.org or contact the Jost Van Dyke Preservation Society (susanjvdps@gmail.com or 540-0861) to learn about their Census.

A must-read would be the “Birds of the UK Overseas Territories” which has just been published! The book explores the birds and other wildlife of each of the 14 UK OTs with a particular focus on environmental threats and conservation issues.

And here is one for your library at home; “The Virgin Islands Environmental Atlas was published last year by the Trust.  It contains 28 sections that explore the VI’s biodiversity and habitats on topics such as plants, birds, amphibians, sea turtles, salt ponds, mangroves, seagrass beds and coral reefs. This is an essential guide for students and residents to better understand and value the unique species and habitats found in the Territory. Note: The Virgin Islands Environmental Atlas is on sale at the NPTVI office at 57 Main Street, Road Town, Tortola and most bookstores. Call tel. 393-9284.

A big shout out to Mr. Kelvin Penn who worked with the Conservation and Fisheries Department for many years, Nancy Pascoe from the Trust who provided some information and pictures to make this article come alive and Mr. Rondel Smith, from Anegada who is not only an avid bird watcher but has provided several pictures and relevant information.

An abundance of birds is not just a blessing, but a sure indicator of a healthy ecosystem and the fact that so many species decide to call the BVI home whether year-round or just a migratory stop, tells us that we have a job to do in preserving nature’s little secret for both ourselves and the wildlife that we share it with.