by Dean “The Sportsman” Greenaway 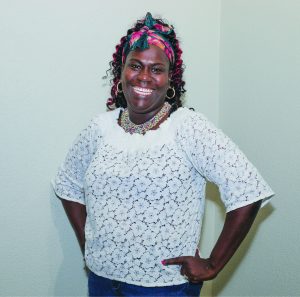 Behind Cleopatra “Cleo” King-DeFreitas’ radiant smile, is a spirit of caring and giving, even though she faced a series of health challenges—a stroke, 19 surgeries and four brain surgeries within three years.

In May, she organized Cleo’s Miracle Basketball Tournament, raising funds for underprivileged school children, 10 of whom will be gifted uniforms and school supplies from eight different schools across the territory for the 2019-2020 year.

When the 41-year-old school teacher was diagnosed with Idiopathic Intracranial Hypertension at 35, doctors predicted that by 2018 when she turned 40, she would be bedridden and certainly not helping others.

“I’ve had 19 surgeries, a minor stroke on my right side and doctors diagnosed that I wouldn’t be as mobile as I am now at 40,” an optimistic Cleo who has been teaching for 16 years reflected. “I have a device in my head called a VP Shunt—it drains the excess fluid off my brain. The disease takes your sight and cripples you. I wasn’t supposed to be this mobile by 40 and would have had to stop teaching. I’ve had four brain surgeries in three years and doctors said I would have succumbed to the disease.”

In 2018 when the mother of five turned 40, she organized a gospel concert at New Testament Church of God—to help others in need.

“My theme is giving back and the concert was to help women in need and I also decided to bless the group MALE (Mentoring Anointed Leaders Everywhere) and gave them some money because that was something meaningful to me,” she explained. “Long story short, I helped pay some women’s rent, helped others with their bills—women who I knew for sure were in need. I signaled them out, went to them and I blessed them. After that, I decided this is something I’d do annually and every year, I’d do something differently or, if I run out of things to do, I’ll repeat some of the things I did before—but, I’m going to be giving back.”

Her 2013 diagnosis saw her in and out of hospital and away from her love of teaching, the longest stint being sitting out the 2016-2017 school year. When she returned to the classroom in 2018, she noticed that there were needy children—those who didn’t have proper uniforms and those who came to school without lunch or proper books—so she decided on giving to children this year.

The May tournament was a double-overtime victory for West Gunners—with just six players—who beat the Kennedy Bass Stars, 97-93.

“This victory went out to D’Moi (Hodge). His Mom put on the tournament and we had to defend for D’Moi,” West Gunners captain Ray Victor said. “He’s from the western side of the island and we played very hard. They‘re a younger team. They put up a great fight and they have some good players—great players—thanks to them for the competition.”

Bass said it was a hard-fought game with a last-minute ‘put together team.’

“No excuses,” he stated. “We had double overtime. They executed a lot better than us. Yhey were the aggressors. They came out the champion. Hats off to them.”

Victor said Cleo’s Miracle Basketball Tournament was a good one since there was nothing since the 2018 Save The Seed Tournament.

“She brought back a little passion for basketball and a crowd. People came out to support. We as the players were excited to come out here and break a sweat,” he said. “[IT’s been] a long time [since we] a sweat. Thanks to Cleo, we got a little rhythm back. I hope this continues. We need tournaments to stay in tune.”

Bass said it was a good initiative and what players needed and there’s exciting games going on—what people want to see.

“She called me from day one to do my part. Everybody did their part to ensure her tournament came off successfully,” he noted. “I hope she has it next year and it’s not just a one-off thing and that we can have more basketball and more people doing things that we can get more interest in the game, get fans out, and we can get basketball back up and going again.”

Cromwell Smith, a.k.a. Edju En Ka, whose team the East Rockers 2.0, fended off the Virgin Gorda Mystics, 54-50 for the Jr. Division victory said, “Cleo is the kind of person that our community needs to lift up. Too often we focus on the negative and there are so many positive things going on in our community that we need to highlight and that we need to bring attention to so that persons like Cleo become a model for the rest of us and to make a contribution to our community.”

Cleo said it was an awesome tournament in which the winners got a trip to compete in an upcoming USVI tournament. “I think this last game with the double overtime, the rhythm of the players, they were just into the game,” she noted. “They really wanted to win and they wanted this trip to St. Croix so they were fighting for it and that made a big difference.”

Words, she said, can’t describe what she felt about the tournament, as she was disappointed after starting off being sick in the early planning stages and the process was moving slowly. “But then the team came together. I had persons like Sherna (Robinson), Ereia (Smith), my Mother, my sister Evelyn who came on board and encouraged me not to give up,” she reflected. “It was really rewarding to see, especially on Saturday night. The crowd was good enough, the place was hot, but people still came out. Some persons came out all three nights. I thank them for that and next year will be bigger and better.”

She has since formed the Cleo Miracle Foundation and students from Ebenezer Thomas, Ivan Dawson, Leonora Delville, Elmore Stoutt, Joyce Samuel, Willard Wheatley, Bregado Flax and Robinson O’Neal school are the ones benefitting from her 2019 initiative.