A Real Pirate Island – Norman Island in the BVI 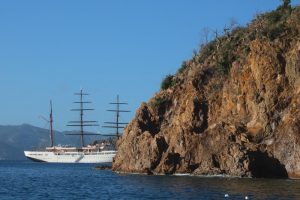 I once quoted the 50 or 60 islands, islets and cays of the BVI as a playground that even Disney, the theme park magnate, could not have replicated, as perfectly diverse as they are. Norman Island is unique in that it actually was the backdrop of an audacious piracy, and subsequent hiding place of a vast treasure – and there are substantial documents to prove it.

In 1750, the Spanish flotilla of galleons was on its way to Spain when a monster hurricane impacted the fleet south of Cape Hatteras and drove the heavily laden Nuestra Senora de Guadalupe aground and eventually ashore at Ocracoke Inlet (where Blackbeard met his end). Here two opportunistic brothers, Englishmen Owen Lloyd and John Lloyd plotted with the owners of two bilanders (twin-masted vessels with lateen sails on the mainmasts) to abscond with the treasure. John Lloyd, with a peg leg, ran aground on nearby shoals, but Owen got clean away. With a complement of fourteen men, it was eventually decided to head for St Croix, and then the uninhabited island of Norman in the British Virgin Islands. Here the treasure was divided, with Wade the shipowner taking five chests of silver and mastermind Owen Lloyd taking an equal share. The crew all got their share – but what do you do with large amounts of cash on a deserted island – you bury it! There was also a large quantity of trade goods including tobacco and valuable cochineal and indigo; its demise is unknown, but was likely sold in St Thomas.

Unfortunately for the pirates, the unusual activity in Norman Island’s Bight was noticed by several Tortolans. A certain Thomas Wallis arrived on the scene and inquired of the bilander why the vessel had not exercised the required pratique (i.e. formal permission given to a vessel to use a foreign port upon satisfying the requirements of local health authorities). This “put the cat among the pigeons”, as it were, and the players disbanded in all directions. Much of the treasure was buried on Norman Island, and subsequently much was dug up by BV Islanders and dispersed.

The story unfolds to include the local authorities of St Thomas, St Croix, Anguilla, St Eustacia and St Kitts. Spain was furious at the hi-jacking of its treasure and threatened war if Britain did not find and apprehend the pirates and return the valuable cargo. This led to heated exchanges between Spain and England, and eventually  the Lieutenant Governor of the Leeward Islands, Gilbert Fleming, whose authority included the Territory now known as the British Virgin Islands. Fleming set sail for Tortola with two ‘companys’(sic) of the best officers and men at his disposal. His goal: to survey the island of Norman in an effort to retrieve the treasure. On his arrival in the Territory, he found the Tortolans to be resolute in their refusal to divulge the whereabouts of the booty. There had been many injustices and injuries inflicted on them by the Spaniards. In the end, a compromise was reached whereby a finder’s fee would be awarded to those who returned their ill-gotten gains.

In 1910 or thereabouts, it was reported in more than one account that a chest of silver was found in one of the caves near Treasure Point. The caves, coupled with great snorkeling, make this spot one of the most visited in the entire BVI.

There can be little doubt that Robert Louis Stevenson used the Norman Island piracy as the basis for his popular children’s book ‘Treasure Island’. Among other things, the year of Stevenson’s treasure map coincides exactly with the actual events of August 1750.

Norman Island’s circumference is dotted with beautiful protected bays and anchorages, many with names related to its nefarious past. Privateer Bay, Treasure Point and Money Bay all belong to this category. The Bight is a large protected bay with upwards of a hundred moorings. The popular ‘Pirates’ restaurant is on a pretty sand beach at the head of the bay. From here you can walk the scenic trails to the summit of the island, east to Benure’s Bay and on to Money Bay or west along the ridge. Benure’s on the north side of the island is a pretty bay and is provided with some sixteen mooring balls. Privateer Bay has about ten mooring balls and offers great sunset views over St John, and good snorkeling nearby.

The island is within easy reach from central Tortola and makes for a good first and last stop for those on charter. The infamous floating bar, Wille T, provides rum drinking revelry and Pirates’ Bight at the head of the bay offers a more sedate dining atmosphere with awe inspiring sunsets.  Besides being a beautiful island with a large protected Bight, it has the added attraction of a history of real pirate action, stimulating the mind and having you reach for the rum bottle. Aaaarrrh, here’s a toast to adventure!!

Tags:
Previous Article
The Last Tourist – Jane Louise Waller
Next Article
50% off to Play Tourist in Your Own Backyard!

50% off to Play Tourist in Your Own Backyard!
Guest Writer June 24, 2020
© 2018 Copyright VI Life & Style Magazine. All Rights reserved. A product of Relyon Marketing Group.
X