FACT – It has the most superior view of all the islands. 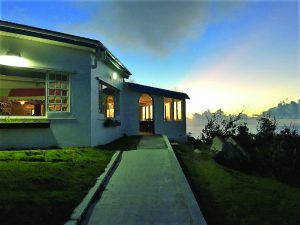 FACT – It has the best location for the most splendid sunset view.

FACT – Nowhere in the British Virgin Islands or the US Virgin Islands, or better yet anywhere in the Caribbean, can you experience the owner of a restaurant being the actor of the most amazing dry ice and fire show.

FACTS, FACTS and all FACTs are the journey you are going to experience as you trek through the line of a story that can be read no place else other than the actual experience at a prime restaurant nestled in a prime location unique to all else in the British Virgin Islands – Sky World Food Theatre.

It’s a restaurant with a name many knew of for decades which sits at the peak of Harrigan’s Estate on the island of Tortola. From its genesis eons ago, it was known as THE top restaurant in the BVI. It died a slow death because of the distance from central Tortola and the advent of new restaurants that were easier to access at the click of a finger.

It overlooks all the islands of the BVI in addition to those making up the USVI. However, the true splendour to now enjoy was started by Greg George and his family in 2016.

“It was just sitting there for like three years in pretty much shambles so I took it over and renovated it because I know of its worth.”

George and his family had no idea what was on the horizon one year down and out of pure love for the priceless value that the property has, he delved into his pocket and renovated Sky Word Food Theatre. Less than one year later as they were about to sort out the fineries to have the place insured, came two supa-hurricanes – Irma and Maria on September 6 and 18th respectively. Irma ripped through the property like it did the entire BVI, flattening it even worse than when he took it over one year prior. And Hurricane Maria swept things even further away as ‘she’ complete the shaving left by ‘Irma’.

Though Irma was deemed the most powerful hurricane to have ever hit the Atlantic as of 2017, ‘she’ was not strong enough to break the spirits and the pockets of George. He, having counted his loss, knowing all too well that in the years to come he will be repaid not only at dollars and cents value but the hundreds of guests that will have the best guest experiences when visiting.

“Actually we are at a very good place now. The most amazing Chef being in the heart of the mix and other staff who have that simple touch of warmth and experience that every last person desires when dining out.”

The staff that Greg George speaks about includes himself. He is the fireman and owner that prides himself with the skill of doing some really amazing fire stunts. The fire show is put on when one least expect as it is never planned for a specific date or time…well, unless there is one of the regular special events that Sky World Theatre caters to like birthday parties, weddings, and staff celebrations just to name a few.

In fact, he holds dearly to his heart a wedding setting that was conceptualized by a local couple not so long ago as he said could not have materialized anyplace other than that prime spot of Sky World Food Theatre.

The sculpting of dry ice at the bar is another amazing attraction that George and his team pride’s themselves on creating an ambiance for guests. But it is all complemented by the one of a kind menu and cocktails. The menu capsules a range that caters to lots of seafood, a signature coconut dinner roll which was perfected with months of tweaking, salmon wellington, lobster and other meals.

“For this season we are introducing our mega surf and turf. We are well known for surf and turf but with the addition of mega, we know that it’s a recipe and display that many will try to replicate, but it will remain unique to us as the fine details are only known by us and revealed on the tongue and in the tummies of those who choose to have a bite in.”

George was in all smiles as he was asked about the quality of the meals prepared at his restaurant. With that warm smile that definitely welcomes guests and keeps them coming he said, “As the owner, I never worry about the taste of the food. I have a chef who I think loves her kitchen more than me. She has been with me from the get go and has a level of commitment that I am not sure I could find in anyone else so I do worry at all.”

He went on the say, “Not because it is my restaurant, but because I have eaten around enough, I can tell you it is by far a more superior menu, flavour and portion.”

Parallel to what comes out of the kitchen is that which comes over the counter of the bar. Apart from every beverage desired, both non-alcoholic and alcoholic blends, mixes and wines, the “Pink Sky” is a signature drink that had its humble beginning from the restaurant that existed there many years prior.

Another special feature that can be had at this prime restaurant is the Sundays $30per person brunch which runs from 10am to 3pm.

The traffic at Sky World Food Theatre varies. The busiest is on the day when cruise ships are in and expectedly so. Otherwise, one can expect an atmosphere of peace and tranquillity – one that gives you the out-of-this-world kind of feels. Privacy is at an all-time high and the ambiance is surreal.

“For tourists, if you are in Cane Garden Bay, you have the privilege of a free shuttle service to and from the restaurant.”

Locals and expats are thrilled at the come-back. Once they have one taste of the facility, they can’t resist returning. A perfect hint for you to call now and make your reservation.