VI warned to be vigilant as Hurricane Irma strengthens 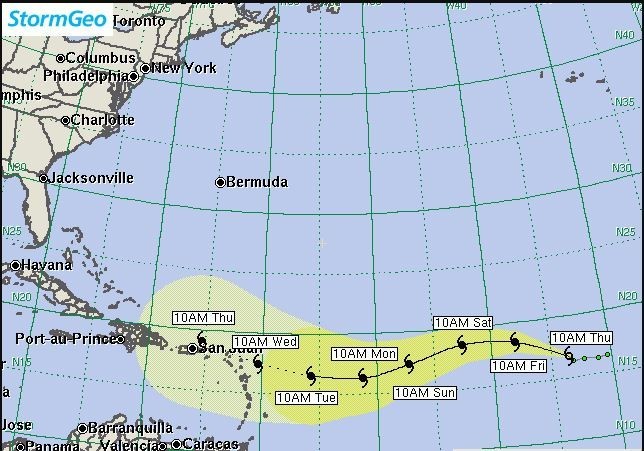 The Department of Disaster Management has sought to warn residents in the British Virgin Islands to monitor closely the progress of Irma that was officially declared a hurricane at 11 am today, Thursday 31st August 2017 via an advisory of the National Hurricane Center.
Hurricane Irma, as it is now called, is rapidly escalating and its maximum sustained winds have increased to near 100 miles per hour with higher gusts making it a category 2 Hurricane. It is now forecast to become a major hurricane by tonight and is expected to be an exceedingly dangerous hurricane for the next several days. Hurricane-force winds are expected to extend outward up to 15 miles from the center and tropical-storm-force winds extend outward up to 80 miles.
At 11 am Irma was seen near latitude 16.9 degrees North, longitude 33.8 degrees West and is moving to the west northwest at 10 miles per hour. This general motion is forecast through early Friday, followed by a generally westward motion on Saturday.
The hurricane has the likelihood to affect the northeast Caribbean islands as a major category 3 or 4 hurricane next Wednesday, with maximum sustained winds possibly over 130 miles per hour.
Importantly, the report continued, “Irma has moved somewhat south of and slower than all of the model guidance since yesterday. Consequently, it stayed longer over the warmer ocean temperatures away from the drier air to the north, possibly allowing the rapid strengthening that we are now seeing.”
All are asked to be on their guard, and begin putting precautionary measures in place to protect yourself, family, property etc. At this time, all are asked to make an assessment of their homes, businesses, and surroundings to determine what measures or actions need to be taken in the event that Irma impacts the Territory.
Those living within coastal communities, boaters, and sea bathers should also be aware of the possibility of significant swells on the north shore, from Friday into the weekend. “We are therefore appealing to all individuals to monitor the weather and sea conditions for changes over the coming days and be prepared to take immediate actions to secure property and protect life.”
Regular updates will be provided on local media stations, DDM’s website (bviddm.com) and Facebook at BVIDDM for regular updates.