The Resilience of Nature 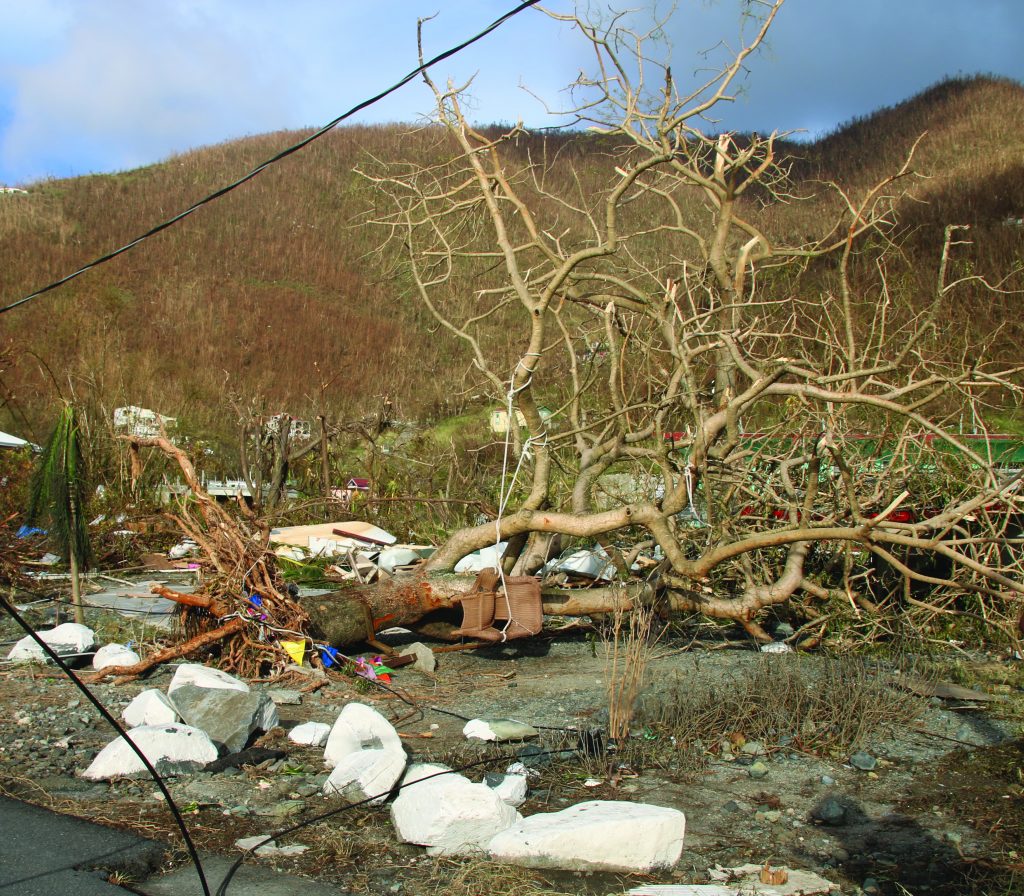 I came out of the safe house at 6:30 a.m. on September 7th to the roar of water tumbling down in the nearby ghut. The hurricane had passed but the noise of the water tumbling over the giant rocks in the ghut continued. The landscape looked as if the angry god Moko had wreaked vengeance on Tortola.

The verdant mountain, 1200 feet above sea level at Chalwell, had disappeared. Not a green leaf could be seen. All that was left were scarred, blackened trunks, scorched by 185 miles per hour winds. This mighty wind stripped the trees, removing branches and leaves, and scorching the remaining trunks. Many of the trees were shattered and lay in tangled heaps on the forest floor. Those that were left standing stood like thousands of skeletons as far as the eye could see. The birds, local, migrants and vagrants were crying – the only way to describe the noise – painful to the ear. Their homes and food sources were no more.

As I continued to walk around, the full impact of the loss engulfed me, the words of the Bob Marley version of Psalm 137 came to mind, “ how shall we sing the Lord’s song in a strange land” for the land was indeed strange.

One week later the rains came, torrent after torrent, causing flooding in the low lying areas along the coast and in Road Town. The rains washed the last vestige of topsoil from the exposed ground into the sea, killing whatever coral, seaweed and sea life were left and turned the already muddied ocean into a deeper shade of brown.

But the rains also brought life; small tufts of green appeared, and soon covered the bare earth. At the kitchen door amidst the wreckage of the garden, first appeared a pumpkin vine, followed by a tomato shrub, then came the sweet potato vine, and finally, a papaya tree appeared. None of these had been sowed or planted, they simply appeared.

As our small community grew closer, we shared shelter, food, clothes and water; and we also shared the bounty of nature. Eighteen months later, the papaya tree is still bearing fruit and is now home to a family of pearly eyed thrashers (thrushies).

As the rains continued, the hillsides became green again. Many colonies of weeds and shrubs covered with beautiful fragile flowers found new homes on the hillsides. In the forest as the green leaves slowly appeared on the blackened tree trunks, so did the vines. Curiously the leaves grew directly from the tree trunks; no branches appeared.

On the wider horizon, fragile ecosystems on other Caribbean islands were either destroyed or badly damaged.  Part 1 of a UNDP report on the destruction on the island of Barbuda was entitled, ‘A Paradise Turned To Hell’ The UN Secretary General, Antonio Guterres described the destruction on Barbuda in these words, “I have never seen anywhere else in the world a forest completely decimated without one single leaf on any tree…..” Part1 of UNDP Report November 2017.

Closer to home across the water, the island of St. John also experienced severe damage in its National Park which covers more than half of the landmass and is home to some of the best-protected beaches and coral reefs in the Caribbean. Darrel Echols, the Park’s Acting Superintendent speaking to Greg Allen on All Things Considered, a flagship news programme on the American Network National Public Radio, noted that the National Park was one of the hardest hit areas in the US Virgin Islands. Irma’s 185 miles per hour winds devastated park buildings, trails, forests and coral reefs. Jeff Miller, Fisheries Biologist at the Park, said that some of the Park’s most valuable assets, its coral reefs, now littered the beach as chunks of coral were ripped from the sea bottom by the storms.

Here at home the eye of the hurricane past directly over Virgin Gorda, Tortola, and Jost Van Dyke. The UK’s Foreign Secretary, Boris Johnson, visiting Tortola on 19 September 2017, said he was reminded of photos of Hiroshima after it had been hit by an atomic bomb. Sky New, 14 September 2017

While damage to our homes, commercial and government buildings can be assessed and monetized, the damage to our wildlife cannot be so easily determined. Although wildlife experts assure us that our ecosystems will recover from the damages caused by the hurricanes, it does take time. As the adverse effects of climate change continue unabated, our fragile environment will continue to be exposed to more vicious storms.

In the BVI, scientists from the Royal Botanic Gardens, Kew, have been working with the National Parks Trust of the Virgin Islands for the past twenty years and have now published a book soon to be launched entitled:-

As we continue the struggle, individually and collectively as a people, to achieve normalcy, our forests are also on the path to renewal. The upsurge of green groups and small farms after Irma, all preaching the same message, is a positive sign that our small community is moving in the right direction.

But scientific research, environmental education, community awareness and the implementation of strong protection mechanisms are essential to ensure our environmental future to protect, conserve and grow.

The Reverend Esther Georges is an Episcopal Priest and