Taste the BVI with the National Culinary Team 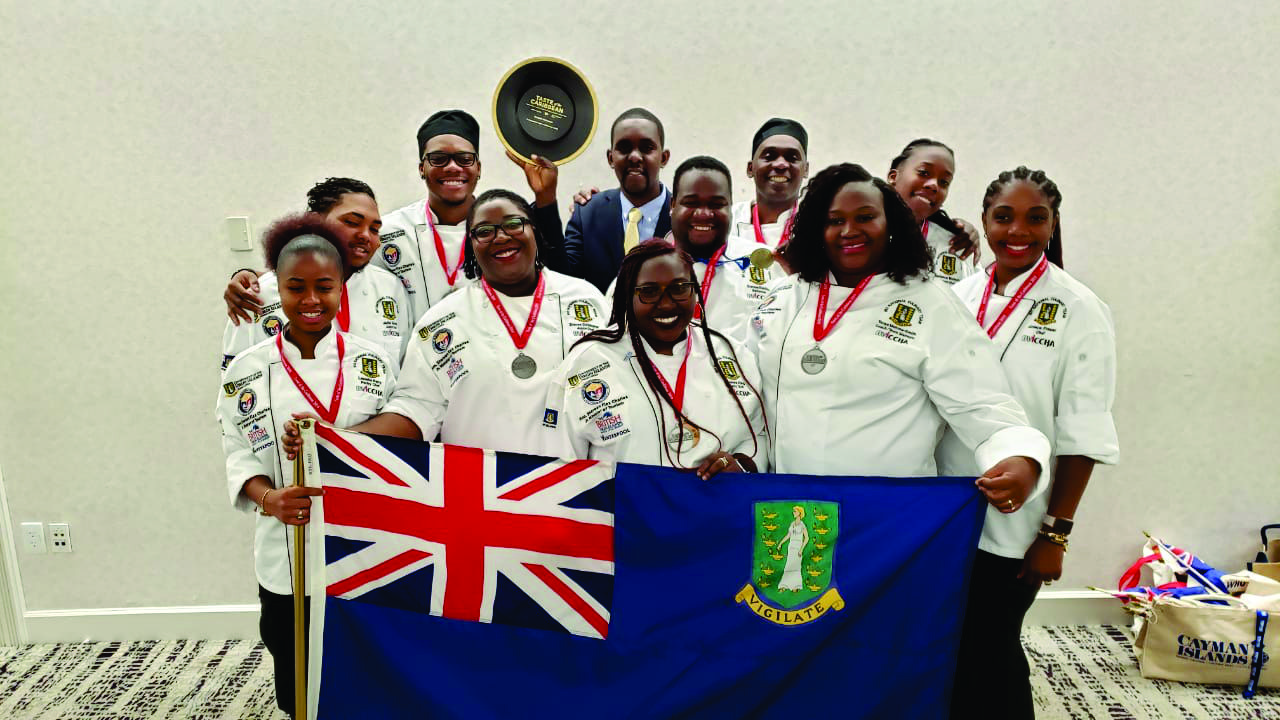 Since the early ’90s, the BVI National Culinary Team has been showcasing the many talents and tastes found in the British Virgin Islands. The team is managed by the BVI Chamber of Commerce and Hotel Association (BVICCHA), whose overarching mission is “To empower, educate and equip BVI businesses for success and growth.”

Important to note is that the BVI’s National Culinary team comprises a mix of chefs representing a number of restaurants in the Territory, in addition to students currently expanding their skill set.

This mix is what makes the team unique. BVICCHA’s President of Hospitality Mrs. Chaunci Cline says the youthfulness of the team was highlighted this year as they competed in international culinary events alongside seasoned professionals. Mrs. Cline said the youngest member, Jadiel Gibson, was quite impressive and showed great confidence.

She said, “Culinary tourism is a big part of [the BVICCHA’s] agenda for 2020 as we recognise that culinary tourism is key to growing the hospitality industry.” She added, “This is why we are working with culinary team. To help develop and grow it is our focus. As a destination, we want people to experience the culture through culinary arts.”

This experience is shared at various competitive events like the “Taste of the Caribbean” in Miami, held in June, and at which the team won several awards including gold, silver and bronze medals. The team also placed third at the Caribbean 305 Contemporary Street Pork Cook-off, a precursor to the official start of the Taste of the Caribbean.

Aside from awards, the BVI can boast of other culinary achievements, including Chef Kenneth Molyneaux serving as a judge at the 2019 Taste of the Caribbean. Chef Ken is a former captain of the BVI team and was named ‘Chef of the Year’ at last year’s competition. Another success is the special invitation by Chef Caswall (team leader) to participate in the Caribbean Food Championships in 2020.

Competitions are important, as noted by Mrs. Cline, but the BVICCHA is now expanding to a three-tiered approach. She highlighted three tracks that include development, community service and competitions.

The development track will involve mentoring in order to grow the talent already found in BVI. Regarding the community service track, Mrs. Cline says this will further expand what the team already has been doing by participating in local events to ensure the team is exposed locally. The competition track will see the team’s skill level being strengthened, and the Territory will be promoted when going after more awards and competitions.

The BVI National Culinary Team is hosting an Open House in October, and in November, will be busy showcasing the best the BVI has to offer during the BVI Food Fete. The Open House is being held to appeal to persons interested in the culinary arts. The event will also expand the selection for those representing the national team at overseas events, in addition to earmarking those who can benefit from development.

Mrs. Cline explained that some of the requirements to become a member of the team and to compete is to be a BVI belonger, a one-year commitment, and an agreement to become an ambassador for the Territory.

Mrs. Cline made a special appeal to the Virgin Islands community to continue to lend its support to the team. She said that persons can help by encouraging young persons with potential.

To that end, Mrs. Cline said, “We have talented young people in BVI, but we need to create the platform for them. We have to invest in them. The scope of hospitality is wide and the growth potential is enormous. We need to increase exposure and awareness of this potential.”

She also said the BVICCHA plans to work with establishments who are willing to welcome aspiring culinary professionals into local hotels and restaurants in an effort to fulfill one of Government’s mandates: to “build from within”.

Mrs. Cline says BVI has a diverse culinary offering, and says, “The foods we use show the richness of our culture. Different persons will cook the same dish, and the taste can vary, but the essence is the same. An essence that transcends and lets you know that that dish represents BVI. That’s what is special about the BVI’s culinary offerings.”

The hospitality head also said there is a high level of creativity when using local, homegrown products. This creativity, she notes, was showcased at the events this year as salt from Salt Island and local herbs were taken from BVI to use as ingredients during the competitions.

Mrs. Cline wants the public to know that the BVI National Culinary Team is available.

“Invite them to your school or special event. We want people to experience the team. Let’s weave them into the economy of the Territory. Let’s become smarter and seek strategic ways to boost the economy through culinary tourism.”

“We have great potential…we look forward to every opportunity to be able to showcase who we are.”

Previous Article
Is Work Ruining Your Life? (and what to do about it)
Next Article
Chantel Malone Shares Her Struggles behind the Glory