Phillippe Leroy, a Steelman at 60 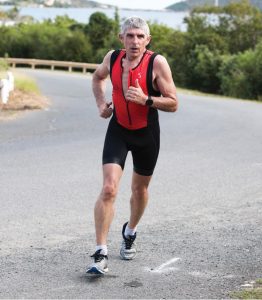 No one gave my fellow 60-year old Phillippe Leroy and I the memo that the BVI Triathlon Federation Steelman competition—a grueling Olympic distance event comprised of a 1500m swim at the foot of the airport, followed by a 40K bicycle and a 10K run on Beef Island—had been rescheduled from Nov 10 to 17.

That left Leroy in a quandary. November 16 was the finale of the 2019 Ceres Juices 10K series and the triathlon would follow the next day.

“This was the first triathlon I was going to do in 17 years,” he told me. “I can’t run the 10k then to do the triathlon the next day. My body can’t handle that. I’ll have to choose.”

There aren’t many men or women 60 and above engaged in competitive sport in the BVI. In May, Leroy won the BVI National Cycling Time Trials title, when he crossed the line in the 20-mile race in West End in 51:00 minutes to nip Antigua and Barbuda’s Rene Gayral—43 years his junior—by .01. The next day he was third in the 55 miles road race behind Anguilla’s Zambezi Richardson, 19 and Gayral, 17.

He was to compete in the UCI World Championships in England but funding woes kept him and Darel Christopher Jr. out of competition in September. Leroy, however, kept training, ran a few 10Ks, then set his mind on returning to triathlon with the Steelman.

Leroy was in fourth place in the swimming leg of the triathlon—then veered off course towards Tortola—returning from Well Bay. I tried calling him but he couldn’t hear. By this time, everyone was on course to finish and he was still swimming. Finally, he checked himself and corrected his course. Albeit, he went the wrong way again, as he came to the transition area and was enlightened where he has to go—a major tactical error that put him further behind. Natasha Ruscheinski completed the swim on 24 minutes and 38 seconds to Leroy’s 34:27. He was well ahead of Sarah Bolt, who was fourth in 29:39 when he went awry.

Then it was off on the 24.8 miles bike ride—his strong point. Leroy passed everyone including defending champ Dan Mitchell and finished a lap behind the relay duo of Clif Stuiken and then ran a strong 10k to finish in 2 hours 32 minutes and 45 seconds to become the 2019 Steelman—just off Chris Ghiorse’s 2007 record of 2:27.03.

“First time in 17 years, I wasn’t ready for it—I made some mistakes on the swim—I couldn’t see the buoys,” he said. “Towards the end, I saw a buoy and turned around, but it was the wrong buoy. When I came in, they told me I had to go back out and by that time, I’d more or less given up.  But then I got carried away on the bike like I always do and made up a lot of time. Then on the run, I made sure I didn’t run too hard except for the last half mile to look good at the finish.” 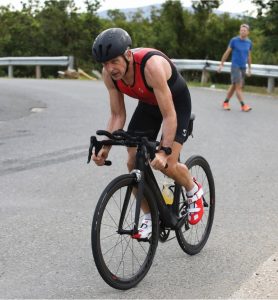 Despite a 17-year layoff, Leroy said he felt great but was just annoyed because of the swim. He expected to come out of the water in about fourth place.

“But the whole experience was great,” he said. “I love Triathlons. Especially the bike part. It’s a lot less dangerous than road cycling. People don’t draft against you. It’s just man against man really, power against power.”

Leroy’s original aim in the triathlon was to break the 2007 record established by Chris Ghiorse of 2 hours 27 minutes and 03 seconds—but was disappointed with the swim. At 60 he considers himself lucky to win the steel man competition.

“I train a lot but not much swimming, not much running, but I train a lot on cycling,” he said. “I’ve got a good heart, good lungs, good legs obviously, so I’m very lucky really—its genetics.”

Leroy is planning on getting off his bike on which he trains between 13 and 20 hrs a week and competing in more road races this year ‘just for fun’.

“When the Steelman was postponed, I went home and cycled eight hours,” he pointed out.  “The longest I’ve sat in my house and ride was nine and a half hours. Actually, I did 9.5 in the morning and about 3-hours in the afternoon. I was trying to do a lot of cycling in three weeks (for the World Championships) and I did 40-hours a week for 3 weeks—morning and evening. After that, I had to take a lot of rest.”

When I told him, like everyone else, I think he’s mad, he said he too thinks he’s mad. 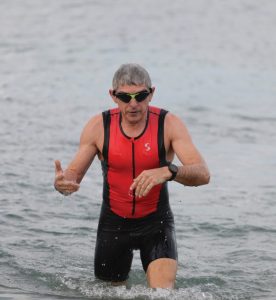 “I have to slow myself down and do less,” he said. “Every time I rewrite a program, it’s less hours, but then sometimes I just get carried away. And now I’m the Steelman.”

He dethroned defending champion Dan Mitchell, 35 in the process.

“It was extremely hard, very hot and very hard to catch the cyclists after losing them on the swim,” Mitchell said.  “I exhausted myself catching them. I don’t know what to say about Phillippe. He flew past me—very fast. He’s a special case, very impressive.”

Leroy used the Steelman as a practice for the Half Iron Man in Puerto Rico in March. He’s trying to win his age group to qualify for the World Championships.