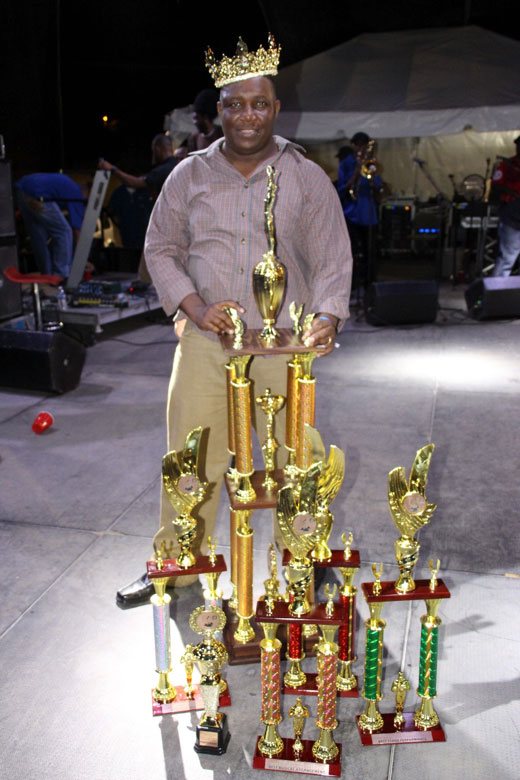 Roland “Chico B” Veira, 40, of St. Vincent and the Grenadines has captured the 2016 Virgin Gorda Festival Calypso Monarch crown along with several trophies and the grand cash prize of US$4,000 out of a field of five.

Chico B set the Franka Pickering Festiville stage on fire on Sunday, 27 March, 2016 in the two-hour long, two-round-competition to a large crowd, winning trophies for the best stage performance, best musical arrangement, best humorous and best lyrics, earning him the top spot and a total of 534 points.

He captured the hearts of many with both songs, the first one which was a tribute to the British Virgin Islands called “Thanks, BVI” and his hot number, “Rum Pipe.” for which he was the writer.

It is the very first time that he has competed in this competition.

His two songs were entitled “Virgin Gorda” and “Domestic Violence,” the male version.

The second runner-up position went to Gaverson “Mighty Falco” Al Frett at 409 points. He walked away with US$ 2,000. He sang “Kick them out” and “Festival in Virgin Gorda.”

At 368 points, Lester “Mighty Leh Leh” Fortelio secured the 3rd runner up spot and US$1,500, with his renditions of “Better Times” and “VG will be ok.” The other participant was Joseph “Mighty Reddo” Garcia.

Next Article
An Old Tradition Renewed