My adventure in the thrilling Painkiller Cup

Words and photos by Dean “The Sportsman” Greenaway

It was a new adventure for me going to the office. As a journalist, my office can be anywhere. Simply no walls or the trappings of the traditional office to worry about. This time it was to cover the InterCaribbean 6thPainkiller Cup—a 14 miles paddleboard race from Trellis Bay to White Bay, Jost Van Dyke. There was also the three miles Mini Painkiller Cup—from Sandy Cay to White Bay.

I had a lot learn. As much as I’ve heard of the event in its formative years, done reports on it during my sports-casting on the radio, I’d never been on the water covering it and had no idea what to expect.

This was Andy Morell’s baby. He had been organizing events over the last 40 years, particularly the Hook In Hold On windsurfing events or as it’s popularly known, HIHO.

Andy explained that the race would start at Trellis Bay and he expected at least seven teams, comprised of three persons each, one of whom had to be a woman. The winning team was competing for $2,500. Every 25 minutes they’d switch partners, similarly to a relay. Interesting I thought.

“I’m sure there are mishaps on the exchange,” I queried.

“Yes, there could be,” Andy said with a chuckle. This I wanted to see.

Promptly at 10 a.m., Andy sounded the horn and they were off on their paddle boards. The turquoise water was perfect with a breeze that made it glitter and there were scattered clouds, fantastic conditions for the boarders.

I immediately noted that on one team, the starter was flat on his stomach paddling, hands going in the water as if he was swimming.

As I was on a luxury cruiser which Andy was driving, I began thinking about what could be underneath his craft as they sailed behind Tortola.

Team NSP of St. Croix, immediately began separating themselves from the field. “These guys are good,” I said to Andy.

“Oh yeah. This is the sixth time they’re competing,” he pointed out. “They won it last year and have finished second every other time. They’ll be hard to beat.”

He was right. They kept separating themselves from the field and by the first exchange, they were way ahead.

We eventually caught up to them and Andy indicated I’d get to see an exchange, then we were hurrying to Sandy Cay for the start of the Mini Pain Killer Cup.

I wondered about the exchanges but teams were so spread out but Andy explained that they are good at policing themselves.

We took off for Sandy Cay, cruising behind Tortola, looking at areas I don’t recall seeing before. 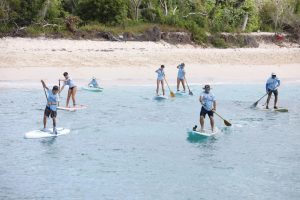 The site at Sandy Cay was amazing. The beach was dotted with eager paddlers ready for their three miles sprint to White Bay, while the waters off the beach had a number of boats forming a scenic backdrop. As those in the team race began passing, the shorter race eventually started with paddlers frantic to get to majestic White Bay.

Andy explained we had to get to White Bay to be ready for the finish where they’d run to a flag. Before we could get off the cruiser, Harold Cornier of Puerto Rico was coming in. I didn’t have enough time between pulling the dinghy on the beach and setting up my camera to get the shot.

“The wind was finally lined up this year for the first time and so it was a really fast course today,” Kraft whose team also won three round trip tickets to any destination on InterCaribbean, reflected after the race before the awards. “It was just really good for down winding from Trellis Bay to White Bay.”

When asked about the strategy for the event that saw them breaking away from their opponents early in the race, Kraft said the best strategy to win the race is to have a good woman on your crew and you need a strong woman to do well.

Vaine said of the four cups he has competed in, this was the best one hands down.

“It was so fast and the bumps were so good,” he noted. “The way the wind lined up move perfectly, we had a little bit of swells in there, so we were surfing the whole way. Pretty much when we got through the cut, the wind lined up, bumps lined up the waves and it was super fun surfing.”

Team High Country from Atlanta, Georgia, comprised of Kim Hillhouse, Kim Barnes and Josh Sloan, placed second and grabbed the $1,250 prize. One of them Kim’s promised that they would “drink it out on Jost Van Dyke.”  Team Fault Torrent of New York with Libby Alexander, her son Colin Alexander and  Andy’s son Josh, placed third and won $600. 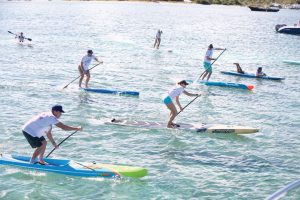 Solo paddleboarder, Cornier, 16, was competing in his first Mini Painkiller Cup and learned about the race on social media, easily whipped the other 24 competitors. Brian Duff of the BVI was second followed by Cornier’s 13 year old brother, Gerald. They all won round trip tickets to any destination of their choice on InterCaribbean.

“It was really fun because we had a lot of bumps in our favour and I had huge slides,” Cornier who competes in eight races a year, hit the water first and led from the start explained. “It was really good. The strategy was to get as many bumps as I could and stay in the lead.”

Reflecting on the event after the awards ceremony at Hendo’s Hideout, Andy said it was great fun, perfect weather conditions, said he couldn’t have asked for better as the races were conducted under blue skies and a nice breeze.

“There were a lot of people from the USVI, the winning team came from St. Croix, the second team from Georgia and a team from New York in third and racers from the BVI,” he noted. “In the Mini Painkiller Cup, first and third were from Puerto Rico, so it’s great to see people traveling to the BVI to race.”

When asked what makes the race challenging, Morell said as an open water race, it calls for tactics and strategy.

“It’s a 14-miles long distance race and there are lots of factors,” he noted. “It’s no surprise that the team that’s won it had competed in this race every time we’ve run it, so they know the waters and they’re familiar with the course.”