Chantel Malone Shares Her Struggles behind the Glory

For Long Jumper Chantel Malone, the road to becoming the territory’s first Pan Am Games medalist in its history on August 6 in Lima, Peru, was paved with inconsistency, doubts, frustrations, and a general shredding of her psyche that led to thoughts of quitting and enveloped in tears.

Long before that electrifying opening leap where she cut the sand at 6.68m (21ft 11in) on her first attempt, sailing through the 59 degrees Lima air, she began the road to the best performances of her career at the Florida Relays on March 31.

Described as ‘a horrible Florida Relays performance’ where Kala Penn bested her for the first time, Malone said at that point, she felt like quitting as nothing seemed to be going right. However, her coach, Olympic and four times IAAF World champion Long Jumper Dwight Phillips, told her not to worry about that.

“I listened to him, did everything in practice,” she said. “Honestly, his experience as an athlete resonates with me because he understands my frustrations or if I’m trying to explain something, it might not be the correct words used, but he understands it. That plays a major role in it and just having a level of trust, which I think is important in any coach-athlete relationship, so I think that has been a major key for me.”

By May, Malone had found herself. Competing the Torren Lawrence Memorial Invitational in Georgia, she recorded the best Long Jump series of her life.  On her fifth attempt, she disturbed the sand at 6.90m (22ft 7¾in), the best jump in the world at the time. Her performance equaled the 117 All-Time mark in event history on the IAAF list at the time. The competition included the best series of her entire career including marks of 6.68, 6.75 before the 6.90.

After the big jump, Malone said she cried because she had been going through a tough period.

“I felt lost. I was doing the work and everything I needed to do and it just wasn’t clicking,” she reflected. “When that happens, sometimes it’s very hard to stay positive or motivated because you’re wondering what’s happening and where is Chantel. For me to come out and get a personal best not once, but twice and have that series that I had, it was everything I visualized.”

Shortly thereafter, she hurt her hamstring, which put her down for a while as the Pan Am Games loomed. After rehabbing, it was getting her confidence back ahead of the Pan Am Games.

Days before she would depart for Lima, Malone had a meltdown competing during the Trinidad and Tobago National Championships.

“I got to my lowest point during the Trinidad and Tobago Track and Field trials on July 27,” Malone said of the event just ten days before striking gold in Lima. “I went there with the mindset to execute and do everything I was doing in practice because I was ready. I had been doing great in practice, went out there and it was like 6.0-something, with 6.20-something my highest mark at that meet.”

Malone said that Tahesia Harrigan-Scott was with her and she can’t put into words the feeling that overtook her.

“I told her that my chest felt very weird and I felt like I wanted to throw up or something—this doesn’t make sense,” she stated. “I had doping control—for jumping 6.20 something, like really?—after that, we walked over to the hotel, I went downstairs, Tahesia was still in the room. I just needed a moment to let it out and cry. I called my Aunt and in talking, I told her I just want to talk to my Granny. She was the one if I was going through something, she would talk to me and tell me stop stressing myself out, do what I have to do and be done with it. I couldn’t talk to she because she’s gone now. I told my Aunt that and I broke down crying.”

Malone said she felt so badly. It was like her body had seized up.

“I was actually scared because I was in the gym alone, so I told her I’d call her back,” Malone said. “I spoke to my Dad, then went upstairs and told Tahesia I literally had a panic attack and that was scary. I started panicking again and my whole body freaked out. Taheisa massaged me so I could relax. There was a lot of stuff going on. I’m working this hard, doing all I had to do and nothing was going right, as it was a matter of dealing with my shoes. I’m contracted by Puma, but my feet weren’t adjusting to them. In that moment, I made the decision that I’ll have to lose my contract to stay sane.” 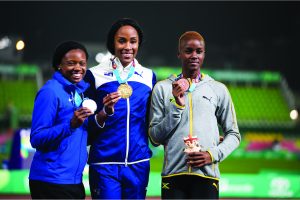 During the 2015 Pan Am Games in Toronto, Canada, Malone was in bronze medal position heading into the final round and wound up fifth. “The story of my life,” she would say. This year, she said her plan was to lay down her mark on her first attempt and have her competitors chase her, which she did in Lima.

“This is amazing,” Malone said after the historic victory. “We know how the season started with a great bang and then I hand an injury, been up and down, with performances and trying to figure things out. And, to come here and come out with the gold. That means everything to me.”

She said after her opening jump, in her mind she wanted to go further but as it got colder and colder—with temperatures dipping to 59 degrees—it became harder.

Malone explained that her thought process heading into the competition was not to focus on what happened in the past nor anyone else.

“Coach and I were talking and he said, ‘You need to be a dog from the get-go and let people chase you and you don’t chase them,’” she pointed out. “Normally, I would do good as I progress, but honestly, I just went out there, trusted the process and tried to execute and that’s the result that came.”

Phillips said he was grateful Malone was able to come out victorious after her injury, noting he had been working on having her hitting the World Championships standard of 6.75m on the first jump an improvement she has been making.

“The conditions were quite cold. Not the best conditions, but she has been able to come out victorious,” Phillip said.  “I have my first medalist in the Pan Am Games and I’m grateful for that. It’s more rewarding coaching someone to a gold than actually winning the gold medal myself.”

Malone said she’s happy with her performance which she hopes will inspire other young athletes.

“Winning gold is a big deal,” Malone said. “It lets the world know that the BVI is there. We’re small, but we have a lot of talent and I’m just happy to be an ambassador for my country.” 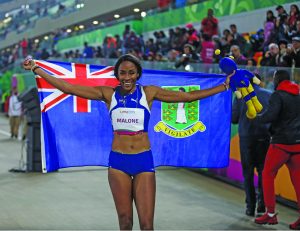 Another downside for Malone came immediately after winning Pan Am gold, when she lost her Puma contract. The pre-Pan Am meltdown she had, stemmed from her shoes which she explained to Puma, was affecting her. She had taped another brand of shoes when she leapt 6.90m and for her Pan Am Games medal.