Behind the Ridge Road Mural with Artist Ruben Vanterpool

Driving through Fahie Hill late one August morning on my way to Cane Garden Bay for a one-mile walk then a one-mile swim, I spotted area resident, Ruben Vanterpool, at the Fahie Mural with his paint set finishing up a grape tree leaf.

After exchanging pleasantries, I took off for the beach. During my swim, the thought occurred that I should have found out what this cultural iconic artist, a former teacher and Speaker of the Legislative Council was actually doing.

A week later, I had an appointment touring the mural, which he supervised with contributions from six artists including Quito Rymer, Cedric Turnbull, Garth Hewlette, Dean “Ghost” Smith, Pearl Friday and Thor Downing.

Vanterpool said the project idea was the brainchild of Eileene Parsons, at the time, Minister of Culture in 2001, under the government headed by Ralph T. O’Neal. Parsons had the idea that walls across the territory needed to be enhanced and not have just a stark appearance. 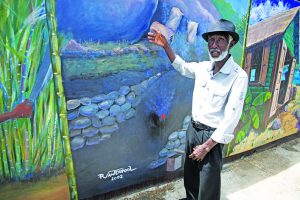 “The idea Parsons had for the Fahie Hill wall—which was one of the largest—was that it could be a repository of cultural images, pertaining to the area, hence the name Ridge Road Mural,” Vanterpool said. The wall, with 23 panels, depicts a journey of life in the Virgin Islands, long before there were roads, electricity, communications, conveniences and the many amenities we enjoy today.

Among the scenes reflected were agriculture, fishing, farming, cooking, baking, school, music, transportation, construction, cane cutting, and breeding cattle. One is dedicated to Dan Farrington as a courtesy for accommodating government in cutting the road by giving up sections of his land. Additionally, there’s one with Bobby Freeman, who did the same thing.

“The idea was that an outdoor museum could be created and everyone would have access to it and learn about our culture. The visitors would be able to come and see what life was like and what this country is all about,” explained Vanterpool, who painted nine of the 23 panels on the wall stretching almost 300 feet. “Having had the idea of doing this wall, she looked for someone to execute it. She spoke to me, I agreed and I did the design of each image for each panel in my studio. After they were approved by the Legislative Council, I selected a few artists to help me to carry the work out.”

After having finished design everything, Vanterpool painted the first panel in fall 2001, then the rains came and he abandoned the project until 2002 when it was completed with fellow artists.

Cutting cane, painted by Smith, was among the samples included in the mural. Vanterpool said many wouldn’t believe it but the Territory had its full share of sugarcane operations in the Virgin Islands and there were lots of sugar estates here, which can still be seen by the many ruins all over the islands. Names such as Notthingham Estate, Purcell Estate and Lower Estate, for example, highlight such areas.

“After slavery, a few were revitalized and people began to make rum again, especially during the days called prohibition, after the 18th amendment to the US Constitution where you couldn’t import alcohol into the US territories or the US mainland,” he noted. “And you could not produce it neither. It made a good bit of money and that was our glory days of sugarcane, our best days of sugarcane. After that, we continued to produce sugarcane until the mid-1960s and then it pitted out. All the hills around this area, for example, were well clothed with sugarcane. I had my part in this as I helped drive mules to the mill as a boy.”

Watering Cattle was painted by Hewlette. The idea was to support the cattle industry and support the farmers in their attempt to raise good quality cattle throughout the territory which was inspired by legislators H. R. Penn and Glanny Fonseca, who were the one spearheading wells being built throughout the entire territory and improving pastures, all for the purpose of rearing good quality cattle.

Friday depicted Baking Bong Bong, which most people know as cassava bread, but in the Fahie Hill area and most of Tortola, it was known as Bong Bong. The cassava skin is removed, it’s grated, sifted and ready to bake. It’s placed on a hot iron, usually over a wood fire. A hoop from a rum barrel helped to contain the cassava flour. A spatula is used to firm it up as it baked.

Friday’s Early to Market was a common practice of getting up early in the morning, taking fruits, vegetables and ground provisions to the Road Town Market.

“I would get up as early as 4 a.m. with my siblings, get ready and get to town as there was competition as everyone was doing the same thing and everyone tried to get to town as early as possible,” Vanterpool fondly recalled. “Goods were sold along the way and hopefully, by the time you reached the market, there’ll be nothing to sell. But usually, there was something to sell, hence the market was always full.” 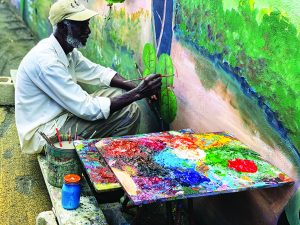 “The wall,” Vanterpool said, “is ideally repainted every five years.” It didn’t happen in this case as it was more than 10 years before it was repainted. Then there was Hurricane Irma and Maria which did some damage as well. During Irma, there was a fading of the colors and some wind blasts where bits of concrete came off and there was lots of chipping of the wall.

“I didn’t know wind could do that to concrete,” he said of the Cat 5 storm. “It took advantage of weak areas and also, some of the images were actually lost when the colours faded. Imagine after Hurricanes Irma and Maria, there was a lot of mud coming down from above the wall and all the mud came down over certain areas, then mildew came and all sort of things. So, we had to do a lot of cleaning and repainting.”

With the help of volunteers and family after Irma, they came and did some cleanup work he noted.

Vanterpool has produce the book entitled The Ridge Road Murals—Reliving the 1950s in Tortola’s Hillside Villages—which delves deeper into the history of each painting and showcases the contribution of each artist. Interested persons can obtain a copy for $18 and he can be contacted at (284) 540-5911.

Previous Article
Wyndham Lambert Beach Resort
Next Article
Leave Your Next Event with an Experience!