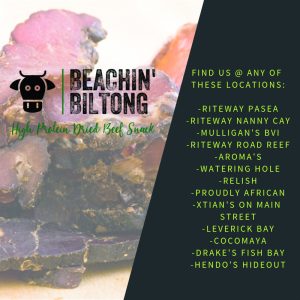 There’s a new snack producer in town and it’s here to stay. Beachin’ Biltong is the BVIs latest munchie craze. You may have seen it in black packages on the shelves of many retail food markets here and thought…’What it is?’. So here we are to explain!

Biltong is a mouth-watering protein packed air-dried meat snack. It has everything a meat stick should have: a little bit of salty, a little bit of spice, and a lot of savoury flavor. If you like beef jerky, think of biltong as jerky’s more sophisticated cousin.

Nestled in the hills of the British Virgin Islands, Beachin’ Biltong’s owner Dean Labuschagne has perfected the technique of producing and packaging in our climate and environs and has brought a bit of authentic South Africa to the Caribbean. Where our johnny cakes are their vetkoek, our traffic lights are their robots, our barbecue is their braai, we know one thing for sure: we will all be calling biltong by its rightful name on both sides of the pond.

It’s no secret that around the globe, different ancient cultures and tribes used similar techniques to preserve the gains of their hunts by slicing, salting and air drying their meat. Historically, in South Africa, the process of making biltong was refined as far back in the 17th century when European settlers made their way to South Africa. Improving the curing process using vinegar, salt, and spices, biltong has long been a South African tradition and now has the status of being a gourmet snack as producers experiment with different spices and flavours in combination with different types of meat.

Creator Dean Labuschagne studied as a chef in South Africa and received a City and Guilds Qualification. After living off biltong post-Irma, he decided to go big and introduce his biltong to the BVI and beyond.  Sourcing organic beef,  Salt Island salt and other local and organic ingredients, Dean has perfected secret spice blends that get you hooked right out of the bag.

When asked what the difference is between jerky and biltong, Dean explains: “Biltong is, in its basic form, a dried steak, which is then cut to eat. Biltong is traditionally marinated in vinegar and spices that add extra flavour to the meat. Jerky often has a dry and smoky taste because it is cooked on a rack whereas biltong is hung and air dried, making it more moist and flavourful.”

Dean’s passion is to bring the snack of his forefathers to the Caribbean where it is widely received as just darn good. Watch for new products coming out this summer including something for you, vegetarians. And remember to always Graze Responsibly!