By Angela U Burns

Dr. Smith was often asked as Premier: “Which do you prefer – Medicine or Government?” And he would always reply: “I love them both because they both have the same goal of helping people.”

And indeed, this highly qualified physician and surgeon has continued to see and treat patients on a regular basis for over 45 years. Now that he has retired from Public Office, he is able to do so more often and regularly. “It’s no longer Sundays only!”

Helping people has always been something he wanted to do and for decades, he has found himself living out his purpose.

Daniel Orlando Smith recalls being raised by a father who was very giving and always willing to offer someone a little extra at the bread shop, Josh Bakery in Road Town.

Growing up in a Seventh Day Adventist home, hearing on Sabbaths about the church’s medical missionary work all over the world fascinated him and so he decided at an early age that he wanted to become a medical missionary.

Well, that was the original idea and he did not stray too far away from his desire.

After completing 6th Form in Secondary School and a one year stint as a teacher at the same school he attended, he went off to the University of the West Indies Medical School in Jamaica in the ’60s.

Although the British Virgin Islands did not have what in the rest of the Caribbean was referred to as an ‘Island Scholar’, Dr. Smith, as a talented and gifted young man, was certainly our ‘Island Scholar’.

After completing medical school, he did his internship in The Bahamas.

Returning home to Tortola, he was told by his father: “You’re not really a doctor until you can cut.” This spurred him on to pursue surgical studies in the United Kingdom, leading to his attaining the prestigious title of a Fellow of the Royal College of Surgeons (FRCS).

He followed this up with an 18-month stint, gaining invaluable experience in obstetrics and gynecology in Barbados, as there was no OB/GYN specialist at home at Peebles Hospital at the time.

Furthermore, the Peebles Hospital Surgeon was expected to cover that area as well. And this he did, delivering hundreds of babies in the BVI along the way. “It was quite rewarding to deliver babies and as a surgeon, it was exciting to be able to cure people.”

Dr. Smith succeeded Dr. Robin Tattersall, who had served the Territory very well for many years.

Rising through the ranks, Dr. Smith was appointed Chief Medical Officer in charge of the administration of the Territory’s Health Service. Of course, he continued to be Surgeon, although in later years, persons like Dr. Kedrick Pickering came along as OB/GYN.

Dr. Smith remained in that position until 1996.

Throughout the years, he extended his service of helping people at his private clinic, where he practiced in the afternoons.

Dr. Smith looks back on his early years and sums it up as being “a most fulfilling experience.”

He noted that when he returned home to the BVI, there were only a few doctors, so they doubled up a lot. He also recalls that the doctors and the rest of the staff in the Public Health Service had a great working relationship.

As Chief Medical Officer, he was able to encourage local doctors by providing the equipment they needed to be efficient at the hospital.

There were times the Territory had to engage experts from neighbouring St. Thomas in the US Virgin Islands to come over to conduct clinics in areas such as dermatology and ophthalmology until there was a need for full-time service in those areas, or a young BVIslander with the necessary skills returned home.

“One regret I have is that we were not able to attract more local young people to study and work in the health professions,” Dr. Smith said, as he reflected on his decades of service in the medical field.

Speaking on the evolution of the practice of medicine in the Virgin Islands, he said while the Territory has seen several persons qualifying as doctors and the establishment of a private hospital and private clinics offering a variety of services, he would have still liked to see greater interest in the medical profession by BVIslanders who would provide a service for the people here, whether working solo or at an already established practice.

The former Chief Medical Officer and former Premier pointed out that Government has programmes in place to expose students to various disciplines and there are also scholarship opportunities available. He encourages more young people to become interested in the medical field and contribute to the health and wellbeing of the Territory’s citizens and visitors.

In terms of other achievements, Dr. Smith was instrumental in the establishment of a Medical Association, where practitioners would meet and share experiences to the benefit of everyone, both doctors and patients.

“A significant accomplishment of the Association was to start a general Medical Conference in 1980, which branched off into a Plastic Surgery Conference,” Dr. Smith said. “The doctors who came pledged their support and many, including Dr. McArthur and the world-famous reconstructive surgeon, Dr. Ian Jackson, did gratis work helping a lot of people here in the BVI.”

The Plastic Surgery Conference is held annually and continues to today. 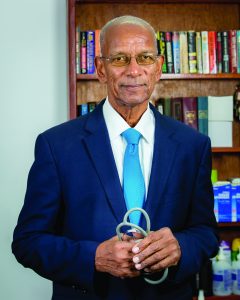 During the 1990s, this noted son of the soil’s passion for service took a major turn when he resigned from the public health sector and officially entered the political arena. He successfully ran for office in 1999 and served until his retirement in 2019.

“As an elected official, the transition was easy in a way because in that position I could continue to serve and in a wider capacity,” he pointed out.

During his tenure in the House of Assembly and while serving as Premier of the Virgin Islands, Dr. Smith and his National Democratic Party (NDP) team oversaw some significant developments in the health sector. These included the construction of the new Peebles Hospital on Tortola, the start and almost completion of the new Iris O’Neal Clinic on Virgin Gorda and the implementation of the National Health Insurance (NHI).

This was an extension of Dr. Smith’s desire to serve people. As he felt and certainly exhibited, he still has a lot of years and experience to share.

As a politician, he continued in private practice, even though on a very limited scale and only on Sundays for a couple of hours, when he was on island.

Last January, the House of Assembly unanimously agreed that Peebles Hospital would be renamed the Dr. D. Orlando Smith Hospital for the great contribution that he has made to medicine in the BVI.  But Dr. Smith’s contribution to medicine was recognized years before that, as he was awarded the Order of the British Empire (OBE) by her Majesty The Queen.

Fast forward to 2019! Having decided months before the February General Elections to retire from active politics, Dr. Smith is now back in private practice at his private Medical Clinic in Road Town.

His many happy and satisfied patients will be pleased to know that he is now available Mondays, Wednesdays and Thursdays 2:00pm-6:00pm and Tuesdays and Fridays 3:00pm-6:00pm.

So whether in a private or public capacity, this is Dr. Daniel Orlando Smith OBE, MB. BS. FRCS.

This is what you’ll find him doing – serving – Back to Origin. And his patients will tell you, he does it so well!

“It’s a good feeling to be practicing medicine and diagnosing and offering treatment that’s effective and I am happy to know that many of my old patients are still there to see me and of course, I welcome new ones,” he concluded.

Previous Article
Bananakeet Café – A Taste Bud Mini-Vacation
Next Article
Potter’s by the Sea, the Place to be

Potter’s by the Sea, the Place to be
Keiyia George November 24, 2019
© 2018 Copyright VI Life & Style Magazine. All Rights reserved. A product of Relyon Marketing Group.
X