5 Girls Ltd. Pursuit of Excellence for 10 Years and Counting 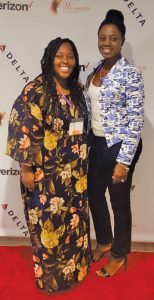 What began as an experiment to test an idea has become, ten years later, a flourishing business that has grown with its smart and ambitious owners, Leona Frett-George and Deirdre Frett.

In 2009 the young women expressed interested in starting a retail store in Tortola, native island to the entire Frett clan. They imported two shipping containers full of home and holiday goods for sale, which led to such a swift and enthusiastic success that 5 Girls, Ltd. was shortly thereafter born.

This year marks the tenth anniversary of this endeavor, and the sisters, reflecting on the journey that they have traveled, remarked on their best, proudest, and most accomplished moments.

5 Girls Ltd. is a partnership between two of 5 sisters, a name which represents the 5 daughters of their father (the other 3 sisters are interested in other pursuits). The idea for 5 Girls started with Leona, and she later invited her younger sister Deirdre to be her partner. Their father, Leando Frett, the owner of his own successful business, LJD VI Block, Ltd., for 18 years, was their initial investor. “We think it’s a blessing that he was able to help us get our start and we didn’t have to rely on loans,” said Leona, “but it wasn’t handed to us. We had to put in the work,” added Deirdre. 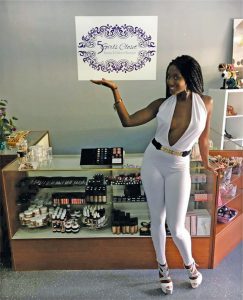 Once a man told Mr. Frett he felt sympathy for him because he has five daughters and no sons, time would prove that these intrepid and unstoppable women would be great assets. Having worked to convince him, they were serious; the girls began building their “Everything you need for home” business at the R&R Malone Center in Pockwood Pond, Tortola, in October of 2010. Modeling their father’s successful practices, they carved out their own uniquely young, black, and powerful approach to business, but in a feminine way.

5 Girls Ltd. is not a discount store. They offer a range of categories, selling quality products and premium brands they themselves would want to own. They offer the essentials, yet always something different and special. Today you will find apparel, small and large appliances, linens, home décor, gift ideas, beauty, hardware, recreation, stationery, books, and pet products. Customers agree. “5 Girls have products others don’t carry,” they say, “We always check 5 Girls first!” 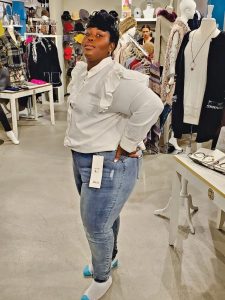 Leona and Deirdre, distinctively Caribbean with all the edge and unapologetic charm of Brooklyn, NY, where they were raised, approached their business as a lifestyle; one they planned to grow into and with, while staying involved with their community and championing their employees.

Unexpected challenges awaited them as they traveled to secure the goods, negotiated purchases, logistics, shipping, management, and operations. First, they were underestimated as young black women. Constantly challenged, second-guessed and even some harassment would follow them. They were accused of being figureheads but not practicing businesswomen. They were dismissed for being women, enduring shocking sexism and often blatant stereotyping. On one occasion, they were asked by a white male vendor how they were able to be educated and successful. Many encounters in business left them exhausted, defensive, and frustrated. They were judged, questioned about their credentials, ignored in the presence of men, and admonished that it was unladylike to stand or speak up for themselves or to question unfair treatment. “People would call us aggressive,” Deirdre said, “we had to have meetings to defend our assertiveness.” The sisters did not let these constant prejudices dissuade them in their mission.

They are committed to the success and independence of black women. They have empowered dozens within their company or as vendors or guest experts in various specialties such as fashion, beauty, or productivity. They encourage employees to think differently and learn. They invest in those who invest in themselves.

Not content to follow an established pattern, Leona and Deirdre have stuck to their own rhythm and trusted themselves. Leveraging the corporate foundation that was part of Leona’s previous career in marketing, Deirdre (with an original plan to work in health management) transferred those skills to 5 Girls, which enabled them to work in the interest of the community while serving their multiple needs. Viewing their service to the community not as an obligation but as an honour, they opened a second location in Fat Hog’s Bay, East End.

By this time, they relished in the adventure of venturing into new lanes, learning fast, and broadening their set expectations. They love to host store events and maximize their social media. You’ve probably seen flyers or heard radio ads. Being innovative through communications touches the heart of what they love to do, engage customers, and communicate. Introducing promotions such as Pay Day Deals, 5 Girls Friday’s, and pop-up shops were the Frett sisters’ brainchild. Often copied, few know how creative they have been with bringing new retail ideas to the Territory. One example, last fall’s Midnight Madness leveraged the midnight to 4 am window for holiday shoppers and included transportation, libations, and snacks for the deepest discounts of the season. They continued the festive feeling in their family setting and turned the holiday shopping idea into something entirely new for the Virgin Islands.

As entrepreneurs, they’ve also begun promoting themselves as individuals with speaking engagements and appearances in the VI and aboard. Thrust into this spotlight role, it’s important for them to show their true selves and let people, especially young women, know that what they have accomplished is achievable.

In 2017 when Hurricane Irma hit, 5 Girls was dealt a massive blow. With the loss of an entire location plus all of its inventory and home. The sisters rallied, not just to preserve what was left of their lives and business but to support the community. They initiated a relief drive, and BVI Friends and Family NY reached out to partner with them to extend their efforts. 5 Girls donated warehouse space, paid for shipping cost, and coordinated distribution efforts for two 45ft containers. 5 Girls made sure every district received something: clothing, food, school supplies, hygiene and cleaning products, or emergency supplies. Currently, 5 Girls is hosting a drive to assist them in feeding families in the community affected by COVID-19.

With their different outlook and work ethic, the ladies look forward to the future of 5 Girls and value their honed skills as leaders, entrepreneurs, innovators, managers, community partners, and savvy businesswomen. When asked what drives them forward and keeps them going, even in the face of challenges like the COVID-19 pandemic, they believe that change is a welcome necessity, not a reason to feel defeated. Having changed their business model (expanding online shopping options) overnight to accommodate the needs of a socially distanced retail landscape, both cite new lessons and surprising growth. “5 Girls is really stepping up and has really changed since the hurricane,” customers claim. “We got to a new level,” Leona said, “We know there is still so much more work to be done.”

Continue to Get More and Save More at 5 Girls Ltd!