Milton McLean had no plans of being at the helm of the Sea Cows Bay Basketball Club (SCBBC) he founded on April 1, 1994, after moving from East End to Sea Cows Bay, for no more than 5, maybe 6 years.

The club which started with a specific focus on developing 9-12 and 13-15-year-old players was organized to serve the people of the Third District which he had become a part of, after getting married.

“I recognized that when I moved to Sea Cows Bay and before that, Sea Cows Bay had never won a local basketball championship,” McLean reflected after the 25thanniversary year kicked off with the Martin Luther King Jr. Basketball Classic in January. “I thought that if I was to bring up some youths in basketball, eventually, they could win a championship which eventually happened with Run It Red. The idea was to bring them up from young, about nine in biddy basketball and by the time they’re finished with biddy basketball at fifteen, they could go into the local basketball league.”

After that, the retired Primary School teacher’s plan was to turn the club over to someone else., but, he’s still at the helm.  “I’ve tried quitting a few times, but every time I went around Tortola, I kept running into kids saying, ‘Mr. McLean, when is the next league, when we playing again?’ so I realized that the kids were enthusiastic, so I tried to work with them,” he pointed out.  “But, I surely didn’t see being involved in this for 25 years.”

Starting with players between nine and fifteen, you’re able to establish the basic fundamentals which are very important for success in whatever you’re doing. Older kids he noted, would have already established bad habits which are difficult to break, McLean noted.

In getting the club started, McLean recalled transportation was an issue—getting people from where they were on Tortola, East End, West End, Cane Garden Bay for example to Sea Cows Bay and they didn’t have sponsorship back then. “They always wanted to play, so I would go, get them and take them back,” he remembered.

In reflecting on SCBBC’s development, McLean said that over the years, they have had teams from all over Tortola and Virgin Gorda playing in their tournament and leagues. They have even accommodated 16-18-year-olds to play in their league because he saw the need for it. He said they went bit further and organized events for older players who did not have the skill level to play in the BVI Basketball Federation League. This initiative was the catalyst for the formation of the Hon. Julian Fraser Save the Seed League.

Teams such as Fire, Y2Y and Run It Red were groomed from the SCBBC events for the Federation’s league. Many players not from Sea Cows Bay, who have played in the BVIBF leagues, have gone on to college and are representing the Territory in regional competitions.

“If we had more community-minded folks who were going to have these various groups, then certainly, we would have been competing at a higher level,” McLean responded when asked about having similar organizations across the Territory. “You would have had more people in the pool to choose from for national teams and certainly, we would have been more successful to the point where you wouldn’t have to be scrambling to get a team. You would already have had a programme in place, where you’d have youth division, junior division teams established and ready to perform.”

McLean has also tried to develop girls’ basketball as well, but have not been successful. He thinks their location behind the Ellis Thomas Downs by the Wreck Shop in a secluded area and parents weren’t comfortable with their daughters in that area. 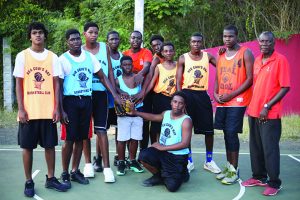 “We’ve had mentoring, referee clinics and have done a lot in basketball over the years,” McLean said, reflecting on the Showtime In Paradise Tournament for the 9-12 teams which was hosted on March 15-16 and included St. Thomas’ Nuff Respect and Zero Tolerance teams, as well other local 13-15 teams. “Then in April, we’re going to a 13-15 tournament in Orlando Florida. When we return, we’ll host a 9-12 tournament in late April. We will have a Summer League in June and in August and the Julian Fraser Save the Seed Basketball League. In November, we’ll have the Christmas League.”

Tags:
Previous Article
Fasting 101 – Part 1
Next Article
AUTISM – Light It Up for Autism